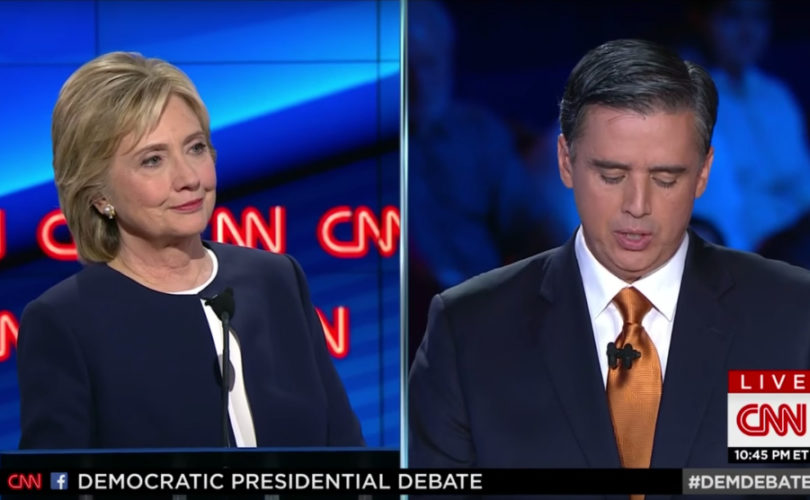 Updated at 1:42 p.m. EST to include remarks from March for Life officials.

LAS VEGAS, October 14, 2015 (LifeSiteNews) – In one of only two references to abortion in the entire Democratic debate, Hillary Clinton lambasted Republican efforts to investigate Planned Parenthood and restrict abortion-on-demand.

“It's always the Republicans or their sympathizers who say, 'You can't have paid leave, you can't provide health care.' They don't mind having big government to interfere with a woman's right to choose and to try to take down Planned Parenthood,” she said to boisterous applause from the Democratic audience.

“We should not be paralyzed by the Republicans and their constant refrain, 'big government this, big government that,' but except for what they want to impose on the American people,” she said.

The second reference to abortion last night came from former Rhode Island Governor and U.S. Senator Lincoln Chafee, a onetime “pro-choice Republican” who is polling at one percent of the vote or less.

“I open my record to scrutiny. Whether it's on the environment, a woman's right to choose, gay marriage, fiscal responsibility, aversion to foreign entanglements, using the tools of government to help the less fortunate — time and time again, I have never changed,” he said.” You're looking at a block of granite when it comes to these issues.”

Abortion and family issues received scant coverage in the first Democratic debate, moderated by CNN at the Wynn Hotel and Casino in Las Vegas – something that upset both sides of the issue.

“Abortion is the human rights abuse of today and should absolutely be a bipartisan issue,” said March for Life Education and Defense Fund President Jeanne Mancini. “It is truly sad that the life issues weren’t addressed head-on within the presidential debate last night, especially given that they featured prominently in the other two debates in recent weeks.”

“Clinton's remarks gained some of the biggest cheers of the night,” Cate Carejo wrote at Bustle. “If the audience of the debate is any indication, the Democratic Party stands with Planned Parenthood and with Clinton, at least on reproductive rights.”

Aside from a reference in Clinton's opening statement to “the continuing discrimination against the LGBT community,” homosexuality issues were all-but unexplored, a marked contrast to CNN's Republican debate, moderated by Jake Tapper.

Moderator Anderson Cooper made one glancing reference when he asked Clinton: “You were against same-sex marriage. Now you're for it. You defended President Obama's immigration policies. Now you say they're too harsh. You supported his trade deal dozen of times. You even called it the 'gold standard.' Now, suddenly, last week, you're against it. Will you say anything to get elected?”

The most tweeted line of the evening came from self-avowed democratic socialist Bernie Sanders, who said Hillary Clinton had been subjected to undue scrutiny over her e-mail server.

Federal authorities are investigating whether Clinton's use of a private server subjected national security secrets to the likelihood of espionage, as well as whether she tried to hide thousands of e-mail messages from Congressional inquiry.

“The American people are sick and tired of hearing about your damn e-mails,” Sanders said. Clinton, visibly moved, left her podium to embrace the Vermont socialist.