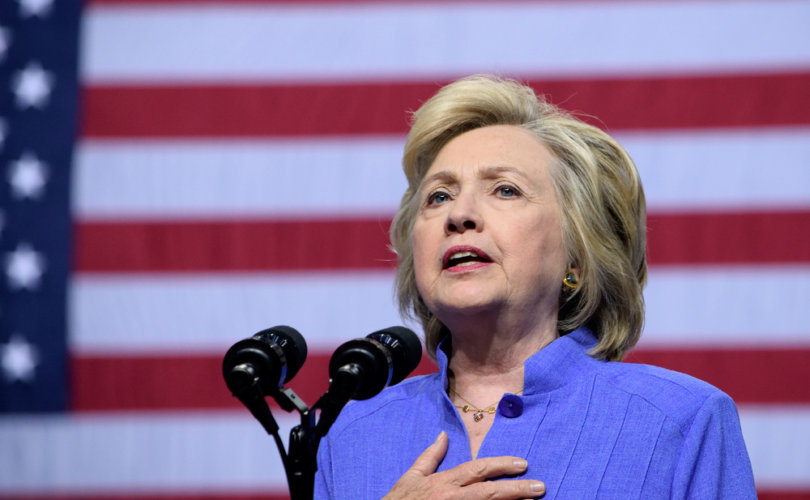 SALT LAKE CITY, August 22, 2016 (LifeSiteNews) – Hillary Clinton, who once said religious views that oppose abortion “have to be changed,” promised to defend religious liberty in an op-ed published on August 10 in a conservative Utah publication.

Employing language first used by President Obama, she wrote that “everyone has the right to worship however he or she sees fit.”

“I’ve been fighting to defend religious freedom for years,” she wrote. “As secretary of state, I made it a cornerstone of our foreign policy to protect the rights of religious minorities around the world — from Coptic Christians in Egypt to Buddhists in Tibet.”

While Secretary of State, the Obama administration covertly aided the Arab Spring uprising. After the Muslim Brotherhood’s presidential candidate, Mohamed Morsi, was elected president of Egypt in 2012, persecution of the nation’s 10-million-strong Coptic minority intensified.

After numerous references to Mormon history, she called religious freedom one of “the infinite blessings we have received from the Constitution of the United States.”

Religious beliefs against abortion “have to be changed”

Clinton's rhetoric and actions have not always backed up her written assertion that she champions freedom of conscience. Last April, Clinton told a conference that “religious beliefs” that condemn “reproductive rights” – which in her view include taxpayer-funded abortion-on-demand – “have to be changed.”

“Rights have to exist in practice, not just on paper. Laws have to be backed up with resources, and political will,” she said. “Deep-seated cultural codes, religious beliefs, and structural biases have to be changed.”

Both Clinton and the 2016 Democratic Party platform call for taxpayers to finance abortion globally.

No religious liberty on LGBT issues

Clinton has also voiced her opposition to religious beliefs that oppose homosexuality. In a December 2011 speech in Geneva, Clinton said perhaps the “most challenging issue arises when people cite religious or cultural values as a reason to violate or not to protect the human rights of LGBT citizens.” These objections, she said, are “not unlike the justification offered for violent practices towards women like honor killings, widow burning, or female genital mutilation.”

The global push for nations to accept the West’s view of homosexuality was one of Clinton’s defining foreign policy achievements, according to Foreign Affairs magazine, the publication of the Council on Foreign Relations.

Clinton renewed her opposition to conscience legislation late last month in an interview with the homosexual publication The Advocate. “The concerted effort underway in a number of states to discriminate against LGBT people under the guise of protecting religious freedom is something very different. It’s insincere and insidious,” Clinton said. “And we shouldn’t let it stand.”

The Democratic Party platform, crafted in part by Clinton-appointed delegates, also denies religious freedom to those who uphold traditional sexual morality. “We support a progressive vision of religious freedom that respects pluralism and rejects the misuse of religion to discriminate,” it states.

“Utahns should not be fooled”

Criticism of Clinton’s editorial came quickly. “Underpinning Hillary Clinton’s political philosophy is a coercive secularism that eliminates conservative Christians from public life. Should she win, she will not only force Christians to pay for contraceptives but also abortions, wrote George Neumayr at The American Spectator. “She will treat their schools and churches as the equivalent of Bob Jones University. She will court-martial chaplains and soldiers who don’t submit to her LGBT agenda.”

To the extent that Hillary supports religious freedom, it is directed towards Islam, which is engaged in a war on women,” he wrote.

Utah’s senior U.S. senator, Orrin Hatch, also weighed in with his own op-ed in the Deseret News.

“Utahns should not be fooled: Hillary Clinton is no friend of religious liberty. Her op-ed is a strategically crafted piece of political misdirection,” he wrote.

Sen. Hatch cited Clinton’s support for the HHS mandate, her condemnation of the Little Sisters of the Poor’s Supreme Court victory, and her “unapologetic support of the Equality Act — a sweeping bill that, if enacted, would do more to subvert the freedoms of religious believers than any piece of legislation in American history.”

“Utahns deserve to know Ms. Clinton’s full record on religious liberty — not just the whitewashed version she presented in the Deseret News,” he wrote.

The Clinton campaign has invested resources in Utah, where polls show her just behind Donald Trump. Independent presidential candidate Evan McMullin, a Mormon and favorite of the “Never Trump” movement, has strong roots in the area and is expected to campaign heavily in the state.

He said in a Fox News interview that he hopes to make a difference in numerous states.

Utah voters have not supported a Democrat for president since 1964.

‘Who are we to judge?’: Tolerance, widow-burning, and Planned Parenthood