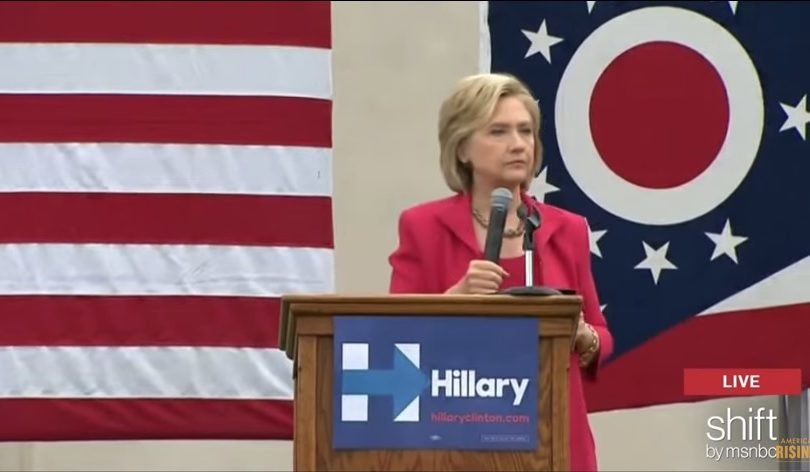 In a speech at Cleveland's Case Western University, Clinton likened the leading candidates of the Republican establishment to ISIS jihadists.

“I would like these Republican candidates to look the mom in the eye who caught her breast cancer early because she was able to get a screening for cancer, or the teenager who didn't get pregnant because she has access to contraception,” she said.

“Now, extreme views about women – we expect that from some of the terrorist groups. We expect that from people who don’t want to live in the modern world. But it’s a little hard to take coming from Republicans who want to be the president of the United States,” she said.

The Republican candidates, she said, “espouse out of date and out of touch policies. They are dead wrong for 21st century America. We’re going forward. We’re not going back.”

Backlash from the pro-life community was swift and unsparing.

“From President Obama calling Republicans ‘crazies’ to Hillary Clinton comparing pro-life Americans to terrorist groups, Democrats are engaging in gutter politics of the worst kind,” said Congresswoman Diane Black, R-TN. “Americans who oppose sending federal dollars to organizations that dismember and sell babies’ body parts for profit aren’t terrorists – they are compassionate, decent human beings. To be clear, these comments are disgusting and have no place in our political discourse.”

“Hillary Clinton must issue an immediate and unequivocal apology,” she said.

Susan B. Anthony List President Marjorie Dannenfelser also blasted Clinton's “outrageous comparison of pro-life Americans to terrorists,” calling it “a slap in the face to every American – whether Republican or Democrat, woman or man – who values the gift of life and support commonsense limits on abortion. She is shockingly out of touch.”

“Mrs. Clinton’s ridiculous comment reveals just how little she knows about pro-life Americans – approximately half of all voters- who strive to respect human dignity, preserve peace and secure human rights for the unborn,” said March for Life Education & Defense Fund President Jeanne Mancini. “Frankly, her words are particularly out of touch considering the abhorrent and nauseating practices of the abortion industry on full display in recent weeks.” The March for Life draws hundreds of thousands of participants each year.

Clinton's rhetoric took a familiar ring, as the Obama administration has issued multiple reports warning that supporting the right to life is a key characteristic of domestic terrorists.

The Republican Party hinted that the extreme rhetoric was an attempt to capture some of the enthusiasm Democrats have for her rival, Bernie Sanders. “For Hillary Clinton to equate her political opponents to terrorists is a new low for her flailing campaign. She should apologize immediately for her inflammatory rhetoric,” agreed Republican National Committee Press Secretary Allison Moore.

Dannenfelser said Clinton's remarks today will not bolster her electoral chances. “Doubling down on her support for unlimited abortion on-demand, up until the moment of birth, paid for by taxpayers, will not win voters to Clinton’s cause,” she predicted.