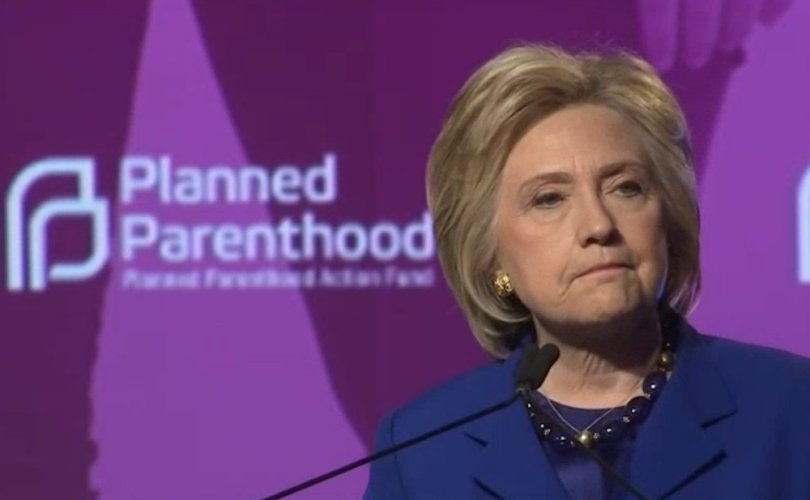 “I'm grateful to the entire Planned Parenthood family. You made this campaign your own,” the Democratic presidential nominee said at a speech before the Planned Parenthood Action Fund in Washington, D.C., on Friday. After specifically referencing the 1,000 volunteers who showed up for a Planned Parenthood training event in Pittsburgh last month, she continued.

“It belongs to the staff, the donors, and to the providers,” she said.

She specifically mentioned Dr. Amna Dermish, an abortionist in Texas who was caught on video laughing as she said that removing a baby's skull and brain intact is a goal she would “strive for.”

“Cecile really is the definition of grace under pressure,” Clinton said, adding that Richards had proved that “particularly over the last few years.”

She then pledged to march lockstep with the nation's largest abortion provider.

“I’ve been proud to stand with Planned Parenthood for a long time, and as president, I will always have your back,” Clinton said, repeating a promise she made when she spoke before the group in January – word-for-word.

She blasted “cruel, medically unnecessary waiting periods” and said that abortion-minded women must “walk past angry protesters to” obtain an abortion.

“It is worth saying again: defending women’s health means defending access to abortion – not just in theory, but in reality,” Clinton said, proposing that laws protecting taxpayers from funding abortion-on-demand be repealed – especially since it makes abortion “nearly impossible” for poor women, specifically “women of color.”

“We need to defend Planned Parenthood against partisan attacks,” she said. “If right-wing politicians actually cared as much about protecting women's health as they say they do, they'd join me in calling for more federal funding for Planned Parenthood.”

On Twitter Friday afternoon, her campaign doubled-down on her call for taxpayer-funded abortion, something that is opposed by a strong bipartisan coalition of 70 percent of Americans:

Defending women’s health means defending access to safe, legal abortion for all who need it—not just women who can afford it.

“I want to start by saying something you don’t hear often enough: Thank you,” she said.

Clinton's remarks triggered a counterprotest from numerous pro-life advocates including the Christian Defense Coalition, Operation Rescue, and Students for Life of America.

“We cannot be silent when it comes to standing for human rights and social justice for all,” said Rev. Pat Mahoney of the CDC.

Troy Newman, the president of Operation Rescue, agreed that pro-life voters “must stand against the Planned Parenthood/Clinton baby-killing cabal and expose their radical and barbaric abortion agenda to the public.”

Clinton received Planned Parenthood's endorsement in January and a pledge of up to $30 million in campaign spending, double what the organization spend in 2012, itself a record-breaking year.

In a passionate speech on Friday, Clinton hailed Planned Parenthood's support for “the transgender teens who come for an appointment and find the first place where they can truly be themselves.”

She also reiterated her support for the HHS mandate, which requires employers – including those with a conscientious objection – to provide contraception, sterilization, and potentially abortifacient drugs and devices to women with no co-pay.

“We need to stand up for access to affordable contraception without interference from politicians or employers,” she said. “And let's invest in long-acting contraceptives, so every woman can choose the method that is best for her.”

LARCs such as the IUD or Norplant have the potential to act as abortifacients.

Clinton also expressed support for a broad array of liberal policies, including paid family leave, “comprehensive immigration reform with a path to citizenship that keeps families together,” and gun control legislation.

“God forbid that Hillary Clinton should become president and serve as Planned Parenthood's puppet in the White House!” Newman said.