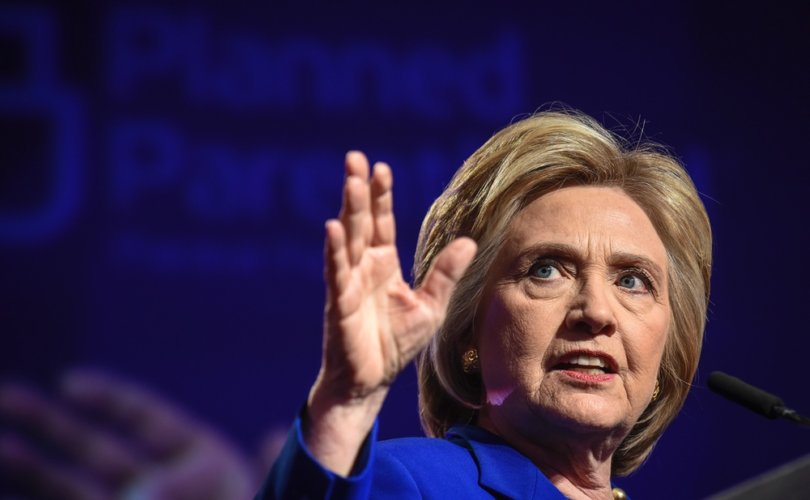 The former First Lady, New York senator, and Secretary of State was visiting Trinity College Dublin to receive an honorary doctorate in laws, the Irish Times reports. Clinton used the opportunity to recognize the “grassroots” pro-abortion movement, and went so far as to call abortion legalization “inspiring.”

“Anyone who cares about preserving a democratic future must recognize that we need to do a better job of making democracy work for young people,” Clinton said. “I’ve also seen what’s possible when young people participate, and make your voices heard. The Irish abortion referendum was an inspiring sight.”

“Airports were mini-rallies with cheering and colourful banners greeting citizens who came as far away as from Japan, Australia and, of course, America,” she went on. “On the day of the vote one of the strictest laws in the world was overturned with nearly 87 percent of 18- to 25-year-olds voting ‘yes.’”

On May 25, the Irish people voted 66% to 33% to repeal the country’s 8th Amendment, which recognized a preborn right to life deserving of equal protection. Repeal did not directly legalize abortion, but cleared a path for a government proposal to legalize elective first-trimester abortions, with later abortions supposedly limited to medical emergencies or fatal fetal abnormalities.

Despite pro-abortion campaigners’ promises of a moderate abortion law, the government followed up repeal by announcing plans to force Catholic hospitals to perform abortions, force taxpayers to fund them, force general practitioners to provide abortion referrals, and block pro-lifers from praying, protesting, or counseling outside abortion facilities.

“We are living through an era when fundamental rights, civic virtue, even facts and reason are under assault like never before,” Clinton claimed, blasting President Donald Trump for the temporary separation of illegal alien parents from children at the southern border.

“Yet even in this dark hour we are witnessed an outpouring of moral conviction, civic engagement and lasting commitment to stand up for the most vulnerable among us,” added Clinton, who has previously called abortion a “human right” and voted against banning partial-birth abortions.

Throughout her speech, Clinton made it a recurring point to stoke millennials’ self-image as principled idealists, declaring that “no demographic is better positioned to be a force on the side of democracy, progress, and equality,” and assuring them she is “filled with confidence that you will be able to answer these questions and build a better world than the one we’re leaving in your lap.”

While the pro-abortion side’s margin of victory revealed an undeniable depth of popular support for repeal, Clinton’s depiction of the campaign as a grassroots movement downplays the support abortion enjoyed from powerful organizations and elite public figures.