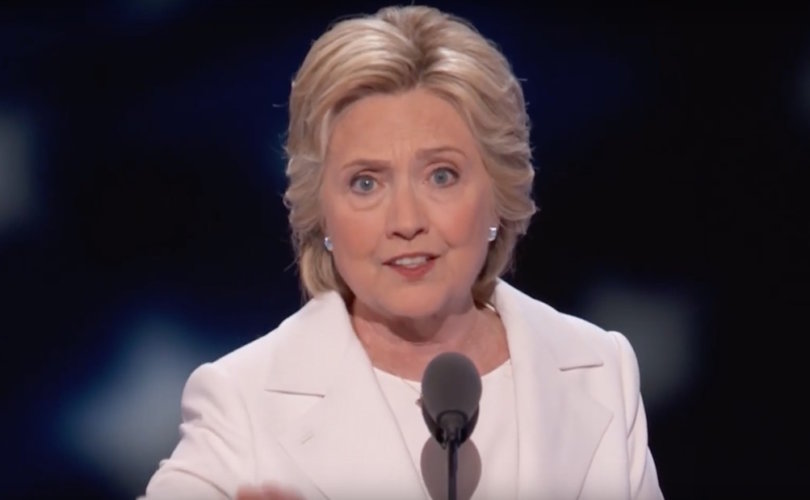 Wearing an all-white pantsuit, Clinton spent much of her speech telling delegates inside Philadelphia’s Wells Fargo Center that Donald Trump would divide Americans and debuted the slogan, “Stronger Together.”

However, she first had to sew up the rift in her own party between herself and supporters of Vermont Senator Bernie Sanders.

She implored his followers to join her campaign in a display of Democratic unity.

“That's the only way we can turn our progressive platform into real change for America,” she said. “We wrote it together – now let's go out there and make it happen together!”

The 2016 Democratic Party platform, drafted in concert between Clinton and Sanders delegates, has been described as the most pro-abortion platform in the party’s history.

“We will continue to stand up to Republican efforts to defund Planned Parenthood health centers, which provide critical health services to millions of people,” it says. “We will continue to oppose—and seek to overturn—federal and state laws and policies that impede a woman’s access to abortion, including by repealing the Hyde Amendment,” as well as the Helms Amendment, which protect taxpayers from funding abortion-on-demand in the United States and worldwide, respectfully.

Otherwise, the speech’s references to abortion were few and far between, from a candidate who began and ended her primary campaign before the Planned Parenthood Action Fund, staffed her campaign with former employees of the abortion lobby, and said her presidential campaign “belongs” to Planned Parenthood. The nationally televised speech was an opportunity to draw a contrast with Trump, whom she implied was a racist megalomaniac.

During a litany of issues, she said, “If you believe we should protect a woman’s right to make her own health care decisions, then join with us.” She added, “We will defend all our rights – civil rights, human rights and voting rights, women's rights and workers' rights, LGBT rights and the rights of people with disabilities!”

Both terms in pro-abortion circles imply unrestricited, taxpayer-funded abortion and “no-cost contraception,” which is also endorsed by the platform.

Aside from a handful of references, Clinton left most of the abortion advocacy on the fourth and final night of the Democratic National Convention to surrogates.

“We refused to back down until the FDA did their job and put science, and women, first,” she said. “Now, women across America are free to choose safe emergency contraception,” which has the capacity to act as an abortifacient.

Gov. Andrew Cuomo of New York – who began by acknowledging his late father, Mario – warned that Republicans would take America back to an era “before Roe v. Wade.”

Nancy Pelosi told delegates “what is on the line in what truly is the most important election of our lifetime” is “the future of the Supreme Court” as well as “women’s reproductive rights.”

She closed, “Onward to victory!”

There had been no shortage of abortion talk, as the DNC heard from the leaders of every major abortion lobbying organization in the United States: Planned Parenthood CEO Cecile Richards, NARAL Pro-Choice America President Ilyse Hogue, and EMILY’s List President Stephanie Schriock.

“Hillary Clinton has made a bet that American voters – and especially women and Democrats – put a premium on abortion,” said Susan B. Anthony List President Marjorie Dannelfelser. “This week she doubled down, trotting out the abortion industry’s most vocal advocates to make the case that our country wants and needs abortion on-demand, up until the moment of birth, paid for by taxpayers. But this bet is belied by the data, including a new Marist poll released this week which found a majority of Americans (62 percent) oppose taxpayer funding of abortion.”

As Democrats wrapped up their convention, Republican Vice Presidential candidate Mike Pence told a crowd in Grand Rapids that he is still confident one day “we’ll see Roe v. Wade consigned to the ash heap of history where it belongs.”