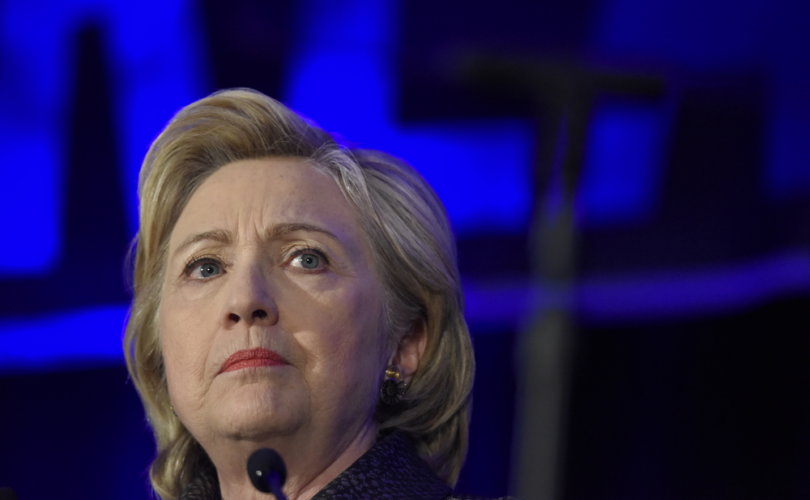 WASHINGTON, D.C., July 5, 2016 (LifeSiteNews) – Hillary Clinton says she is “proud” of Barack Obama's decision to allow transgender people to serve openly in the military and reiterated her support for a conscience-crushing bill that the LGBT lobby places as its highest legislative priority.

“I am proud of the decision to lift the ban on allowing transgender troops to serve openly in the military,” Clinton said in comments e-mailed to The Washington Blade, a D.C.-based LGBT news outlet.

“This decision will allow thousands of brave soldiers who are deeply committed to defending our nation to serve with dignity and respect. Having the world’s best military doesn’t just mean having the best-trained, best-equipped forces or the biggest arsenal — it also means being a leader on issues of equality and opportunity,” Clinton said in her statement.

She added that “we need to finally pass the federal Equality Act and end discrimination against LGBT Americans once and for all in employment, housing, and other aspects of public life.”

The Equality Act would amend the 1964 Civil Rights Act to add sexual preference and gender identity to such protected categories as race, sex, and religion.

People of faith say that would chill their expression. Andrew Walker, the director of policy studies for the Southern Baptist Convention’s Ethics and Religious Liberty Commission, said the Equality Act “paves over the consciences of those who cannot in good faith condone conduct they believe to be immoral by providing services for a same-sex wedding ceremony. Again, such conflicts arise not over the personhood and dignity of an LGBT customer, but over participation in particular conduct that some find morally unacceptable.”

The Obama administration has been enforcing civil rights laws as though they cover homosexuals and transgender people. Most recently, the president announced that the Department of Education would interpret a 1972 civil rights law as though it applied to transgender people, requiring public schools and universities intimate facilities to members of the opposite biological sex or risk losing federal funding.

Adding gender identity to the landmark 1964 legislation would codify that practice into law.

Last October, Clinton told a bisexual college student at Keene State College in New Hampshire that she would make passing the Equality Act her “highest priority” as president.

It may be one area where the two major parties' presidential candidates agree.

In February 2000, Donald Trump told The Advocate, another LGBT publication, “I like the idea of amending the 1964 Civil Rights Act to include a ban of discrimination based on sexual orientation.”

He has not formally stated his position on the bill this election season.