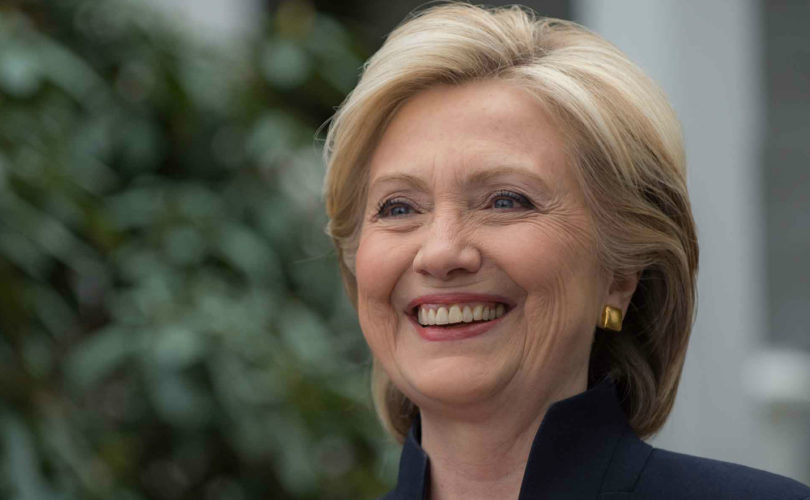 NEW YORK CITY, April 24, 2015 (LifeSiteNews.com) – Speaking to an influential gathering in New York City on Thursday, Hillary Clinton declared that “religious beliefs” that condemn “reproductive rights,” “have to be changed.”

“Yes, we've cut the maternal mortality rate in half, but far too many women are still denied critical access to reproductive health,” Hillary told the Women in the World Summit yesterday.

Liberal politicians use “reproductive health” as a blanket term that includes abortion. However, Hillary's reference echoes National Organization for Women (NOW) president Terry O’Neill's op-ed from last May that called abortion “an essential measure to prevent the heartbreak of infant mortality.”

The Democratic presidential hopeful added that governments should throw the power of state coercion behind the effort to redefine traditional religious dogmas.

“Rights have to exist in practice, not just on paper. Laws have to be backed up with resources, and political will,” she said. “Deep-seated cultural codes, religious beliefs, and structural biases have to be changed.”

She also cited religious-based objections to the HHS mandate, funding Planned Parenthood, and the homosexual and transgender agenda as obstacles that the government must defeat.

“America moves ahead when all women are guaranteed the right to make their own health care choices, not when those choices are taken away by an employer like Hobby Lobby,” she said. The Supreme Court ruled last year that closely held corporations had the right to opt out of the provision of ObamaCare requiring them to provide abortion-inducing drugs, contraceptives, and sterilization to employees with no co-pay – a mandate that violates the teachings of the Catholic Church and other Christian bodies.

Clinton lamented that “there are those who offer themselves as leaders…who would defund the country's leading provider of family planning,” Planned Parenthood, “and want to let health insurance companies once again charge women just because of our gender.”

“We move forward when gay and transgender women are embraced…not fired from good jobs because of who they love or who they are,” she added.

It is not the first time the former first lady had said that liberal social policies should displace religious views. In a December 2011 speech in Geneva, then-Secretary of State Hillary Clinton said perhaps the “most challenging issue arises when people cite religious or cultural values as a reason to violate or not to protect the human rights of LGBT citizens.” These objections, she said, are “not unlike the justification offered for violent practices towards women like honor killings, widow burning, or female genital mutilation.”

While opinions on homosexuality are “still evolving,” in time “we came to learn that no [religious] practice or tradition trumps the human rights that belong to all of us.”

Her views, if outside the American political mainstream, have been supported by the United Nations. The UN Population Fund stated in its 2012 annual report that religious objections to abortion-inducing drugs had to be overcome. According to the UNFPA report, “‘duty-bearers’ (governments and others)” have a responsibility to assure that all forms of contraception – including sterilization and abortion-inducing ‘emergency contraception’ – are viewed as acceptable – “But if they are not acceptable for cultural, religious or other reasons, they will not be used.”

Two years later, the United Nations' Committee on the Rights of the Child instructed the Vatican last February that the Catholic Church should amend canon law “relating to abortion with a view to identifying circumstances under which access to abortion services may be permitted.”

At Thursday's speech, Hillary called the legal, state-enforced implementation of feminist politics “the great unfinished business of the 21st century,” which must be accomplished “not just for women but for everyone — and not just in far away countries but right here in the United States.”

“These are not just women's fights. These have to be America's fights and the world's fights,” she said. “There's still much to be done in our own country, much more to be done around the world, but I'm confident and optimistic that if we get to work, we will get it done together.”

“Never before have we seen a presidential candidate be this bold about directly confronting the Catholic Church's teachings on abortion,” said Bill Donohue of the Catholic League.

“In one sense, this shows just how extreme the pro-abortion caucus actually is,” Ed Morrissey writes at HotAir.com. “Running for president on the basis of promising to use the power of government to change 'deep seated cultural codes [and] religious beliefs' might be the most honest progressive slogan in history.”

He hoped that, now that she had called for governments to change religious doctrines, “voters will now see the real Hillary Clinton, the one who dismisses their faith just the same as Obama did, and this time publicly rather than in a private fundraiser.”

Donohue asked Hillary “to take the next step and tell us exactly what she plans to do about delivering on her pledge. Not only would practicing Catholics like to know, so would Evangelicals, Orthodox Jews, Muslims, and all those who value life from conception to natural death.”

You may watch Hillary's speech below.

Her comments on religion begin at approximately 9:00.