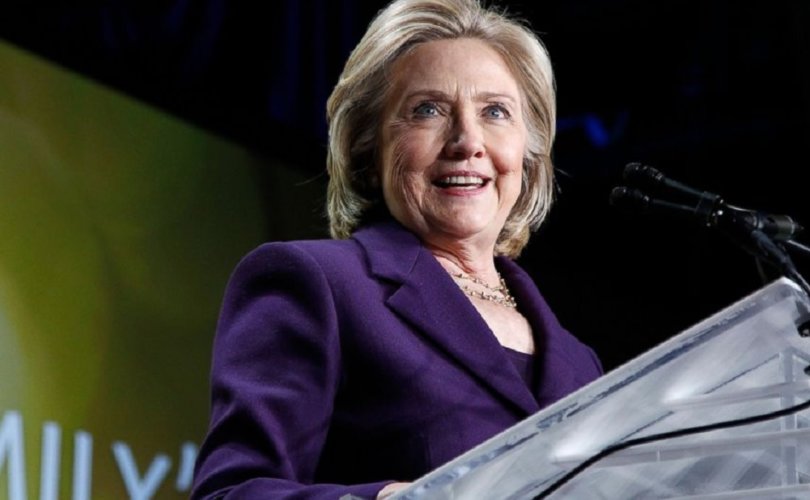 WASHINGTON, D.C., June 10, 2016 (LifeSiteNews) – In her speech to the Planned Parenthood Action Fund on Friday afternoon, Democratic presidential candidate Hillary Clinton saluted an abortionist caught saying that she will “strive” to remove an unborn child's skull and brain intact.

The abortionist also described how she performs a potentially illegal abortion procedure.

Clinton began her 27-minute speech by singling out abortion “providers like Dr. Amna Dermish in Texas, who called out Donald Trump when he said women should be punished for having abortions.”

Clinton said Dermish's online article defending the inviolable right to choose abortion-on-demand “should be required reading for every politician in America.”

But Dermish is also known for other words she uttered on video to undercover investigators with the Center for Medical Progress (CMP).

Decapitation “something to strive for”

During a meeting at an abortion conference on October 12, 2014, Dermish laughed as she said removing an aborted baby's skull and brain intact will “give me something to strive for.”

Dermish, an abortionist with Planned Parenthood of Greater Texas in Austin, described how a PPGT point of care person will sort through aborted babies' organs after an abortion, because she's “really into organ development.”

“She'll pull out, like, kidneys and heart,” Dermish tells Daleiden. “The heart we frequently see at nine weeks. She always looks for it.”

“Well, it's cute,” another abortion worker, from Whole Women's Health in Texas, interjected.

“I have so much respect for [fetal] development,” Dermish said in the video, adding that the growth of unborn children in the womb is “just so incredible.”

In the same video, she admitted she sometimes performs a technique that may be a partial birth abortion, “because it's easier to get” the organs that buyers have requested.

Dermish admitted that she converts the child undergoing the abortion to a breech (feet-first) presentation and then she will “remove the extremities first – the lower extremities – and then go for the spine,” before terminating the unborn child.

That may be a form of partial birth abortion, which is a federal felony punishable by two years in prison and a fine of $250,000.

Dermish said she “trained with” Dr. Deborah Nucatola, the senior director of medical services at Planned Parenthood, who was filmed sipping wine and munching salad in CMP's first video.

In that video, Nucatola acknowledged that she performs the same technique for Planned Parenthood in Los Angeles. She said that, while partial birth abortion is illegal, “laws are up to interpretation…so, if I say on day one that I don't intend to do this, what ultimately happens doesn't matter.”

As a U.S. senator, Hillary Clinton voted against the partial birth abortion ban.