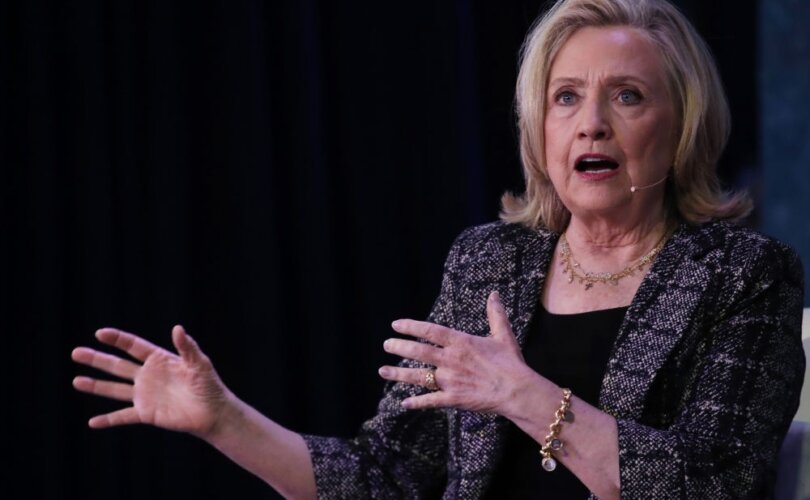 Clinton, 75, who served as U.S. Secretary of State during the Obama administration from 2009 to 2013 after her role as First Lady to husband Bill Clinton from 1992 to 2000, made the remarks during a Thursday interview with Christiane Amanpour on PBS.

According to Clinton, pro-life wins like the historic rollback of Roe v. Wade by the U.S. Supreme Court in June are evidence that “progress … has been taken for granted.”

“We have come a long way on so many fronts, but we are also in a period of time where there is a lot of pushback and much of the progress that has been taken for granted by too many people is under attack: literally under attack in places like Iran or Afghanistan or Ukraine – where rape is a tactic of war – or under attack by political and cultural forces in a country like our own when it comes to women’s health care and bodily autonomy,” Clinton said.

It’s unclear how moves to protect preborn babies from dismemberment and murder are similar to reported brutal sexual assaults by Russian soldiers, or Middle Eastern governments’ draconian prohibitions on women working outside the home, attaining an education, or going outside without a head covering.

No pro-life laws impose criminal or civil punishments for abortion-seeking women, and the Supreme Court’s decision to overturn 49 years of national abortion precedent merely sent the matter back to the states. Instead, the laws simply work to save the lives of preborn human beings, many of whom are female.

Regardless, Clinton argued “we have work to do to try to defend our rights, to stand up for them.”

“And what we’ve seen, particularly since the Dobbs decision across our country, is that when voters – both men and women, but led by women – have a chance to vote on these draconian abortion restrictions they do not accept them,” she said.

Since the Supreme Court overturned Roe v. Wade in its landmark Dobbs v. Jackson Women’s Health Organization decision in June, a bevy of Republican-led states have enacted crucial legislative protections for the unborn. In 13 states, the practice is almost entirely banned, thanks to a combination of trigger laws, pre-Roe abortion bans, and post-Dobbs pro-life measures.

In October, data shared with statistical analysis site FiveThirtyEight indicated that statewide pro-life laws had saved more than 10,000 unborn babies in the first two months alone after the Court handed down its Dobbs decision.

Despite a series of significant wins, however, the pro-life movement has been challenged by a strong pro-abortion response to the Dobbs decision made manifest in the November 8 election, National Review pointed out.

2022 ballot measures in California, Vermont, and Michigan that were aimed at making abortion a statewide right passed, and those in Kentucky and Montana that were meant to enshrine protections for the unborn failed.

However, LifeSite’s Raymond Wolfe pointed out Thursday that pro-life and pro-family conservatives still scored big wins in the 2022 midterms, with all 13 Republican governors who signed abortion restrictions easily securing re-election.

Meanwhile, Clinton’s Thursday comments were far from the first remarks she has made attacking the pro-life movement and its members.

In June immediately after the reversal of Roe, Clinton blasted conservative pro-life Justice Clarence Thomas, who signed on to the 5-4 decision to overturn the precedent. Clinton accused Thomas of being “a person of grievance for as long as I have known him — resentment, grievance, anger.”

Clinton also claimed the rollback of Roe would result in the deaths of women, without remarking on the deaths of unborn babies in every successful abortion and the risks to pregnant moms occasioned by botched but legal procedures.