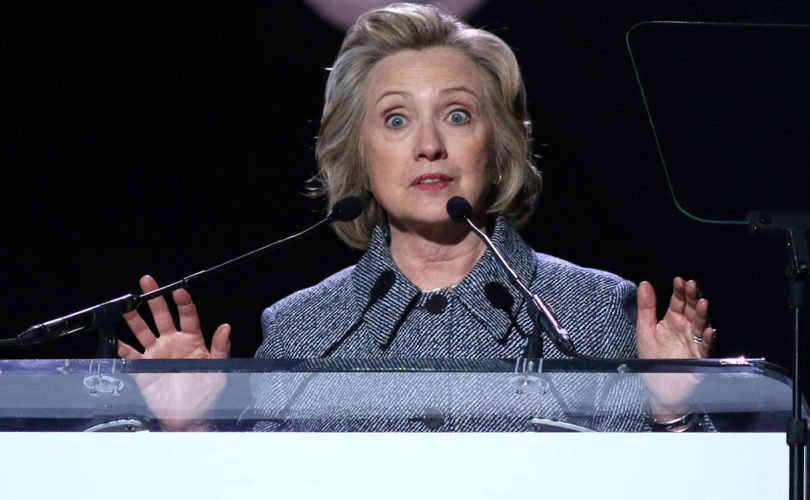 DERRY, NH, February 5, 2016 (LifeSiteNews) – Hillary Clinton has a litmus test for Supreme Court nominees – several, in fact. At a Democratic event on Wednesday, Clinton unveiled her criteria in selecting a judge for the nation's highest court.

“We’ve got to make sure to preserve Roe v. Wade, not let it be nibbled away or repealed,” she said.

There have been over 58,000,000 abortions since the 1973 court ruling legalizing abortion in all 50 states, according to National Right to Life.

That echoes her recent call to arms speech before Planned Parenthood last month, when she stated that taxpayers must fund abortion-on-demand in order to uphold the “right” of choice.

“We have to preserve marriage equality,” Clinton said, referring to last summer's Obergefell v. Hodges case, a 5-4 ruling that redefined marriage nationwide. “We have to go further to end discrimination against the LGBT community.”

Her views differentiate her from the Republican front runners. Ted Cruz has called the court's marriage ruling “fundamentally illegitimate,” and Donald Trump told Fox News Sunday this week that he would “be very strong on putting certain judges on the bench that I think maybe could change things.” Marco Rubio has said he won't “concede” the issue to the one-vote majority.

All Republican presidential hopefuls say they are pro-life and will defund Planned Parenthood.

Her husband, Bill Clinton, raised the makeup of the Supreme Court early last month in New Hampshire, saying it receives “almost no attention” as a campaign issue.

On Wednesday, Hillary said “the next president could get as many as three appointments. It’s one of the many reasons why we can’t turn the White House over to the Republicans again.”

Clinton said her judicial appointees must also reverse the Citizens United ruling on campaign finance and oppose a recent decision striking down a portion of the 1965 Voting Rights Act. In 2013's Shelby County v. Holder, justices struck down Section 4(b) of the act, which said that certain states and jurisdictions had to obtain permission from the federal government before changing their voting laws.

At one time, most politicians frowned upon any “litmus test” for judicial nominees, emphasizing the independence of the third branch of government. “I don't believe in litmus tests,” Jeb Bush told Chuck Todd last November.

But with the rise of an activist judiciary in the middle of the 20th century, constitutionalists have sought to rein in the power of the bench.