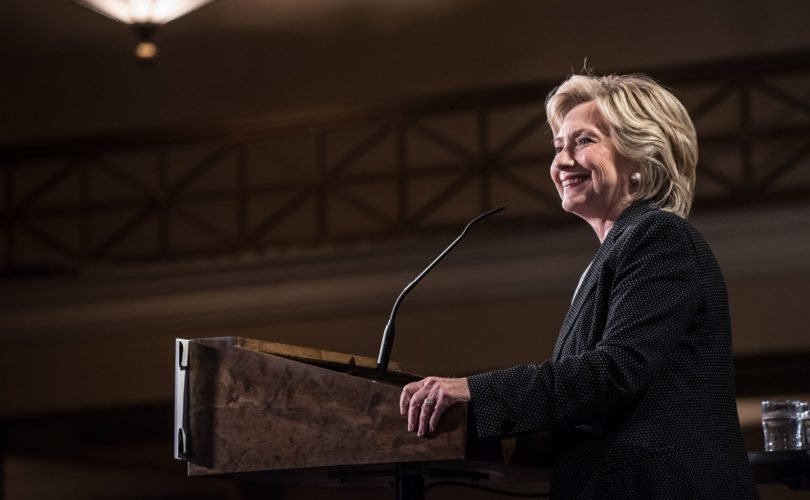 HOOKSETT, NH, January 11, 2016 (LifeSiteNews) – As it is facing an ongoing investigation that its national leaders have violated multiple federal felonies, Hillary Clinton told Planned Parenthood on Sunday, “I will always have your back.”

Clinton spoke in New Hampshire to a rally where she officially accepted the Planned Parenthood Action Fund's 2016 presidential endorsement, the first time the abortion industry has endorsed a candidate during a primary.

“Planned Parenthood should be funded, supported, and appreciated,” Clinton told a crowd of feminist activists in Hooksett, New Hampshire, “not undermined, misrepresented, and demonized.”

The Democratic front runner even referenced the testimony CEO Cecile Richards gave before a special Congressional committee investigating allegations that Planned Parenthood illegally profits from the sale of fetal organs and tissue to researchers.

“For five hours, Republicans bullied and blustered. Cecile never flinched. She just told them the facts,” she said. One of those factsRichards told was that Planned Parenthood does not perform mammograms – something she had falsely asserted on CNN years earlier.

The former first lady added that she would “shudder” at America's future if the GOP wins the election in November.

“We know if Donald Trump or Ted Cruz have their way we’ll back in the Stone Age,” she said. “But we've got our sights set on the future.”

She said “the next president would easily appoint more than one justice to the Supreme Court,” an issue raised by her husband last week.

“Access to affordable birth control is still hanging in the balance at the Supreme Court,” Mrs. Clinton said on Sunday. “If a Republicans wins this election and gets the chance to stack the Supreme Court with right-wing justices, together they will accelerate the move to take America in the wrong direction on so many issues.”

Sen. Clinton, who faces a burgeoning series of scandals and, according to some, a possible indictment over her mishandling of classified information, used the speech to emphasize her electability.

“We need a Democratic nominee who will be able to beat the Republicans and get the job done for Americans,” she said. She unsuccessfully employed a similar tactic against Barack Obama in 2008.

She faces a bumpy path in the early primary states eight years later, littered with new allegations of influence peddling, misleading the American people about the attack on the U.S. Embassy in Benghazi, and attacking women who accused her husband of sexual harassment or rape. A Wall Street Journal/NBC News/Marist poll found her rival, Bernie Sanders, within striking distance in Iowa and four points ahead of Hillary in New Hampshire.

“I need your help, starting here in the New Hampshire primary and Iowa caucus,” she told the crowd of feminists clothed in pink.

Richards plans to furnish the help Clinton needs, saying she “could never remember a time where there is a stronger candidate for president on the issues that are fundamental to Planned Parenthood.”

The group plans to spend $20 million between now and this fall to support the Democratic presidential nominee, as well as pro-abortion Democrats in a series of Senate races in battleground states.