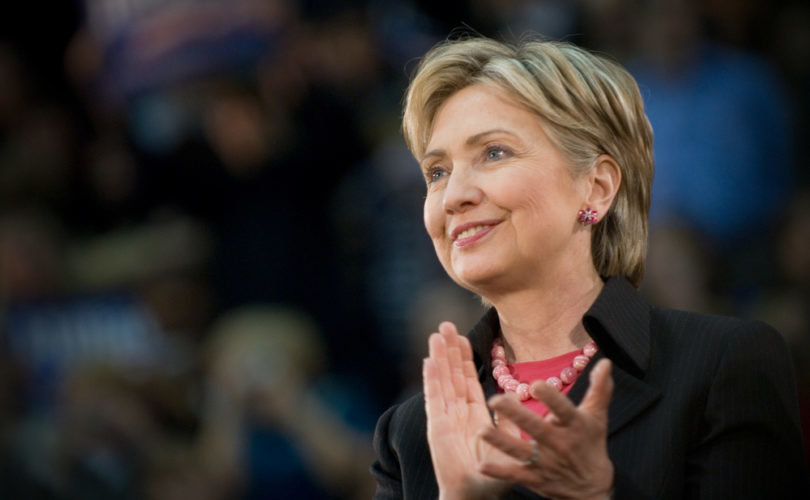 “At the risk of appearing predictable, the Bible was and remains the biggest influence on my thinking," said Clinton.mistydawnphoto/Shutterstock

WASHINGTON, D.C. – Hillary Clinton, a likely 2016 Democratic presidential candidate who supports abortion-on-demand and redefining marriage, says her thought process is “guided” by the Bible more than any other book or “influence.”

The former first lady made her comments during an interview with the New York Times Sunday Book Review on June 11. When asked about her favorite book, she said, “At the risk of appearing predictable, the Bible was and remains the biggest influence on my thinking. I was raised reading it, memorizing passages from it, and being guided by it. I still find it a source of wisdom, comfort, and encouragement.”

However, just last week, she told NPR host Terry Grossu that “too many people [who oppose redefining marriage] believe they have a direct line to the Divine.”

Rob Schwarzwalder, senior vice president at Family Research Council, told LifeSiteNews that he wished Mrs. Clinton consistently allowed the Bible to shape her worldview. “Mrs. Clinton is right that the Bible is a source of ‘wisdom, comfort and encouragement.’ However, it is also God’s revelation of Himself in Jesus Christ and of His unchanging moral commands regarding the way we live our lives and the values we should espouse,” he said. “We can hope and pray that Mrs. Clinton will recognize the latter, even as she affirms the former.”

“At the risk of appearing predictable, the Bible was and remains the biggest influence on my thinking. I was raised reading it, memorizing passages from it, and being guided by it.”

Throughout her four decades in the public spotlight, Clinton has tirelessly promoted abortion-on-demand as a fundamental “human right” and the acceptance of homosexual behavior at home and abroad.

She was a decades-long friend and onetime patient of Dr. William F. Harrison, an Arkansas doctor who boasted of committing at least 20,000 abortions. She has referred to herself as ardently “pro-choice.”

She campaigned for her husband to sign executive orders repealing the Mexico City Policy, which barred U.S. funding of abortion advocacy around the world, mere days after his inauguration. She pressured the United Nations to define abortion as a human right at the 1994 International Conference on Population and Development and the Fourth World Conference on Women in Beijing in 1995.

In his second term, President Clinton said that he and Hillary prayed together before he vetoed the national partial birth abortion ban. His successor, George W. Bush, would sign the measure into law in 2003.

As President Obama's secretary of state, she led the Obama administration's international push to normalize homosexual behavior worldwide, placing religious objections to homosexuality in the same category as honor killings and widow burning.

Clinton, who has said she is “really in awe” of Planned Parenthood founder Margaret Sanger, is expected to be the frontrunner for the 2016 Democratic presidential nomination.