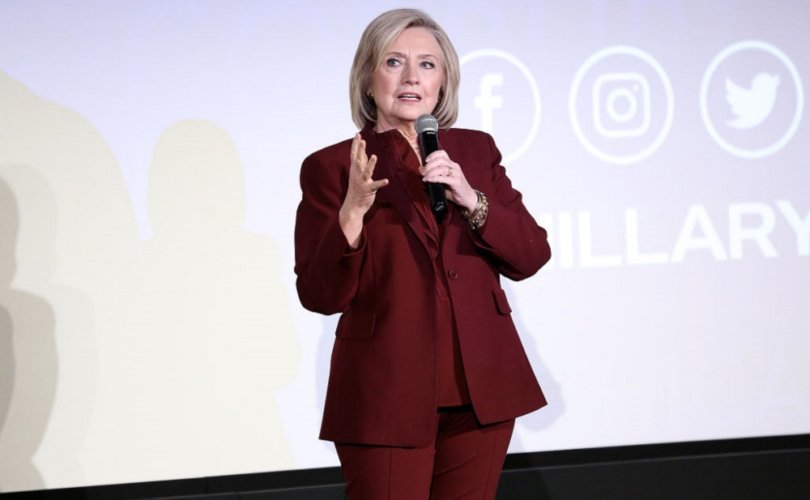 October 6, 2020 (LifeSiteNews) — Former Democratic presidential candidate Hillary Clinton said in a podcast interview that young people are leaving the church because Christianity is “so judgmental, so alienating.”

During the course of her podcast, after she claimed to be a follower of Jesus, Clinton insisted that “Jesus and justice are the same thing,” declaring that Black Lives Matter  — whose manifesto reveals the organization to be anti-Christian and anti-family — is a “theological statement” and suggested that the U.S. is now at an important moral inflection point, the result of a “very deliberate, concerted effort by one political party to basically try to own Christianity.”

“When you think about what's happening in our country right now, do you see that maybe we are finally going to have the moral reckoning that has been distorted and perverted and postponed for so long?” she asked her guest.

“This should also be a time for the church to take a hard look at itself and try to figure out how it can be a real partner in this moment of moral awakening,” said Clinton, asserting that Christian churches should be defined by social justice.

“A lot of young people are leaving the church, in part because the way they understand what Christianity has become is, you know, so judgmental, so alienating,” claimed Clinton.

During her 2016 campaign for president, Clinton said supporters of then-candidate Trump were “deplorables.” Not long after that statement, hacked emails from then–Clinton campaign chairman John Podesta revealed that top Clinton advisers held that Catholic beliefs are “backwards” and conservative Catholics were responsible for “an amazing bastardization of the faith.”