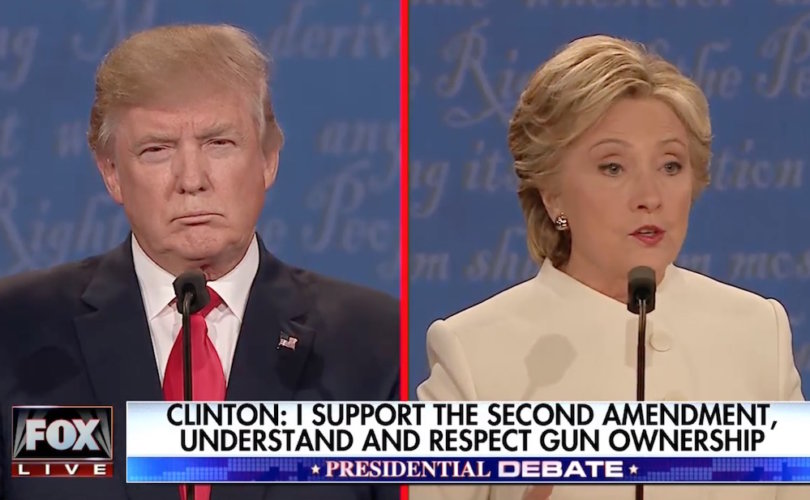 “For the first time Hillary Clinton was pressed to own up to the fact that there is not one circumstance in which she would protect the right to life of an unborn child,” said Susan B. Anthony List President Marjorie Dannenfelser, “even a baby who is moments from birth.”

Donald Trump, who said Roe v. Wade would be overturned during his presidency, attacked Clinton’s support for abortion-on-demand throughout all nine months of pregnancy.

Clinton dismissed his statements as “scare rhetoric.” But pro-life advocates say she is minimizing the real horrors of abortion.

“The facts are that babies actually are torn limb from limb by dismemberment abortions,” said Fr. Frank Pavone, national director of Priests for Life. “To say they are ‘ripped from the womb’ is not ‘scare rhetoric,’ it’s simply descriptive of what happens in abortions.”

Secretary Clinton also implied that China had ended the practice of forced abortion to curtail excess population. “I’ve been to countries where governments either forced women to have abortions, like they used to do in China,” she said.

“As for the claim that China does not perform forced abortions on women anymore, human rights experts will vehemently disagree,” Fr. Pavone said.

One such activist and expert, Reggie Littlejohn of Women’s Rights Without Frontiers, called Secretary Clinton’s statement “untrue and deeply disappointing.” Littlejohn cited the case of a Chinese couple whom communist authorities forced to abort their baby at eight months in August.

The former secretary of state did not retract her statement that unborn children have no constitutional right to life, nor her support for the illegal practice of partial birth abortion – a method of abortion even her husband Bill Clinton privately opposed, according to his biographer. Taylor Branch said the president said, “I believe that if you can’t make up your mind in the first six months, you don’t have the right to have an abortion.”

A mother doesn’t have an unalienable right to “crush her baby’s skull,” said President Clinton, who vetoed the partial birth abortion ban.

“[Hillary] Clinton’s position on abortion is wildly out of step with the majority of Americans who support a compassionate limit on abortion,” said Dannenfelser. “In pressing Clinton to state her opinion about the reality of the abortion procedure, Donald Trump did a service to all Americans.”

“On this issue the contrast between the two candidate could not be more clear,” she said.

Bill Clinton shock quote: no ‘right’ for woman to ‘crush her baby’s skull’ in late-term abortion