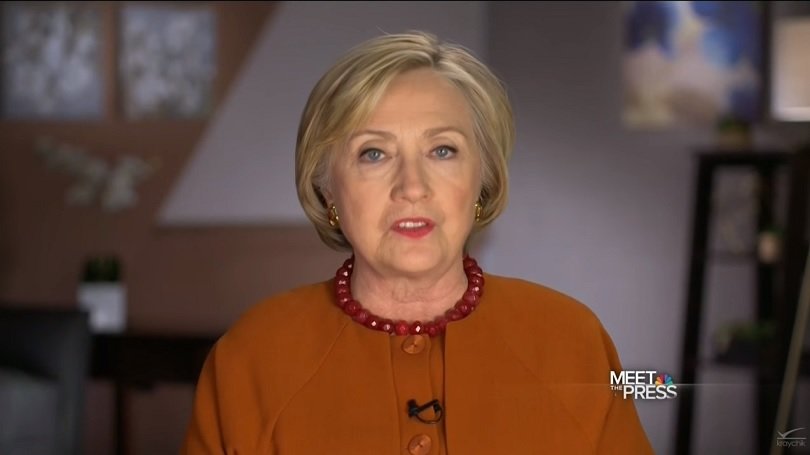 WASHINGTON, D.C., April 4, 2016 (LifeSiteNews) – On Sunday, Hillary Clinton, the frontrunner for the Democratic presidential nomination, starkly affirmed her belief that “the unborn person does not have constitutional rights.”

Yesterday morning, “Meet the Press” host Chuck Todd asked Clinton, “When, or if, does an unborn child have constitutional rights?”

She began by noting that, “under our laws currently, that is not something that exists.”

“The unborn person doesn’t have constitutional rights,” she replied.

She said, while “that doesn’t mean that we don’t do everything we possibly can…[to] help a mother who is carrying a child and wants to make sure that child will be healthy,” she opposed “sacrificing the woman’s right to make decisions.”

“That’s an important distinction, that under Roe v. Wade we’ve had enshrined under our Constitution,” she said.

“I want to maintain that constitutional protection,” she added.

The Republican National Committee said her appearance showed her to be out-of-touch with the American mainstream.

“Clinton revealed that she believes no unborn child is subject to constitutional rights,” the GOP said in a statement on Sunday. “Voters now know Clinton’s extreme stance against the value of protecting life, and can no longer be misled by her deceptive pandering.”

Bill Donohue of the Catholic League said, “Hillary's position is eerily reminiscent of what U.S. Supreme Court Justice Roger Taney said in his infamous 1857 Dred Scott ruling on slavery. He declared that blacks had 'no rights which the white man was bound to respect.'”

The pro-life amici briefs in Roe v. Wade argued that the unborn child is protected by a host of constitutional rights, including the Fourteenth Amendment's guarantee that the government not “deprive any person of life, liberty, or property, without due process of law.” The Roe decision agreed that, if the Fourteenth Amendment applied to the unborn, the case for abortion “of course, collapses, for the fetus’ right to life would then be guaranteed specifically by the Amendment.” But it dismissed these concerns, as Justice Harry Blackmun said he believed abortion had been freely available prior to the amendment's adoption, proving it was not intended to protect children inside the womb.

Clinton said yesterday, “I support the reasoning and the outcome in Roe v. Wade.”

“I think our movement should follow her lead and drop the preface 'unborn' and just use child,” said Rev. Patrick Mahoney of the Christian Defense Coalition.

“Even Hillary Clinton knows the mother is carrying a 'person' and 'child,' he said. “Now, Hillary, help us protect them!”

Clinton's rival for the Democratic nomination, Sen. Bernie Sanders of Vermont, agreed with Clinton later that morning, telling George Stephanopoulos on ABC’s “This Week” that “I do agree with the Secretary. I don’t believe there’s any constitutional protection for the unborn.”

He said, if elected, he would take on “the right-wing governors who are trying to restrict and limit that right” of abortion-on-demand.

When asked if Roe v. Wade would be a “litmus test” for Supreme Court nominees, he responded, “Of course. It's very important to me.”

By contrast, last August Republican presidential hopeful Mike Huckabee said that abortion is “a violation of that unborn child’s Fifth and Fourteenth Amendment rights for due process and equal protection under the law.”

Rev. Walter Hoye of the Issues4Life Foundation said he hoped their candor would help his fellow pastors make up their minds about the Democratic Party.

If the fact that it “intentionally scrubbed all mention of the word 'God' from the 2012 Democratic platform isn't enough for you to stop voting Democratic, then perhaps this will make it plain for you,” he said.