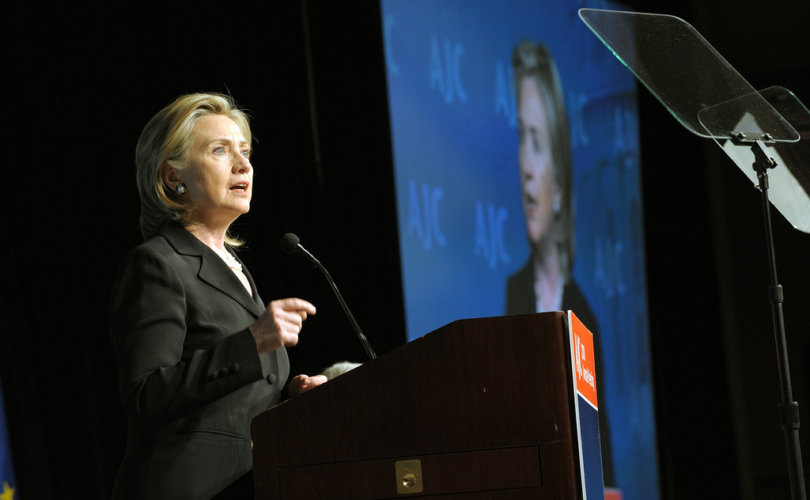 WASHINGTON, D.C., April 1, 2016 (LifeSiteNews) – The grasp Donald Trump exerts over the 2016 presidential election is so complete that one of his remarks has touched off a heated war of words among the Democratic presidential hopefuls. For two days, Hillary Clinton and Senator Bernie Sanders have bickered over which candidate supports abortion-on-demand more fervently.

The Vermont senator replied that the remarks were “shameful” and “beyond comprehension,” and said he would “do everything that I can to allow women to…have access to clinics all over this country so that if they choose to have an abortion, they will be able to do so.”

But he concluded that amplifying every stray remark the billionaire makes deprives voters of “a serious discussion about the serious issues facing America.”

During a campaign speech in New York state on Thursday, Clinton implied that Sanders was not “passionate” enough about the issue.

Sen. Sanders said that Trump's remarks “were a distraction” from the serious issues, she said. “To me, this is a serious issue and it is a very serious discussion,” she said.

She told the crowd at the State University of New York (SUNY) at Purchase, “I know Senator Sanders supports a woman's right to choose, and I also know that Planned Parenthood Action Fund and NARAL endorsed me because I led on this issue.”

“We need a president who is passionate about this,” she said, referring to expanding abortion-on-demand, “seeing it as a top priority, because women’s health is under assault.”

MSNBC clarified that Sanders never called the issue a “distraction” shortly after Clinton exploded that she was “so sick of the Sanders campaign lying about me.”

He clarified on CBS News that, while he had no intention of minimizing the importance of abortion as an issue, “I cannot spend my entire life responding to every moronic statement made by Donald Trump.”

It would be difficult to find much daylight between the two candidates. Both say they will veto any of the pending restrictions on abortion; both say they will use taxpayer funds to pay for abortion at home and abroad; and both say they will appoint Supreme Court justices who are ideologically committed to upholding Roe v. Wade and Doe v. Bolton.

The emphasis may help boost the Clinton campaign, who saw her lead New York, the state she once represented in the Senate, plunge precipitously, falling 36 points in one week.

But the tussle also exposes a fissure between competing versions of what it means to be a liberal, and whether economic collectivism will give way to social issues.

NARAL President Ilyse Hogue drew attention to this earlier this year, when she said that Sen. Sanders embodies “this sort of old model of progressivism, which is very much the white, working-class, labor-era progressivism.”

That “is being [challenged] in a really big way right now” by a left-wing philosophy more grounded in feminist and identity politics, she said. “We have really been trying to explore this link between economic equality, abortion access, and reproductive rights generally. It's been super fascinating.”

But Democrats for Life say the competition to outdo one another as the most polarizing figure on abortion is electoral poison, especially as polls consistently show that 70 percent of Americans oppose taxpayer-funded abortion-on-demand.

“The mainstream Democratic Party needs to pay attention,” the group said. “Democrats need to embrace the Whole Life philosophy that provides protection from conception to natural death, which would give millions of voters a voice – and a real choice.”