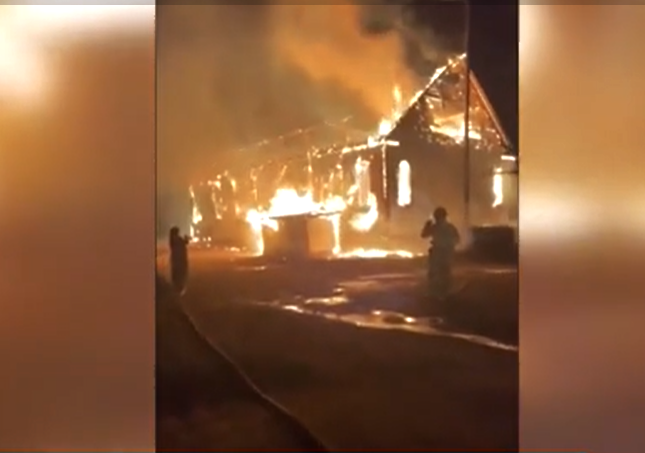 Historic Catholic church burns to the ground in Alberta.Facebook

FORT CHIPEWYAN, Alberta (LifeSiteNews) – One of the oldest standing Catholic churches in the Canadian province of Alberta was terrifyingly reduced to ashes late last week in what police are deeming a “suspicious” incident.

The destruction of yet another historic Catholic church in Canada happened last Thursday in the remote northern Alberta town of Fort Chipewyan. The fire saw the 113-year-old Catholic church of the Nativity of the Blessed Virgin reduced to nothing but its burned-out foundation. The church was built by the Oblate missionaries in 1909.

Police had been notified of the fire in the early morning hours on Thursday, and officers along with the Fort Chipewyan Fire Department as well as Alberta Forestry helped put the fire out before it spread to nearby buildings.

While officials have stated that the overall cause of the fire is not yet clear, according to the Royal Canadian Mounted Police (RCMP), the inferno is being treated as “suspicious.”

“We do believe it suspicious,” RCMP spokesperson Corporal Troy Savinkoff told the media.

“But we’re still investigating to see what the potential cause of the fire is,” he added.

RCMP have also said that there were no reported threats directed to the Nativity of the Blessed Virgin Church before the incident. There were no injuries reported and the investigation is ongoing.

Since the spring of 2021, over 100 churches, most of them Catholic, have either been burned or vandalized across Canada. The attacks on the churches came about shortly after the discovery of unmarked graves at now-closed residential schools once run by the Church in parts of Canada in the spring of last year.

Last year, the mainstream media ran with the inflammatory claims that hundreds of children were buried and disregarded by Catholic priests and nuns who ran some of the schools.

This resulted in mass church burnings across Canada.

First Nation Chief: People should not take their ‘frustration and anger and disappointment on the house of the Lord’

Allan Adam, the First Nation Chief for Athabasca Chipewyan, live-streamed the fire on his Facebook page. In the video, Adam could be seen helping firefighters put out the blaze.

A visibly disturbed Adam said with the sound of fire in the background, “Over 100 years in history, gone up in flames.”

“This was uncalled for. This was a beautiful church.”

In a statement sent to APTN News, Adam said that people should not take their “frustration and anger and disappointment on the house of the Lord.”

“A lot of history went through there, a lot of our elders’ memories are in my head will only be there now because every time I walk across there won’t be a church standing there,” Adam noted.

“ACFN Chief and Council are saddened by the loss of the Nativity of the Blessed Virgin Roman Catholic Church in Fort Chipewyan,” the statement said.

“The church, built in 1909, has been a part of the community for over one hundred years, and even though the relationship between Indigenous Peoples and the Roman Catholic Church is complicated the loss of the church will be deeply felt in the community.”

Canada’s Residential School system was a structure of boarding schools funded by the Canadian government that ran from the late 19th century until the last school closed in 1996.

Some schools were run by Catholic religious orders that had settled in Canada. While there were indeed some Catholics who committed serious abuses against native children, the past wrongs led to anti-Catholic sentiment, which exploded last summer after the discovery of the “unmarked” graves in Kamloops, British Columbia.

When it comes to the reported discovery of unmarked graves at the Kamloops Residential School, recent emerging evidence undermines the mainstream media and government narrative that the Catholic Church was secretly burying children.

In July, Pope Francis made an Apostolic “pilgrimage” to Canada, visiting exclusively first nations peoples in Alberta and Quebec. While in Quebec, he joined a pagan “smudging” ritual before he gave a lengthy speech  where he conveyed “deep shame and sorrow” for the role played by Catholic Church members in government-funded residential school abuses.

The Pope made the apology even though the fact a recent investigation from January 2022 found that despite the allegations of “physical genocide” on the part of the Church, no graves have been found.

Canadian Catholic prelates have continued to comply with media and government pressure to apologize for the church’s roles in the residential school system.

Canadian Prime Minister Justin Trudeau last year waited weeks before acknowledging the church vandalism, and when he did speak, he said it is “understandable” that churches have been burned, also saying it is “unacceptable and wrong.”  He later also demanded that Pope Francis apologize.

Also, the death records themselves from the Residential Schools after a government investigation showed that the unmarked graves where burials took place were claimed to have been accounted for and were not exclusively used for only native Canadians.