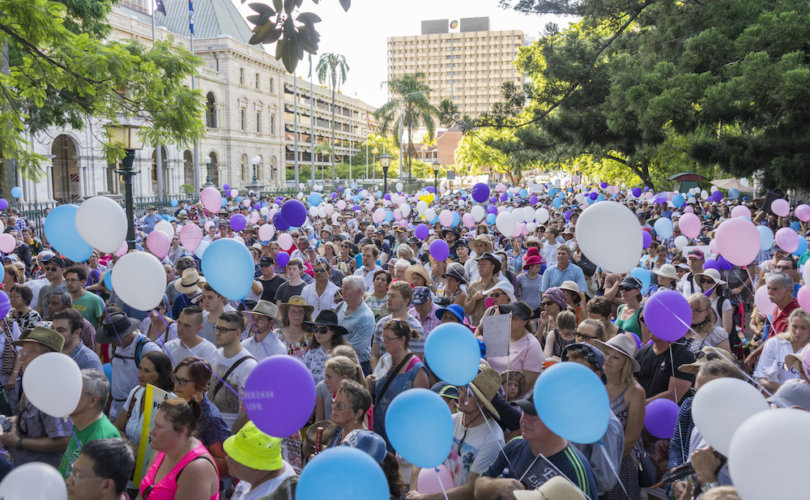 The bills were designed to remove abortion from the criminal code, install 50-metre “protected area” zones prohibiting peaceful assembly near abortion clinics, and force doctors and nursing staff to perform deemed ‘emergency abortions’ regardless of any conscientious objections.

This is the first time that a bill advancing the availability of abortion has been defeated in Australia.

The withdrawal comes at the end of a 10-month battle during which both bills went through marathon committee hearings that worked through a combined 2,720 submissions of which 83 percent were against the bills. By comparison, an inquiry into the contentious subject of domestic violence with its greater media visibility only received 20 submissions.

The outcome of these all-party parliamentary committee inquiries that replaces the function of the upper house in the Queensland Parliament was damning. Neither bill was able to be recommended to the Parliament for passing with the first Pyne bill unanimously rejected.

Official parliamentary petitions against each bill collected a combined 55,604 signatures. An unprecedented crowd estimated at 4,000 people arrived in front of Parliament at the end of the annual March For Life in Brisbane, completely filling all available space.

For peak lobbying group Cherish Life Queensland, the win was a welcome result against what was widely regarded as extreme bills.

“The bills faced certain defeat in Parliament because they were so flawed,” Cherish Life president Julie Borger said. “The announcement by the Labor government that Parliament will not consider abortion legislation again in this term of parliament is a great victory for life and decency. Mr. Pyne was used by the pro-abortion lobby, who gave him disastrous advice.”

The win also reflected the results of market research performed in May 2016 when the first bill was announced.

“Only 6 percent of Queenslanders support the extreme position of abortion at any stage of pregnancy and for any reason, which these bills would have legalised,” Borger said.

Cherish Life has also attacked the bills for their complete lack of safeguards such as mandatory counseling and cooling off periods.

“Often, there is not free and informed choice by women. There is a lot of coercion by parents, boyfriends, partners or husbands.” she said.

Queensland Liberal National Party (LNP) member Mark Robinson MP, who led the fight against the bills, was keen to point out that the withdrawal of the bills from the Parliament was a strategic move by pro-abortion MPs to prevent “a catastrophic loss that could set abortion reform back many years.”

Robinson also explained that the Labor government’s face-saving decision to refer the current abortion legislation to the Law Reform Commission was not endorsed by the Parliament. “It is purely a Labor thing,” he added.

Key to the withdrawal of the bills was the unanimous decision by LNP MPs to vote as a block against the bills in line with party policy. Party leader Tim Nicholls had originally declared a conscience vote on what was then only one bill just days after becoming party leader and without having a party room meeting to decide the issue. The allocation of the conscience vote is what enabled the Pyne Bill(s) to have viability for passing in the Parliament.

He again offered all MPs conscience votes on both bills in a party meeting Monday afternoon.  Each LNP MP came to their own conclusion that they would vote against both bills, resulting in an effective block vote that coincidentally reflected party policy on abortion.

In a statement after the meeting, Nicholls said, “The first bill left the entire area of abortion unregulated and this was clearly untenable. The second bill attempts to correct the failures of the first bill but falls well short. It creates further risk and uncertainty as shown in the Parliamentary Committee report – this doesn’t help anyone.”