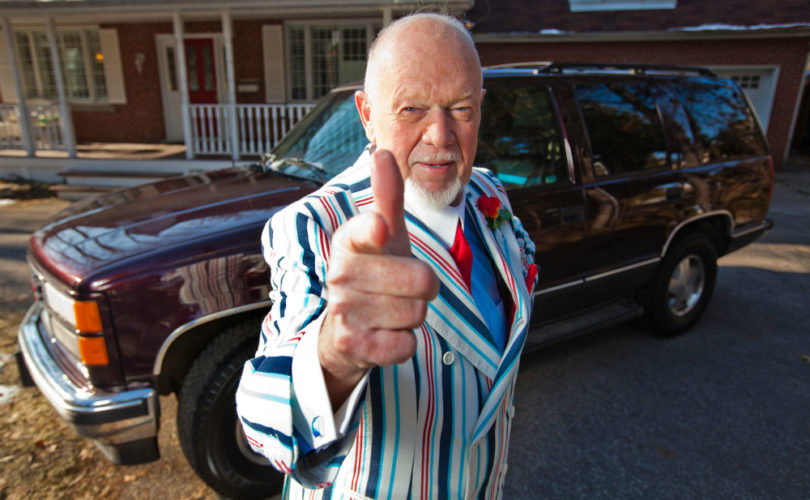 TORONTO, November 12, 2019 (LifeSiteNews) — Canadian conservative-minded hockey icon and broadcaster Don Cherry was let go by Sportsnet after making on-air comments over the weekend about people who come to Canada and partake of the country’s “milk and honey” while refusing to wear the red poppy to honor those who gave their lives to pay for this “way of life.”

A social media backlash by Canadian leftists led to the 85-year-old’s firing.

Cherry was alongside co-host Ron MacLean during the Coach’s Corner portion of Hockey Night in Canada on Saturday during a game between the Philadelphia Flyers and the Toronto Maple Leafs. Cherry alluded to the Canadian observance of Remembrance Day and the country’s gratitude for the sacrifice of its armed forces and veterans.

Commenting about the apparent lack of commemorative poppies worn by recent immigrants in Ontario, the former NHL Coach of the Year said, “I live in Mississauga, where nobody wears one,” adding, “Downtown Toronto, forget it … Nobody wears a poppy.”

Idiot Canadians are calling for this lovely gentleman to be fired for this. AND his life time friend sat nodding next to him just apologised.

He speaks nothing but the truth. Migrants should wear a poppy out of respect. #DonCherry pic.twitter.com/0zRL6IsjYm

Leftists on social media called for his dismissal from Sportsnet. On Twitter, the hashtags #DonCherryMustGo and #FireDonCherry trended during the resulting controversy.

“He’s a lifelong, unrepentant, irredeemable racist who’ll never change,” she said. “We shouldn’t bother trying. He just needs to be thrown in a dumpster.”

On Twitter, another leftist went so far as to assert that poppies themselves are a racist symbol.

Mayor Bonnie Crombie of Mississauga tweeted, “For @CoachsCornerDC to say that ‘you people’ do not respect our veterans is despicable. We’re proud of diverse cultural heritage and we‘ll always stand up for it. New immigrants enrich our country for the better. We’re all Canadians and wear our poppies proudly.”

“Don’s discriminatory comments are offensive and they do not represent our values and what we stand for as a network,” it said in a statement. It went on to say, “We have spoken with Don about the severity of this issue and we sincerely apologize for these divisive remarks.”

The National Hockey League said in a statement that while it recognizes Cherry's service as a broadcaster spans four decades, Sportsnet's decision was “a justifiable response to his comments on Saturday night.”

The Royal Canadian Legion stated that while it appreciates his “passionate support for veterans,” it was determined that his remarks were “hurtful.”

“I have worked with Don for 30 years, and we both love hockey. But last night, I know we failed you. I see hockey as part of what unites us. I have the honour of travelling across our country to celebrate Canada’s game, and our diversity is one of our country’s greatest strengths,” MacLean said.

In his subsequent apology, MacLean sought to explain his silence when Cherry made his controversial statement.

“I did not catch it, I did not respond,” MacLean said.

MacLean gave Cherry a thumb’s up when the remarks were made. Cherry said afterward that he was “disappointed” by MacLean’s apology.

Esteemed hockey announcer fired for telling immigrants to buy a poppy to honor fallen Canadian soldiers. Don Cherry set off a nerve by observing what many of us, particularly recent immigrants, know: gratitude to veterans of host country is low. https://t.co/Cy4OkhtF0i

Cherry refuswa to apologize, according to the Toronto Sun, saying, “I have had my say.”

On Monday night, Cherry told a Toronto radio station that he was saddened by Sportnet’s decision but remained defiant.

“I could’ve stayed on if I wanted to and knuckled under, and turned into a simp, but that’s not my style,” Cherry told Newstalk 1010. “I’m unemployed now after 38 years. It’s kind of strange to be unemployed halfway through the season. And of all days Remembrance Day. It’s sad.”

Cherry has long been a supporter of Canada’s armed forces and veterans, and even visited troops in the field in Afghanistan.

On Twitter, the #DonCherryIsRight hashtag was trending in Ontario and petitions were set up to support the veteran broadcaster. As of noon Tuesday, more than 83,000 signatures appeared at Change.org demanding Cherry’s reinstatement.

On Newstalk 1010, Cherry elaborated and said he was not singling out specific minority communities. During his original remarks, he mentioned Mississauga and Toronto, two cities in Ontario that have received large numbers of immigrants and now have visible minority populations of around 50 percent.

Elsewhere in the small towns of Ontario, the numbers of visible minority people are far lower.

“I did not say minorities, I did not say immigrants,” Cherry said. “If you watch Coach's Corner, I did not say that. I said 'everybody.' And I said 'you people,’” he told The Canadian Press. On Newstalk 1010, he said he was referring to “everyone.”

I think this weeks episode will just be me starring into the abyss, just like Ron Maclean sitting next to Don Cherry. pic.twitter.com/61Hq251m5O