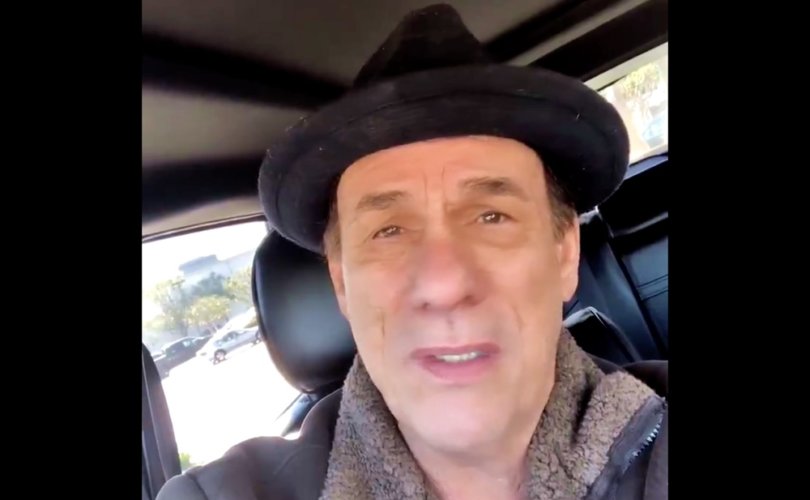 January 28, 2019 (LifeSiteNews) – Entertainment icon Robert Davi is no stranger to dissenting from Hollywood’s political orthodoxy, most recently speaking out against a newly-enacted New York law enshrining a “fundamental right” to virtually-unlimited abortion in the state.

Last week, New York’s state Senate voted 38-24 and the state Assembly 92-47 in favor of the so-called “Reproductive Health Act.” Democrat Gov. Andrew Cuomo signed the bill, calling it a “historic victory for New Yorkers and our progressive values” and ordering the One World Trade Center spire to be lit in pink to mark the occasion – the same building where a memorial recognizes eleven preborn children killed in the September 11 terror attacks.

The new law declares that “Every individual who becomes pregnant has the fundamental right to choose to carry the pregnancy to term, to give birth to a child, or to have an abortion,” erases the state’s recognition of preborn babies older than 24 weeks as potential homicide victims, removes abortion from the penal code entirely, and allows licensed health practitioners other than full doctors to commit abortions.

The New York State Right to Life Committee warns that by declaring abortion a “fundamental right,” it opens the door to invalidating “any limits on abortion” and “mandat[ing] that everyone take part in the culture of death”; prevents pregnant women whose babies are killed in violent attacks from seeing justice; and have the effect of “authorizing infanticide” by repealing the requirement that a second physician be on hand in the event that an attempted abortion past twenty weeks yields a live infant.

Pro-life leaders, commentators, and private citizens across the country have spoken out against the radical new law, including Davi, a Catholic, in a video message the actor shared via Twitter:​​

I weep for all women pic.twitter.com/XLtfv6qTki

“My dear brothers and sisters, I don’t even know how to begin this. But I cannot tell you how disturbed I am to hear that in New York state they passed a bill whereby you can abort babies up to nine months,” Davi said. “I’m astounded. I don’t understand what’s happening to this country.”

He wondered how Cuomo, who he noted “comes from Italian-American roots,” could “let this happen and celebrate it and cheer for it and say no pro-lifers are allowed in New York,” referencing infamous comments Cuomo made in 2014. Davi also wondered if “women out there really want this.”

“You really think you can rip a baby from the womb at nine months and it’s okay?” he asked. “When there’s so many people that want adoptions? Do you not think this is savage? King Herod and the pharaohs killed the firstborn, remember that?

The Democrat rising star ran for office on a platform declaring “reproductive freedom” was “essential” and opposing “any federal, state or local rollbacks, cuts or restrictions on” abortion.

“Do you understand the ramifications of this, what’s happening to our civilization? Are there no more morals, is there no respect for human life? No sense of law and order?” Davi asked. “The Democratic Party has become a party of chaos, in the guise of helping everyone. This whole…it’s just, it’s a sad, sad time.

Many Catholic observers are calling on church leaders in the state to deny Holy Communion to Cuomo and other pro-abortion lawmakers who claim to follow the life-affirming church. LifeSiteNews’ petition condemning New York’s celebration of the radical new law has collected more than 115,000 signatures.

Davi is an actor, director, and jazz singer best known for his roles in License to Kill, The Goonies, and Die Hard. He’s also an outspoken Hollywood conservative, and will be appearing in Nick Loeb’s upcoming film about Roe v. Wade, which promises the “untold story of how people lied, how the media lied, and how the courts were manipulated to pass a law that has since killed over 60 Million Americans.”