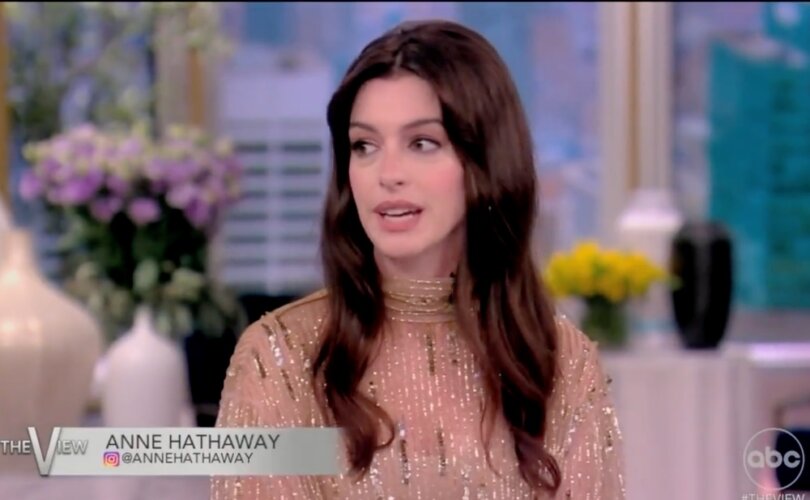 (LifeSiteNews) — Hollywood actress Anne Hathaway drew sharp criticism on Tuesday for claiming that the legalized killing of a preborn baby can be synonymous with “mercy.”

The Devil Wears Prada and Princess Diaries star made the remarks during a November 1 interview on ABC’s “The View,” claiming that her “personal experience with abortion” caused her to believe that “abortion can be another word for mercy.”

Hathaway’s comments were in response to prompting by co-host Joy Behar, who asked her to expound on a July Instagram post in which Hathaway decried the U.S. Supreme Court’s landmark decision in Dobbs v. Jackson Women’s Health Organization to overrule Roe v. Wade (1973) and Planned Parenthood v. Casey (1992), which had established a federal “right to abortion.”

In her social media post on the 16th-year anniversary of the release of The Devil Wears Prada, in which she co-starred with Meryl Streep, Hathaway said she was “struck by the fact that the young female characters in this movie built their lives and careers in a country that honored their right to have choice over their own reproductive health,” and added, “See you in the fight xx.”

“We’re in the fight every minute. And you mentioned ‘The Devil Wears Prada’ turning sweet 16. Some 16-year-old’s life has been irrevocably changed because of the overturning of Roe v. Wade,” Hathaway continued, going on to argue that for a young career woman “your reproductive destiny matters a great deal.”

Asserting that her remarks didn’t amount to “a moral conversation about abortion,” the 39-year-old actress and mother of two framed her perspective opposing the rollback of Roe as “a practical conversation about women’s rights and, by the way, human rights because women’s rights are human rights and the freedom we all need to be able to choose and build our lives and have access to excellent health care.”

Continuing, Hathaway said that “without going into too many details, my own personal experience with abortion, abortion can be another word for mercy.”

Anne Hathaway: “Abortion can be another word for mercy.” pic.twitter.com/PSi4rYSo35

It’s unclear how having a legally protected “choice” to kill one’s own preborn baby would be necessary “in order to be human.”

Hathaway received widespread backlash for her comments from conservatives and pro-life personalities on Twitter.

“Anne Hathaway said today that abortion is ‘another word for mercy.’ No, dismembering the body parts of a child is not merciful,” wrote Planned Parenthood director turned prominent pro-life advocate Abby Johnson.

“At what point in the procedure does Anne Hathaway think that there is any ‘mercy’ in abortion?” asked Kristan Hawkins, president of Students for Life of America. “Before or after an innocent child is dismembered?”

Podcast host Liz Wheeler took aim at Hathaway’s comments regarding the ability of career women to be successful without access to abortion, which she characterized as “a HORRIBLE thing to tell young women.”

“What will God say to Anne Hathaway on Judgment Day when she proposes the idea that killing babies in the womb is mercy?” Wheeler asked.

What will God say to Anne Hathaway on Judgment Day when she proposes the idea that killing babies in the womb is mercy?

Also, what a HORRIBLE thing to tell young women, that in order to succeed in your career, you have to kill your children. That’s FALSEpic.twitter.com/fbYzz2zqgf

Rachel Campos-Duffy, a FOX & Friends co-host and mother of nine, including a daughter with Down syndrome, pointed out that “80% of babies diagnosed w/ Down Syndrome are aborted,” a number that rises to 100% in Iceland.

“Is this ‘mercy’ or profiling (of the deadliest kind)?” Campos-Duffy said, adding that her daughter Valentine is “not a defect. She’s a human being as worthy of life & love as you are #AnneHathaway.”

“There’s something truly Hunger Games-esq about a glitzily dressed movie star advocating for mercy-killing unborn babies as the ladies of The View beam and applaud,” she wrote.

Abortion advocacy isn’t a new posture for Hathaway. In 2019, she decried Alabama’s pro-life law banning most abortions, which she said was enacted with the “complicity of white women” and would “lead to the unnecessary and avoidable deaths of women, a disproportionate number of whom will be poor and/or black.”

Hathaway did not address the fact that no pro-life law requires a woman to become pregnant, and 100% of successful abortions result in the deaths of preborn babies, a disproportionate number of whom are black.