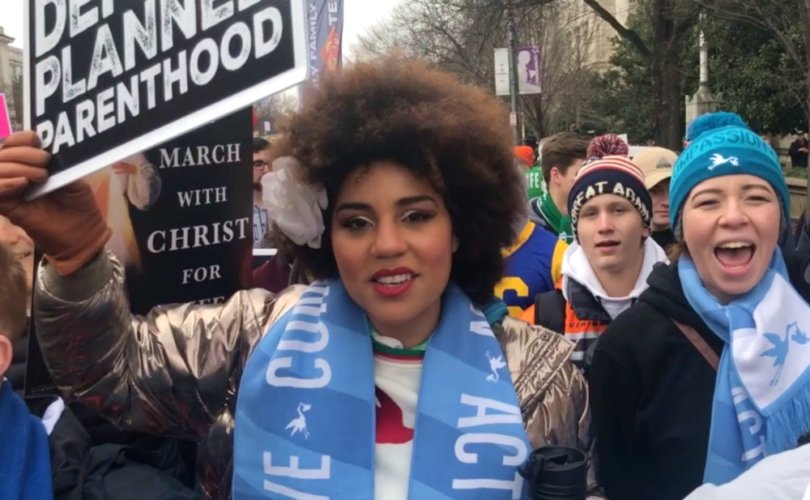 “I support our president. I support what he’s doing. He’s pro-life,” said Villa as she marched earlier this month at the annual March for Life that took place in Washington D.C.

“I got to see Vice-President Pence speak last night and hear him talk about how this administration’s going to be even more pro-life and stand up for life, defund Planned Parenthood. These are things that are important to me, [that] I’ve been waiting for. Many Republicans have said they’re going to do it. I feel like this President is actually going to do it,” she added.

This was Villa’s first time marching in the Jan. 18 Washington D.C. March for Life. The theme of this year’s march was “Unique from Day One,” to emphasize the settled biological fact that the pre-born are living, complete, and distinct human beings starting at fertilization.

In a surprise appearance, President Donald Trump addressed pro-life advocates at the event, telling them that “every life is worth protecting” and that he will veto any legislation that crosses his desk that “weakens the protection of human life.”

Villa said she wants to see the “end of abortion.”

“Planned Parenthood is there solely because they provide abortion. Yes, they provide other clinic services, but there are plenty of clinics around the United States…who provide care for pregnant women,” she said.

“Women’s healthcare is of utmost importance, but it shouldn't be synonymous with abortion. That’s a ridiculous thing. So, I think we need to defund Planned Parenthood,” she added.

She said she was marching at the event because “life matters.”

“We’re marching here because we support life, from the womb to the tomb. Life is never wrong,” she said.