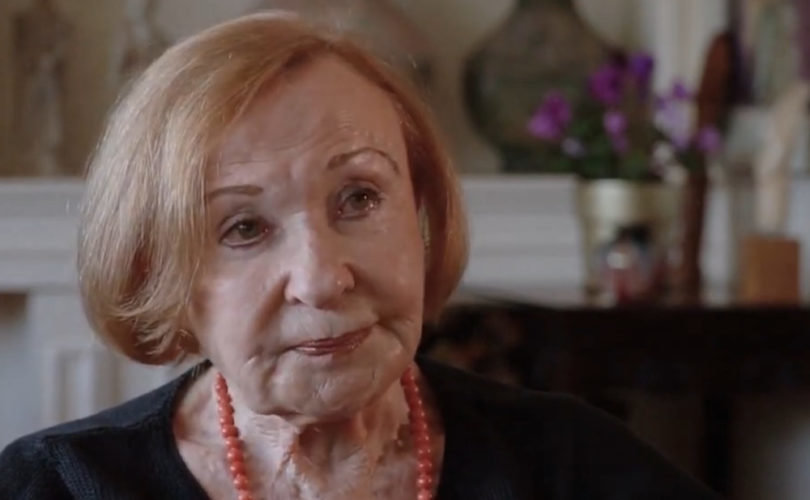 June 17, 2021 (LifeSiteNews) — A survivor of the Holocaust has denounced “Eugenics-driven” public health policies during the COVID-19 crisis that she said could lead to “fascist dictatorship and genocide.”

In an interview earlier this year with German attorney Dr. Reiner Fuellmich, Vera Sharav, a long-time medical activist, drew on her experience under the Nazi regime as she warned about “unprecedented oppressive and repressive elements” instituted in the coronavirus era.

She told Fuellmich that “as a child survivor of the Nazi reign of terror I learned indelible lessons about the nature of evil. I know the consequences of being stigmatized and demonized as a spreader of disease.” Born in Romania during the Second World War, Sharav was held in a Ukrainian detention center as a child and ultimately lost her father in the Holocaust.

“We were required, as Germans know, to wear a yellow Star of David to identify us, to segregate Jews,” she said. “Exclusionary laws barred the family from normal life, from attending ordinary activities. Our property was impounded, we were forbidden to participate in all educational, religious, cultural gatherings. Travel was forbidden for Jews, so there was no escape.”

“These painful memories from my childhood sensitized me to the threat posed by current restrictive government dictates.”

Sharav blasted today’s “medical mandates” as “a major step backward toward a fascist dictatorship and genocide.” “What they are doing with this virus is to institute absolutely unprecedented oppressive and repressive elements that imprison us in our homes,” she said.

“Mandatory masks are an insidious psychological weapon. They demean our dignity as free human beings,” she added. “They do not work in this or any epidemic and they are the symbolic equivalent of the yellow star.” Lockdowns likewise have “this time around proved to be [a] very effective tool for social control but they failed to change the course of the virus.”

The Holocaust survivor condemned the state of the medical establishment, drawing comparisons between contemporary medical policies and those employed by the Nazis. “Today, debate is forbidden. A doctor is not allowed to say that the virus is being exploited to maintain a state of fear.” “Doctors and scientists who express views that challenge official dictates are treated as heretics. They are threatened with loss of livelihood,” and “muzzled and vilified by the media” for speaking out about the safety of COVID-19 vaccines, she said.

“Fear and propaganda were the psychological weapons the Nazis used to impose a genocidal regime, and today some are beginning to understand why the German people didn’t rise up: fear kept them from doing the right thing,” Sharav said.

“What sets the Holocaust apart from all other mass genocides is the pivotal role played by the medical establishment,” she noted. “Every step of the murderous process was endorsed by the academic and professional medical establishment. Medical doctors and prestigious medical societies and institutions lent the veneer of legitimacy to infanticide, mass murder of civilians.”

She referred to Aktion T4, a Nazi murder campaign against tens of thousands of primarily disabled victims. “The first victims were disabled German infants and children under three,” Sharav said. “They were identified by midwives who reported their existence to the state. The next victims were the mentally ill followed by the elderly in nursing homes.”

Eight decades later, the COVID-19 crisis has exposed a stunning revival of “eugenics-driven public health policies in Western Europe and the United States,” Sharav said, calling “government directives to hospitals and nursing homes” that “condemned the elderly to death” “a chilling replay of T4.”

“In Europe and the United States, hospitals were ordered not to treat, not to provide medical treatment, including oxygen, to elderly people in nursing homes. Several U.S. governors sent infected elderly people to nursing homes, knowing that they lacked essential safeguards to prevent the spread of the virus,” she said. Sharav cited the case of Gov. Andrew Cuomo of New York, who issued executive orders credited with leading to thousands of avoidable nursing home deaths despite having recognized the risks for elderly patients. Reports have shed light on similarly deadly actions by other Democrat governors, such as Michigan’s Gretchen Whitmer.

The new threat of eugenics-based policies goes even “beyond Hitler,” Sharav warned. She compared the Great Reset, a program sponsored by the World Economic Forum and top multinational corporations, with Hitler’s “master plan.” Hitler, however, “only looked at Europe and taking over Russia, but still, he didn’t think global,” Sharav said. “This is global.”

“We’re being tracked, surveyed,” Sharav told Fuellmich, pointing to the rise of vaccine credential systems, like “green passports,” which she said create “an apartheid two-class society,” with “one class privileged, the other reviled and discriminated against.”

“Sound familiar? Will ghettos, detention camps follow? And how will people be killed?” she asked. “Once you start having these two-class systems you will not prevent a global holocaust.”

“Government should not be interfering in our personal lives, in our medical choices. What is that? Where did that come from? It started with the Nazis,” Sharav said. “I never thought that I would be alive to be again afraid of the same elements.”