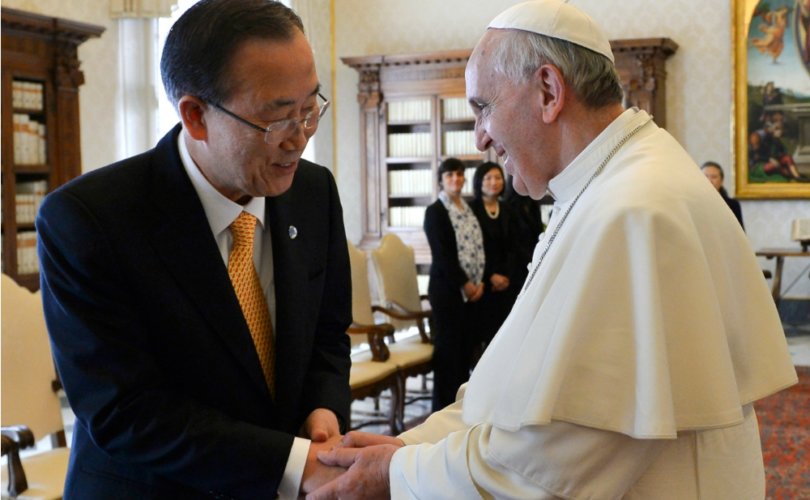 NEW YORK, July 23, 2015 (LifeSiteNews) – The Holy See is emphasizing its commitment to promoting life and family at the United Nations after a confusing statement the nunciature made in a negotiation on the sustainable development goals (SDGs) last month.

In a speech on June 22, Monsignor Joseph Grech, representing Archbishop Bernardito Auza, said the Vatican supports the goals and targets of the SDGs “verbatim.”

Pro-life advocates were alarmed at this because two of the targets call for “universal access” to “sexual and reproductive health and reproductive rights” as well as “family planning” services, phrases that are typically used at the UN to include abortion and contraception.

The concern is compounded by what has seemed to be an unprecedented openness from the Vatican to the United Nations under Pope Francis, and a more muted criticism of the UN’s anti-life and anti-family agenda.

However, Msgr. Joseph Grech told LifeSiteNews that the Holy See had already raised its objections to the use of the problematic language when the SDGs were adopted by the General Assembly in 2014. He noted that the Holy See pointed to those objections again in the June 22 statement.

Veteran pro-life UN lobbyist Patrick Buckley, who was present for the “post-2015 development agenda” negotiations at the end of June when Grech read his statement, told LifeSiteNews there was “no scope for the Holy See to make any changes to the SDGs” because the UN body had already decided that the proposal agreed on last year would not be reopened.

Bearing in mind that the Holy See had already communicated its reservations on the text, he said it was nevertheless unfortunate that their statement gave such a “warm welcome” to the SDGs.

Since the conclusion of the June 2012 UN Conference on Sustainable Development (Rio+20), the UN has been developing goals and targets for “sustainable development.” In January 2013, the UN General Assembly established an “Open Working Group” (OWG) to draft a proposal, and in July 2014, the OWG presented its report with a proposed 17 goals for “sustainable development.” In December 2014 the UN General Assembly adopted that proposal as the basis for developing its “post-2015 development agenda.” It is expected to be approved at the UN Summit in New York in September.

Two of the 17 goals are of particular concern to pro-life advocates: Goal 3, on ensuring “healthy lives”; and Goal 5, on achieving “gender equality.” The concern stems from the following two targets related to these goals:

According to the 1994 Cairo conference’s Programme of Action “sexual and reproductive health and reproductive rights” means providing women with “modern contraception” for “family planning” and with “safe abortion” where it is legal.

The Holy See presented its objections to the SDGs in October, registering its reservations along with other member states. These reservations were published in an addendum to the Open Working Group proposal, released in October 2014.

The Holy See’s statement said, “My delegation would be remiss in its duty … if it did not indicate several critical areas where it strongly disagrees with the text. My delegation’s participation in the consensus can be only partial because of several points in the document which are incompatible with what my delegation deems integral to development.”

The statement points to the objections the Holy See raised at the Cairo and Beijing conferences on the use of phrases like “sexual and reproductive health,” “reproductive rights,” and “family planning,” and notes the fact that the Cairo conference “rejects recourse to abortion for family planning and denies that it creates any new rights in this regard.”

The Holy See also raised concern about targets related to sex education, highlighting parents’ primary responsibility in the upbringing of their children, and insisted that the Vatican takes the word “gender” only to mean “male and female.”

…but nevertheless gives them a warm welcome?

After the General Assembly adopted the SDGs last year, the UN used them to produce a “zero draft” for its “post-2015 development agenda,” which is undergoing negotiations among member states in preparation for the upcoming New York UN Summit in September 2015, and will be used as the basis for the final document. The Holy See statement on June 22 came during one of these negotiations.

The statement said, in part:

We support the verbatim inclusion of the sustainable development goals and targets as in the Report of the [Open Working Group].

We would oppose the imposition of targets and indicators on countries and peoples whose laws and values are contrary to them. With this in mind, we would need to address how reservations of delegations contained within the Report of the [Open Working Group] will be reflected in the Outcome document.

We would strongly encourage the use and coordination of all sources of financing to achieve the SDGs and development in general.

Buckley, a veteran UN watcher, noted that pro-life advocates at the United Nations, including the Holy See, have been fighting for years to keep “reproductive health” language out of UN documents.

With that history in mind, he expressed surprise that the Holy See statement indicated “verbatim” support for the SDGs.

Buckley explained that even in his current statement, the nuncio was essentially calling on the UN not to use the SDGs to impose abortion and other objectionable practices on countries that oppose them, and urging them not to leave member states’ reservations completely out of the final document, which some countries are attempting to do. “Clearly there are issues that they don’t accept” in the zero draft, Buckley said.

However, he added, “I’ve never before seen the Holy See declare verbatim acceptance of something this important, particularly when their previously stated reservations were not included in the Zero Draft document. There was no scope to change what was in the SDGs but acceptance of that fact could have been expressed in a less positive manner.”

Stefano Gennarini, director of the Center for Legal Studies at the Center for Family and Human Rights (C-FAM), told LifeSiteNews it is no mistake that the Holy See’s reservations have been excluded from the “zero draft.” He said there is an “ongoing diplomatic battle” to exclude the reservations that countries, including the Holy See, have made to the SDGs adopted last year.

“The Nordics, Europeans and Americans that don't want the reservations clearly don't want the possibility that any state may claim that ‘sexual and reproductive health’ does not include abortion,” he said. “They are currently having the upper hand and don't even want a footnote to indicate that not everyone sees eye-to-eye on ‘sexual and reproductive health.’”

“Though the agreement is only political and not a legally binding one, this is just another example of the coercion that pro-abortion wealthy countries employ at the UN. They don't even want delegates, such as the Holy See, to be able to voice their concern for 50 million unborn victims of abortion every year,” he said.

If the Holy See’s reservations continue to be excluded from the “post-2015 development agenda” then the “Holy See will find itself in a very awkward position of being asked to support an agreement that includes abortion without reservations to qualify the term ‘sexual and reproductive health,’” he said.

Criticism of the Holy See’s strong statement of support for the SDGs does not come out of a vacuum, but amid growing concern among many faithful Catholics about the Vatican’s seemingly increased openness to the United Nations under Pope Francis.

Some Vatican organs and officials have been heavily endorsing the SDGs, and not always making clear their reservations with the document under discussion.

Of particular note was a conference on sustainable development held by the Pontifical Academy for Social Sciences (PASS) on April 28 before the environment encyclical’s release, where they hosted addresses by UN Secretary General Ban Ki Moon and UN special adviser Jeffrey Sachs. Both advocate legal abortion and population control.

Following the conference, both the chancellor of the PASS, Bishop Marcelo Sánchez Sorondo, and the president, Prof. Margaret Archer, joined Sachs in signing a statement endorsing the creation of the SDGs, despite the current pro-abortion provisions.

The Pontifical Academy for Sciences will host Sachs for another conference promoting the SDGs from November 13-15, this time focusing on promoting them to children.

The Vatican’s cooperation with Sachs is all the more concerning for many pro-life advocates because Sachs himself has said “reproductive health,” in which he would include access to abortion and the promotion of contraception, is central to achieving the UN’s development goals.

In 2002, he said, “Reproductive health services are not just desirable in and of themselves – which they certainly are – but are absolutely critical tools for alleviating poverty, and in particular for achieving the Millennium Development Goals, which are the overarching international framework for trying to alleviate the suffering of the poorest people in the world.”

Moreover, the appearance that the Holy See was endorsing the SDGs at the UN without reservation was heightened by recent comments Bishop Sorondo made that appeared to endorse the SDGs’ objectionable language.

In a statement published by C-FAM on June 2, Sorondo said the terms “sexual and reproductive health” and “family planning” in the SDGs can align with Catholic teaching.

“The draft SDGs don’t even mention abortion or population control. They speak of access to family planning and sexual and reproductive health and reproductive rights,” he said. “The interpretation and application of these depends on governments. Some may even interpret it as Paul VI, in terms of responsible paternity and maternity.”

Sorondo clarified his remarks in a statement published by First Things on June 25, insisting that he and the pontifical academies uphold the Holy See’s stance, while he continued to affirm that the UN’s use of phrases like “reproductive health” and “family planning” can square with Church teaching.

‘Unconscionable’ to support SDGs as written

Steven Mosher, president of the Population Research Institute, took issue with high-ranking Vatican officials thinking they can interpret “sexual and reproductive health” in a way that squares with Catholic morality, which condemns abortion as murder and contraception as a grave violation of the sacrament of marriage.

He told LifeSiteNews that there is no question that “sexual and reproductive health and reproductive rights” as spelled out in target 5.6 means access to contraception and abortion, especially when the document states that the phrase must be interpreted in reference to the 1994 International Conference on Population and Development (ICDP).

“For anyone in the Catholic Church to suggest the adoption of the SDGs in light of their inclusion of ‘sexual and reproductive health’ is thus unconscionable,” he said.

Mosher, who has worked on the ground in third world countries that push oppressive contraceptive and abortion agendas, said that while it is “certainly clear that a Catholic may use the term ‘reproductive health’ to exclude abortion, this is not the current understanding or usage of the term.”

“This is why we have fought battle after battle at the UN and other international forums to specifically exclude abortion, sterilization, and contraception. To continue to promote ‘reproductive health’ without first removing from the term its legal implication for the promotion of abortion and contraception is to be complicit with its present meaning and everything that follows,” he told LifeSiteNews.