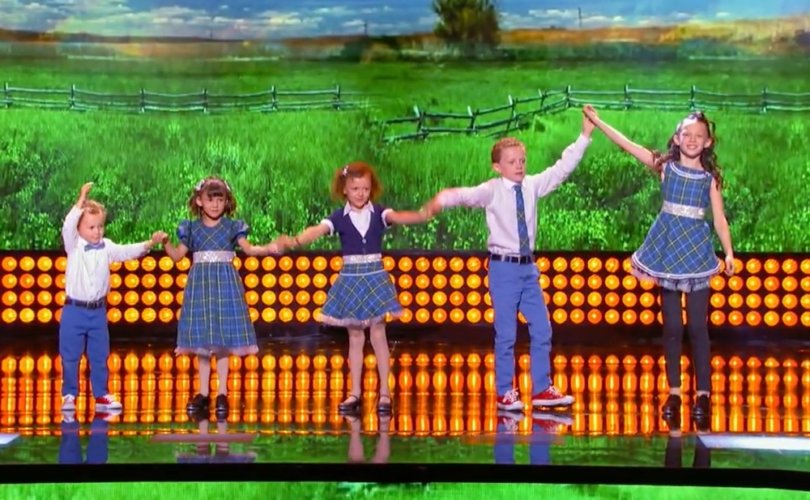 NEW YORK, May 2, 2017 (LifeSiteNews) — A Canadian family of Celtic fiddlers and tap dancers brought the audience at NBC Studios to its feet as it clapped along and cheered to an explosive St. Patrick’s Day performance last month. The TV appearance of the MacMaster-Leahy kids aired last week and was posted to YouTube.

The “MacMaster Leahy Kids” are usually the four oldest of six children belonging to married fiddle stars Natalie MacMaster and Donnell Leahy. But the climax of the group’s recent NBC appearance came when number five, three-year-old Alec, ran onstage for the final number.

The MacMaster-Leahy family says they live the life “of a typical Canadian farming family” near Lakefield, Ontario. That is until they load up into a sleek, big bus for their tours that take them across Eastern Canada and into the United States.

The MacMaster-Leahy kids have been taught by their parents how to be master performers. Natalie and Donnell were both award-winning fiddlers when they married in 2002. Each of the kids knows how to tap dance and how to scrape a foot-tapping tune on the fiddle.

Their megawatt smiles just seem to light up the stage.

In their NBC gig, the kids individually showcased their talent starting with the eldest, Mary Frances. When Alec ran on for the final seconds and danced along while holding hands with Julia, the audience along with show host Steve Garvey clearly loved it.

The family takes its Catholic faith seriously. MacMaster told the Globe and Mail after performing at the 2002 Catholic World Youth Day in Toronto, that she loves her Catholic faith, and supports all of the Church's teachings.

“Human beings make up the Church, and human beings are fallible,” she said at that time. “But the Church and her teachings, I believe, are perfect and are right, and that's the important thing.”