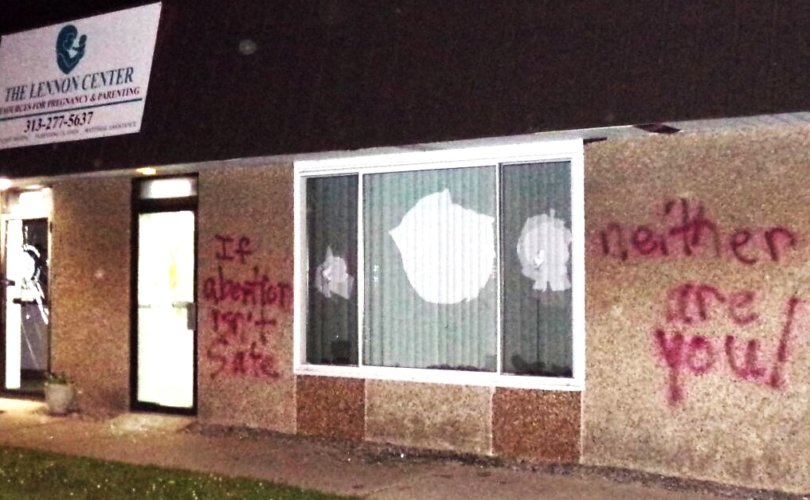 WASHINGTON, D.C. (LifeSiteNews) – An intelligence brief released by the Department of Homeland Security on Friday predicts that terrorist attacks could continue “for weeks” after the Supreme Court’s overturn of Roe v. Wade.

“Some domestic violent extremists (DVEs) will likely exploit the recent decision to overturn Roe v. Wade to intensify violence against a wide range of targets,” the brief states. “We expect violence could occur for weeks following the release, particularly as DVEs may be mobilized to respond to changes in state laws and ballot measures on abortion stemming from the decision. We base this assessment on an observed increase in violent incidents across the United States following the unauthorized disclosure in May of a draft majority opinion on the case.”

According to Homeland Security, federal and state officials are most at risk of attack, including judges. The brief also discusses domestic terrorism conducted by the radical pro-abortion group Jane’s Revenge, which has taken responsibility for multiple attacks on pro-life pregnancy centers and Catholic churches in the weeks preceding Friday’s ruling.

“In late May, a network of loosely affiliated suspected violent extremists, known as ‘Jane’s Revenge’ – which has been linked to arson attacks against the buildings of ideological opponents – shared a post online encouraging a ‘night of rage’ following (the) announcement, stating, ‘we need the state to feel our full wrath,’ and ‘we need them to be afraid of us,’” the brief states.

Jane’s Revenge published a letter on June 14 that declared “open season” on pro-lifers after giving a 30-day period for pro-life groups to disband. “We promised to take increasingly drastic measures against oppressive infrastructures. Rest assured that we will, and those measures may not come in the form of something so easily cleaned up as fire and graffiti,” the extremist group threatened.

“From here forward, any anti-choice group who closes their doors, and stops operating will no longer be a target. But until you do, it’s open season, and we know where your operations are. The infrastructure of the enslavers will not survive,” the letter continued. According to the Homeland Security brief, terrorist attacks could also target “ideological opponents” and “first amendment protected events,” such as protests and religious services.

“Both reproductive and family advocacy healthcare facilities likely will continue to remain primary targets for criminal incidents, and violence could escalate against these facilities or personnel,” the brief continued. “Faith-based organizations across the United States continue to report numerous criminal incidents against religious institutions connected to abortion rights. We are aware of at least 11 incidents of vandalism threatening violence targeting religious facilities perceived as being opposed to abortion, and one threat to ‘bomb’ and ‘burn’ a church in New York. These incidents of vandalism against faith-based organizations could indicate future targets of DVE attacks.”

Speaking to Axios, a spokesman from the Homeland Security (DHS) stated that “Americans’ freedom of speech and right to peacefully protest are fundamental constitutional rights. Those rights do not extend to violence and other illegal activity.” “DHS will continue working with our partners across every level of government to share timely information and to support law enforcement to keep our country safe,” the spokesman continued.

Last week, the Diocese of Stockton, California released a memo to clergy that warned of attacks based on a Homeland Security memo. The memo warned of imminent danger to Catholic churches and pregnancy centers in the wake of the ruling. The same memo was sent to the Archdiocese of Washington. The Homeland Security memo warned clergy of “large groups with cells nationwide have already been discovered casing parishes.”

A Stockton priest confirmed for me the authenticity of this communication, which has been floating around social media today.

Parishes – and not just in Stockton -are making plans for the possibility of “extreme violence” in the event that Roe is overturned. pic.twitter.com/S3Th4nD8zK

The Diocese of Stockton in its memo advised clergy to “make sure you have ushers and or security available during your services and perhaps identify who among your volunteers and parishioners are law enforcement” and to watch for suspicious activity, noting that “suspicious activity would include someone asking out of place questions (Largest Mass times? Doors always open? Do you have security?), looking around church property, protesters, and general disturbances.”

Earlier this month, Homeland Security warned American bishops of potential danger directed to church property and clergy after the Dobbs ruling. Homeland Security had previously warned that pro-abortion violence could ensue after the decision in reaction to calls for protesters to “storm the Supreme Court building” and to “murder the Justices.”

Protesters in Phoenix attempted to storm the Arizona State House after the overturn of Roe, with shouts of “My body, my choice.” The protests forced the Arizona senate to adjourn for safety concerns. A man was arrested earlier this month for attempting to kill Justice Brett Kavanaugh for his potential role in Roe’s overturn. He has been indicted and awaits trial.

Several Republican lawmakers have called for Jane’s Revenge to be labeled a terrorist organization in a letter addressed to Attorney General Merrick Garland. On Tuesday, 19 state Attorneys General sent a similar letter to Garland, asking him to address the growing terrorism perpetrated against pro-life groups by Jane’s Revenge.