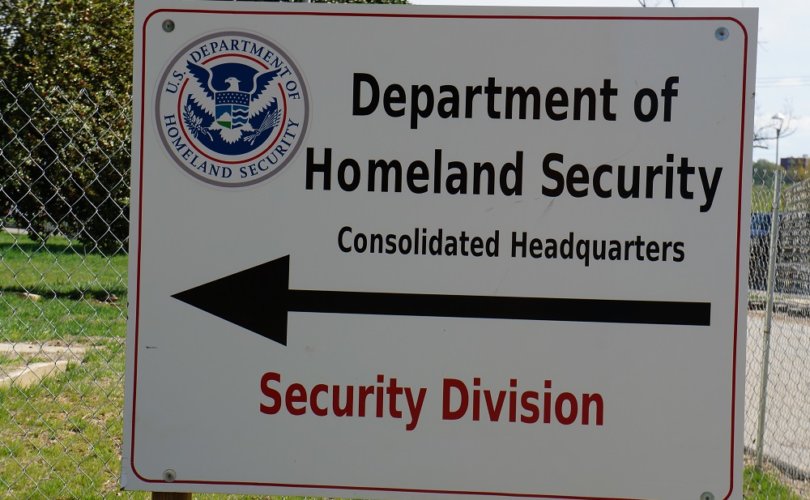 WASHINGTON, D.C., January 27, 2021 (LifeSiteNews) —– The Department of Homeland Security (DHS) issued a National Terrorism Advisory System (NTAS) bulletin, advising that “some ideologically-motivated violent extremists with objections to the exercise of governmental authority and the presidential transition, as well as other perceived grievances fueled by false narratives, could continue to mobilize to incite or commit violence.” The increased threat level takes effect today and expires on April 30.

The “bulletin” notification, the first and lowest level of terror advisories, “[d]escribes current developments or general trends regarding threats of terrorism.”

The chief threat identified by the DHS is of “Domestic Violent Extremists (DVEs),” who seek to suppress “First Amendment–protected, non-violent protest activity.” According to the statement, and in a clear attempt to smear conservatives, DVEs are said to be “motivated by a range of issues, including anger over COVID-19 restrictions, the 2020 election results, and police use of force.” The DHS claims that such individuals are responsible for “attacks against government facilities.”

Concerned with “[l]ong-standing racial and ethnic tension — including opposition to immigration,” the DHS warns that “these same drivers to violence will remain through early 2021 and some DVEs may be emboldened by the January 6, 2021 breach of the U.S. Capitol Building in Washington, D.C. to target elected officials and government facilities.”

As well as DVEs, the DHS “remains concerned” about “Homegrown Violent Extremists,” who have been “inspired by foreign terrorist groups.”

The DHS has said it is “committed to preventing violence and threats meant to intimidate or coerce specific populations on the basis of their religion, race, ethnicity, identity or political views.”

In a section titled “How You Can Help,” the DHS asks the public to remain aware of and report “suspicious activity and threats of violence, including online activity,” to the authorities. In a soundbite paraphrasing President Joe Biden’s inaugural address, the department also advises that “[c]ommunities are strongest when they are not divided:  Strengthen your community by standing together against violence.”

One way in which the public are advised to prepare themselves for the threat is by “[a]voiding large crowds, including protests … due to ongoing pandemic conditions.” Despite this, it is also advised that, if one does intend to take part in a protest, he do so “peacefully, safely, and wear masks.” It is unclear how wearing masks will prepare individuals with respect to the terror threat advisory.

The bulletin follows weeks of smears against Donald Trump by Democrats for “inciting insurrection” on the U.S. Capitol on January 6. Since the dust has settled on events in the Capitol that day, the official timeline contradicts the Democrats’ narrative.

In his speech at the Ellipse ahead of the Capitol riot, Trump told protesters “to peacefully and patriotically make your voices heard.” Trump’s speech lasted from around midday until 1:11 P.M., but official reports say that protesters had already arrived at the Capitol Building by 12:40 P.M., making it unlikely that anyone listening to the speech was able to be “incited to violence” by Trump at the same time as being among the rioters in the Capitol.