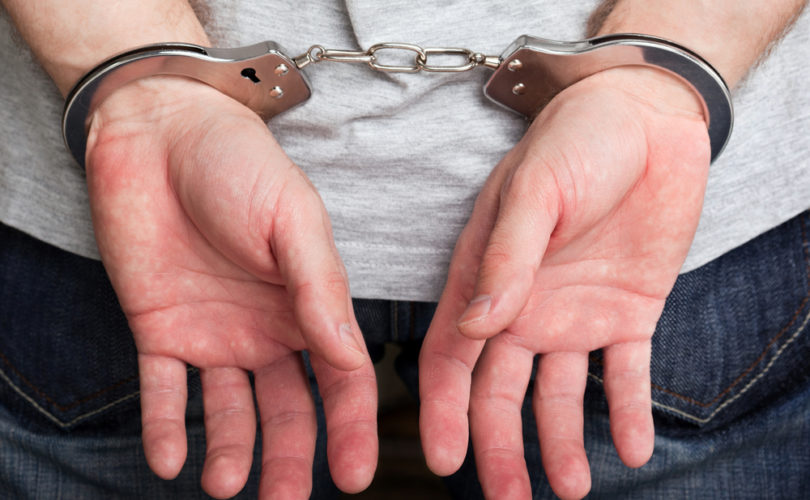 A Missouri homeschooling couple filed a lawsuit last week against local police after two officers entered their home in 2011 without a warrant, pepper-sprayed them, verbally and physically assaulted them, shot the father with a taser, and threatened to shoot the family dog – all in front of their terrified children aged 8-13.

It all began when a child protective services caseworker visited the New Hampton home of Jason and Laura Hagan to investigate a tip about a messy house. When the social worker returned for a follow-up visit a few days later, the couple refused to allow her to enter their home.

According to court documents, Mrs. Hagan stood on the front porch and asked the captain how she could help him. But he grabbed her wrist and attempted to pull her off the porch. She managed to pull away and retreated inside the home.

According the court documents, the captain then kicked Mr. Hagan as he lay across the doorway, saying: “You going to move now boy?” He then shot the father in the back with a taser. Mrs. Hagan managed to shut the front door, but only to have the captain trigger the taser — still attached to the fallen father — three more times.

At that point Sheriff Darren White joined Captain Glidden and together they forced open the family’s front door and entered the home. Both parents were lying in pain on the dining room floor at that point. Mrs. Hagan attempted to hand the police the phone connected to their legal council, but one of the officers threw the phone across the room and slapped the mother in the face, knocking off her glasses. She was then pepper-sprayed a second time. Mr. Hagan was pepper-sprayed two more times as he lay on the floor.

“I came in here nice and polite, but you just stood in the door, so I had to spray you,” the couple remembers one of the officers saying, according to court documents.

At one point the family dog was pepper-sprayed as well. As the dog barked hysterically, one officer allegedly said: “If that f**king dog doesn’t shut the f**k up I am going to blow her f**king head off.”

The couple were eventually handcuffed, led outside to the police vehicle, and thrown into separate jails. They were officially charged with resisting arrest and child endangerment, even though the Hagans say at no point during the home raid did police tell them that they were under arrest.

When Mrs. Hagan asked one of the officers about the fate of her children, he allegedly responded: “You were a rude, obnoxious b**ch, so I just took them.”

The children were taken into custody by the social worker who took them to a hospital where they were monitored for exposure to pepper spray.

The police raid did not stand up to scrutiny before a judge at the Hagan’s trial. He determined that police had violated the Fourth Amendment when they forcibly entered the home without a warrant.

“The State has not offered sufficient, if indeed any, evidence of an exception that would justify a warrantless entry,” he wrote in his ruling. “The court will not allow [an] exception to sanction warrantless entry into a private residence by pepper spray and taser. If the officer had a warrant in hand and such force was necessary, that is a different story, but those are not the facts of this case.”

The case was dismissed.

The parents had their children restored to them weeks later, but they did not regain full legal custody until five months later.

James Mason of the Home School Legal Defense Association (HSLDA), which is representing the Hagans, called the Fourth Amendment a “legal shield” that exists to protect citizens from government “mistreatment.”

“The Fourth Amendment strikes a carefully crafted balance between a family’s right to privacy and the government’s need to enforce the law. In most situations, government agents cannot simply force their way into a home. Instead, they must explain to a neutral magistrate why they need to enter the home, and they must provide real evidence to support that need.”

“This rule applies to all government agents. Court after court has agreed that there is no social services exception to the Fourth Amendment,” he said in a press release.

“When HSLDA takes cases like the Hagans’, we do not intend to show disrespect for law enforcement officers. We know that they have a difficult job. But there are rules, and they exist for a reason,” he said.

Through the lawsuit, the Hagans are seeking compensatory damages, punitive damages, and attorney’s fees.

Editor’s note: The HSLDA is asking for financial support to pursue justice for the Hagan family. Find out how to donate here.