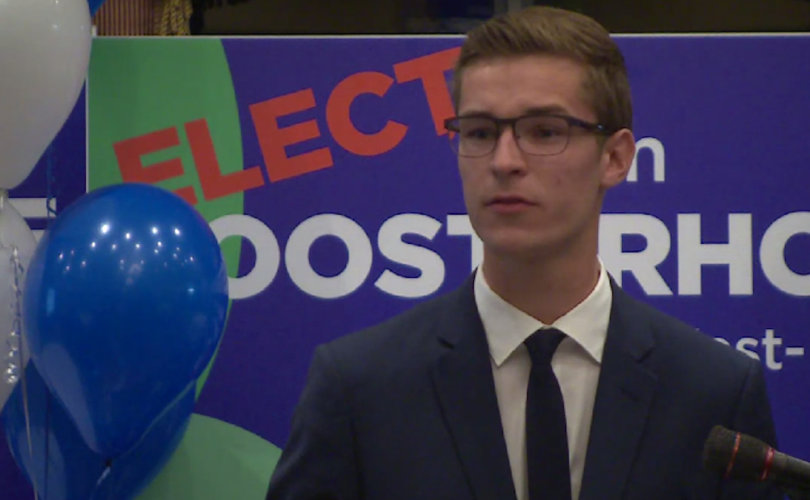 TORONTO, March 9, 2017 (LifeSiteNews) — Sam Oosterhoff, a 19-year-old homeschooled pro-life Member of Provincial Parliament (MPP), easily cruised to victory this week, after he was challenged for the nomination by a 46-year-old vice president of the Progressive Conservative Party.

The first-year university student had by then already caused a major political upset by beating Rick Dykstra, PC party president and former MP, as well as Quirk and a third contender in a September nomination battle.

In this week's unusual contest, Tony Quirk, a 46-year-old Grimsby regional councillor and Progressive Conservative Party vice president, was Oosterhoff’s sole challenger for the newly redistributed riding of Niagara West, where both live. He argued his years of experience made him the better choice.

According to Jack Fonseca, a senior political strategist for Campaign Life Coalition, Oosterhoff’s runaway nomination victory Tuesday proves that social conservatives will win when they mobilize.

And Oosterhoff’s triumph should spur pro-lifers to get involved in what’s arguably the most crucial vote Canada’s social conservatives have ever faced, says Fonseca.

That’s the May 27 election for the next leader of the federal Conservative Party of Canada.

“That individual will likely become our future Prime Minister, so we can’t overstate the importance,” Fonseca said.

“Niagara West is a microcosm which shows what we can accomplish at the macro federal level,” he told LifeSiteNews. “Just think of the federal leadership race as a giant nomination contest, and know that we can have the same impact.”

Oosterhoff will now represent the PC Party in that riding in Ontario’s June 7, 2018 election.

Oosterhoff won “because the grassroots of the party in Niagara West wanted their so-con MPP and made that clear, awarding Sam for standing by his principles with a landslide victory,” Fonseca said.

The Liberals got involved in Tuesday’s rare internecine Tory race, and they used Campaign Life endorsements as ammunition.

“The Liberals alerted the press Sam is being supported by the CLC, and the PCs shot back with three pro-life Libs who'd also been endorsed,” she tweeted. (Those are Joe Dickson, Lou Rinaldi and Mario Sergio.)

The Liberals alerted the press Sam is being supported by the CLC, and the PCs shot back with three pro-life Libs who'd also been endorsed.

“It’s great to be part of a big-tent party,” tweeted Oosterhoff in reply.

He told the crowd Tuesday that “he will always be committed to parental rights in education,”and that “the devastating impact of this overbearing government can be seen on every family,” Smith Cross tweeted.

“You know what's best for your family, not out-of-touch Toronto elites,” Oosterhoff said.

Campaign Life had endorsed both Oosterhoff and the Catholic Quirk in the September nomination, but backed only Oosterhoff in this race.

Not only has the rookie MPP proved to be a man of his convictions, but challenger Quirk revealed his “anti-family” stance in a local paper, Fonseca told LifeSiteNews.

“We had CLC supporters tell us that they were planning to vote for Quirk on account of his perceived ‘experience’, but upon learning from CLC that Quirk had made socially liberal statements, they switched to Oosterhoff instead,” he said.

“I hope this result helps encourage other pro-life politicians to stand by their principles above all else. In the long run, it pays to be true to your principles,” added Fonseca.

“It’s when you abandon your principles that you leave a bad taste in the mouths of conservatives, liberals, and libertarians alike.”

Fonseca urged pro-life and pro-family advocates to get involved in the Conservative Party leadership race.

By his calculations, 390 CLC supporters who are now within Niagara West riding bought PC memberships to vote in the September nomination.

Campaign Life “alone has 170,000 supporters across Canada, in every single one of the 338 ridings. Other pro-life groups have their own database of supporters,” he told LifeSiteNews.

“If we can sell 390 memberships in one riding, why can’t we sell a measly 100 memberships in all the others? It’s doable. Especially if all the pro-life and pro-family organizations across the country work towards the same objective.”

Campaign Life is endorsing MP Brad Trost and former MP Pierre Lemieux for leader of the Conservative Party of Canada.

“If even 100 pro-lifers in each riding joined the CPC, we could crown Trost or Lemieux as leader pretty handily,” Fonseca said.

But, he stressed, the deadline to buy CPC memberships is March 28.

“Let’s organize over the next 19 days to ensure that either Brad Trost or Pierre Lemieux wins ‘the big nomination’ on May 27,” he said.

For more information or to buy memberships, go to CLC’s website here. Or to join the Conservative Party though Brad Trost’s sign up page, click here. To join through Pierre Lemieux’s portal, click here.