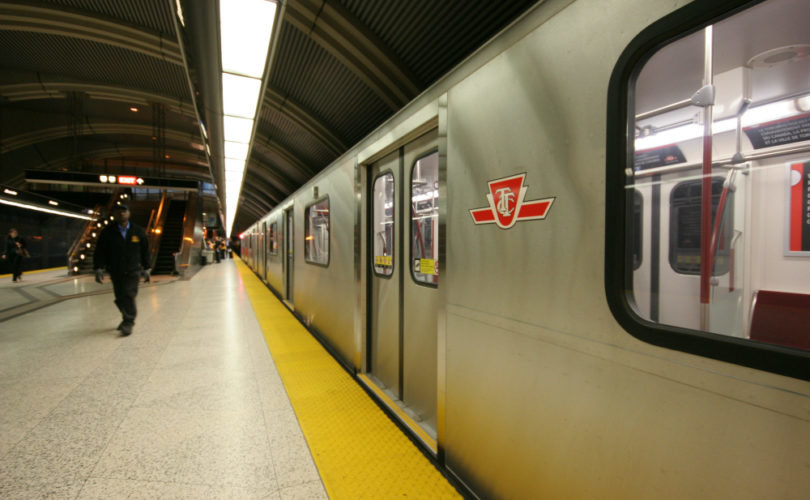 TORONTO, November 27, 2015 (LifeSiteNews) — A Canadian homosexual newspaper has “outed,” by name, the author of a private complaint that led Toronto's subway system to pull racy ads for a homosexual hook-up site that promotes sex in public venues.

Pink Triangle Press, which publishes Daily Xtra, obtained the complaint from a Freedom of Information request to the Toronto Transit Commission (TTC).

The ads, for the homosexual “cruising” website Squirt.org, depict naked men from the waist up — some provocatively embracing — and uses “non-stop cruising” for a tagline. “Cruising” refers to the risky homosexual practice of one person trying to “pick up” another person for anonymous “gay sex” in a public place, such as a bathroom, gym, park, beach, or back alley.

About 100 ads were plastered on the walls of subway trains. When complaints arose, the TTC took the ads down September 9.

“The ad was taken down as it promoted sex in public places, which is against the law,” TTC spokesman Danny Nicholson said at that time.

Canada’s Criminal Code prohibits sex in a “public place,” defined as “any place to which the public has access as a right or by invitation.”

It appears that Pink Triangle Press did not believe the reason given by the TTC, and issued a Freedom of Information request to see if it could dig up other details.

When the ads were originally pulled, mainstream media such as Toronto Star sympathetically portrayed the advertised service as a “dating website for gay men,” hinting that pulling the ads amounted to discrimination against homosexuals.

Pink Triangle Press marketing director Andrew Nolan told Toronto Star at that time that he could not know whether “homophobia” played a role without knowing the content of the complaints.

It turns out that the TTC received 16 complaints, according to Daily Xtra, one of which consisted in a complaint that the ads promoted sex in public places, including bathrooms in the TTC network.

One TTC employee — whose name was given by Daily Xtra — who issued the complaint asked superiors if it was appropriate for the public transit service to have an ad “for a site that is premised on helping guys hook up in public places (including on the TTC) on our trains.”

When asked by a superior — who was also named by Daily Xtra — if the ad suggested hooking up on the TTC, the employee responded: “No, but the premise of the website is hooking up in public places such as washrooms, parks, etc — subway station washrooms are on the site.”

“I wouldn’t suggest visiting the website at work,” the employee added.

There were also three complaints from people who identified as “gay” and who objected to the ad portraying gay men as sexually promiscuous.

One wrote: “I am a gay man and no prude… is it necessary to expose young children to nearly naked men promoting 'Non-Stop Cruising' on a website named for male ejaculation [squirt.org].”

Others who issued a complaint were also worried about the effect of the ads on children.

“There is no need to have these male sex objects advertised to our children who are taking the subway all the time. Please hold your ground and do not be fazed by these people who are trying to promote sex and their sexism through every and any means,” wrote one.

“It was uncomfortable watching the ad and the overt suggestion to ‘hook up.’ I don't have any issue with the ad in the Wellesley station, but just felt that we need to [be] mindful of the kids who ride our trains,” wrote another.

Homosexual activists, whom liberal satirist Bill Maher once called the “gay mafia,” have a reputation for digging into public records in order to expose and ruin those with views differing from their own.

One famous example is Mozilla’s Brendan Eich who was forced to resign last year as the tech giant’s CEO after homosexual activists found records of a $1000 donation he made to California's Proposition 8, which defined marriage as the union of one man and one woman, and created a national backlash.