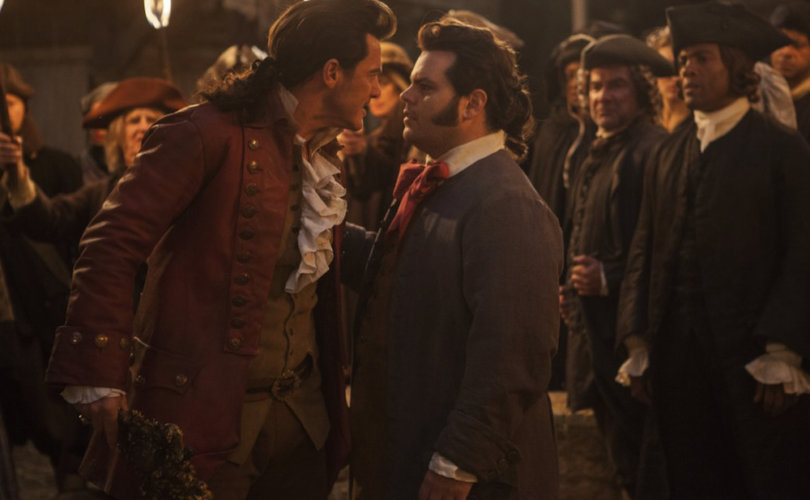 March 20, 2017 (LifeSiteNews) — A homosexual attorney is warning that Beauty and the Beast's inclusion of a “gay scene” will undermine the innocence of the many children who will watch the Disney film.

Joseph Murray is a former campaign official for conservative commentator and two-time presidential contender Pat Buchanan. He is also an administrator for LGBTrump, a group for pro-Trump homosexuals.

In describing the controversial “gay” cinematic moment between protagonist Gaston (Luke Evans) and sidekick Le Fou (Josh Gad), Beauty and the Beast director Bill Condon said, “By representing same-sex attraction in this short but explicitly gay scene, the studio is sending out a message that this is normal and natural.”

“And this is a message that will be heard in every country of the world, even countries where it’s still socially unacceptable or even illegal to be gay,” Condon said.

But as a “proud member of the LGBT community,” Murray disagrees.

“Why do we have to expose our kids to such mature themes? Do they not have plenty of time to grow up? Or maybe the point is to make them grow up too soon and that is where I part ways with my community,” he wrote in an Orlando Sentinel guest column on March 6.

Murray said he once opposed activist “Gay Days” gatherings of homosexuals at Disney theme parks for the same reason: It is inappropriate to expose young children to adult homosexuality. Now he decries Disney's “transformation” over the last two decades in which it has “worked to infuse its brand with political activism.”

A “primary benefactor” of Disney’s activism, he says, has been the “LGBT left lobby:”

“The vision for Walt’s world was clear: Entertain children. Disney characters were about hope, optimism and, above all else, making sure children were able to enjoy their innocence for as long as the outside world would permit. And Disney understood that part of its mission was to provide a buffer for as long as possible.

“Somewhere along the line, Disney went off course. No longer did it see itself as a defender of children’s innocence. Instead, it saw itself as a conduit to social change. Walt Disney became Harvey Milk.”

Milk was a “progressive gay” activist and politician who compared social and religious conservatives to Nazis and gained fame as the first open homosexual to be elected to the San Francisco Board of Supervisors. Milk had a live-in, sexual relationship with a 16-year-old boy when he was 33, according to his homosexual biographer, Randy Shilts.

Murray writes that providing “affirmation” is a poor argument for subjecting kids to adult “gay” themes.

“I was gay and grew up without gay Disney and made it just fine,” he says. “I bet the fact I was able to keep my childhood innocence played a part.”

Most social conservatives would disagree with Murray’s viewpoint on the normalcy of homosexual, bisexual, and transgender lifestyles. But they would agree with him in condemning the modern “Gay Disney’s” injection of homosexuality and other adult subjects into its entertainment products.