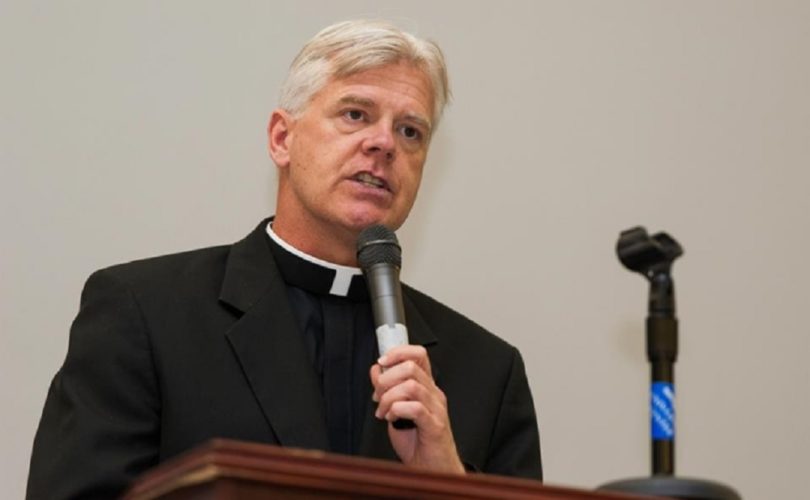 NEWARK, NJ, August 31, 2015 (LifeSiteNews) – The New Jersey Catholic priest who claimed he was fired and suffered persecution at the hands of the Archdiocese of Newark for supporting homosexual “marriage” began a new parish assignment in the archdiocese this month, after having his assertions sharply condemned.

Father Warren Hall, who also subsequently self-identified as homosexual after leaving his position as Seton Hall University Director of Campus Ministry, and then appealed to Pope Francis for his purported situation and LGBT issues, became parochial vicar for Saints Peter and Paul Church in Hoboken, and its sister parish, Saint Lawrence in nearby Weehawken, August 15.

Father Hall claimed to have been fired in May of this year after he made a pro-LGBT Facebook post. But the Archdiocese of Newark, NJ, which oversees Seton Hall, said Father Hall was not fired, but rather that his assignment there was ending in June.

The issue caused a social media backlash, with calls to reinstate Father Hall at the university, and some making allegations that his reported removal was out of line with “the words of Pope Francis.”

“Fr. Hall's assignment is ending in June,” Archdiocese of Newark Director of Communications James Goodness told LifeSiteNews at the time. “As a priest of the Archdiocese, he is available for a new assignment after the completion of this one. There's been some confusion and misperception about the issues surrounding his tenure ending at the university.”

“Father Hall was promoting an organization that has as one of its principal agenda items the promotion of same-sex unions,” Goodness said, “which conflicts with Catholic teaching.”

“Pope Francis has said that marriage is a union of man and woman,” he told LifeSiteNews. “This will not change. Continued promotion of this organization's agenda creates confusion over the clarity of Catholic teaching.”

Father Hall has remained vocal in the press and on social media about his ostensible situation, maintaining in various media reports he was fired from Seton Hall by Archbishop John Myers, stating that he disagreed with the archbishop's thoughts and actions, and claiming that he was being unduly punished.

Father Hall “came out” in May to a homosexual news publication, according to the New York Times.

He then wrote to Pope Francis July 14, posting the letter on Facebook, a Religion News Service (RNS) report said, telling the Holy Father in the letter he was without an assignment and income, and that he was experiencing alienation, firing, and silencing as a homosexual priest.

Father Hall's version of events, which sustained months of media attention, continues to differ vastly from the account provided by the archdiocese.

The priest had written to Archbishop Myers in mid-May, after he was told earlier in the month that his assignment was ending, and asked for an opportunity for a leave, Goodness said, also asking if the archbishop would be willing to make his new assignment effective in mid-August, since he had not had any vacation time.

“And Archbishop Myers did agree to that,” Goodness recounted. “So the impression that he is being punished for being, as he says, a 'gay priest,' is baseless. He made that statement weeks after the first story that he would be leaving Seton Hall.”

Goodness told RNS in the weeks following the letter's posting that Father Hall still had health insurance and room and board at Seton Hall, and also that Father Hall had been assured he would eventually get a new assignment.

“The claims Father Hall has made in his letter to the Holy Father and in his postings are outrageous and insupportable,” Goodness recently told LifeSiteNews. “They grossly misrepresented his situation and 'mistreatment.' Father Hall's letter, and the stories that it has produced, create and perpetuate an aura that he's a victim – and that's not true.”

It's not uncommon for a priest to leave one assignment and go to another, said Goodness, and in fact, the May-July period is a particularly active period for assignment changes in the Archdiocese of Newark.

“Father Hall was one of dozens of priests in the archdiocese who ended one assignment to assume a new assignment,” he said. “That's the facts of life for a priest or religious.”

Father Hall was not thrown out of Seton Hall, as he led people to believe, Goodness also told LifeSiteNews. He continued to live there, and his room and board were handled.

Father Hall continued to receive his regular salary from Seton Hall through the end of his assignment there as well and would have had only a slight gap in pay with the regular assignment change.

“This slight wait from the last paycheck at one employer to the first one at a new employer is a situation that literally thousands of people each month go through when they change employers or locations,” he said. “No priest of the archdiocese has ever lost salary during such times of
transition.”

Father Hall's health benefits remaining in force during the period between assignments is something not common in all employment situation, Goodness clarified. Plus he was able to receive stipends for Mass and continually had full faculties to serve as a priest anywhere within the archdiocese.

“So Father Hall is labeling these steps we have taken – a place to live, food on his table, assurance of his salary and benefits, a six-week paid vacation after the conclusion of an assignment, and a new assignment to continue his priestly ministry – as 'mistreatment,'” said Goodness. “I am sure that you'll agree that there are many, many laypeople both working and out of work who would like to have that kind of 'mistreatment.'”

“I think it is also important to point out to you that Father Hall's inference that he's one of the ones in the Church being 'silenced' doesn't make sense,” he continued. “In addition to National Catholic Reporter's coverage of his latest antic (the letter to the pope), a casual Google search will show zillions of hits about him and what he's crying over.”

“I wouldn't characterize that kind of activity as being silenced,” Goodness contended.

After months of media display, Father Hall's new assignment took effect after his requested vacation time was over in August, and Goodness told LifeSiteNews his duties as a parish priest in Hoboken will be the same as another parochial vicar in the archdiocese.

“Pope Francis's comment, 'Who am I to judge?,' is very apropos here,” said Goodness. “But someone who labels himself or another primarily in terms of sexual orientation or attraction contradicts what the Church teaches – that every person is to be accepted with respect, compassion, and dignity.”

“Sexual orientation or attraction isn't in itself a hindrance to a man's ability to be a priest,” Goodness told LifeSiteNews. “What is important is a priest's commitment to living his ordination promises and embracing honestly what priesthood requires: to live a life of chaste celibacy, to support and promulgate the teachings and traditions of the Church, and to respect and obey the authority of the Church.”