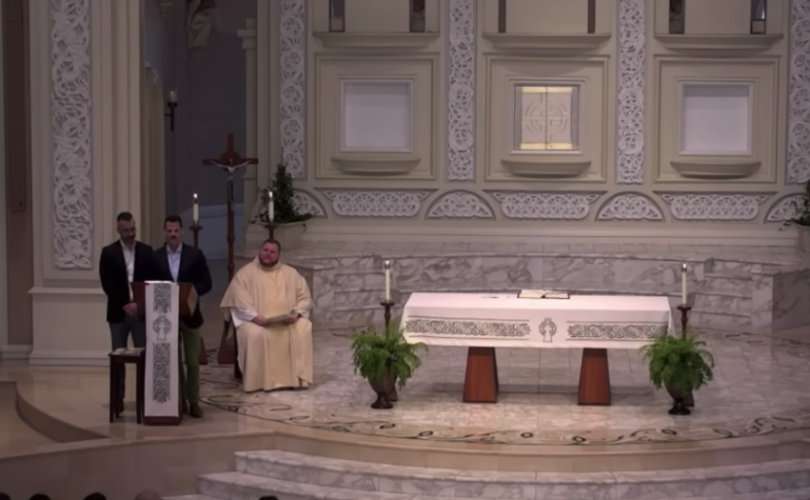 CHICAGO (LifeSiteNews) – A homosexual couple gave a “Gospel reflection” at Mass on Sunday at Old St. Pat’s church in the Archdiocese of Chicago.

Fr. Joe Roccasalva, a member of the Midwest Augustinians, did not give his own homily after the Gospel at the 9 a.m. Mass, but instead invited two homosexual men who are in a “marriage” to give a “Gospel reflection.” The subtitle on the livestream referred to the talk as a homily, however. Lay individuals are not allowed to give homilies under Canon Law.

The pair of men, who adopted two children, compared their life to the miracle of the multiplication of fishes and loaves by Jesus Christ.

Alex Shingelton and Landon Duyka have been parishioners at Old St. Pat’s for ten years, drawn to the church because of its “Gay Men’s Group” which encourages an active homosexual lifestyle. During their “reflection” the two men talked about how a prior pastor, Fr. Thomas Hurley, said Old St. Pat’s had “figured it out” when it came to affirming someone’s homosexual inclinations.

“This week Chicago is celebrating pride and of course today is Father’s Day, and conveniently we tick both of those boxes,” Duyka said.

He said that as young boys they both “wasted countless hours of our lives in church” trying to “pray the gay away.”

Shingleton then began to compare their own lives to “miracles.” The pair listed four “miracles” – the legalization of same-sex “marriage” in the United Kingdom (where Shingleton is from), the adoption of two children, and then finding a homosexual-affirming community at Old St. Pat’s.

The reflection ended with a standing ovation from Fr. Roccasalva and the parishioners. LifeSiteNews contacted Fr. Roccasalva Tuesday morning at his Providence Catholic High School email address where he also teaches, but did not receive a response.

Here’s a standing ovation for the two men and their family, deprived of a mom. The priest helps clap for a union which Pope Francis has declared cannot receive a blessing and the Church has held for 2,000 years is against God’s design. pic.twitter.com/9N0sIA0CGh

LifeSiteNews asked if he had received permission from Cardinal Blase Cupich or the archdiocese to let lay people give a homily, if he assented to the Catholic Church’s teachings on homosexuality, and what he wanted parishioners to get out of the reflection from the homosexual couple.

LifeSiteNews also contacted, to no avail, the media relations office for the archdiocese and asked if Fr. Roccasalva had received permission to let two homosexual men give a homily and if it planned to speak to him about the matter.

The Catholic Church is clear on the issue of homosexual relationships and activity.

“Basing itself on Sacred Scripture, which presents homosexual acts as acts of grave depravity, tradition has always declared that ‘homosexual acts are intrinsically disordered,'” the Catechism of the Catholic Church (2357) states. “They are contrary to the natural law. They close the sexual act to the gift of life. They do not proceed from a genuine affective and sexual complementarity. Under no circumstances can they be approved.”

The Congregation for the Doctrine of the Faith in 2021 rejected the idea of “blessing” couples in same-sex unions. The Congregation stated that it is “not licit to impart a blessing on relationships, or partnerships, even stable, that involve sexual activity outside of marriage (i.e., outside the indissoluble union of a man and a woman open in itself to the transmission of life), as is the case of the unions between persons of the same sex.”

Lay homily just the latest liturgical abuse in the archdiocese

The lay homily by homosexuals is the latest liturgical abuse in Cdl. Cupich’s archdiocese. Pope Francis recently named Cdl. Cupich to the Dicastery for Divine Worship and the Discipline of the Sacraments.

In June, parishioners at Holy Family Catholic Community danced on the altar and throughout church to end Mass, after hearing a homily from a lay person, which included taking God’s name in vain several times. That same parish previously ended a Mass with the priest, Fr. Terry Keehan, using a guitar to make the sign of the cross over the parishioners.

Cdl. Cupich has also ordered diocesan priests and the Canon Regulars of St. John Cantius to celebrate the Novus Ordo on the first Sundays of each month, at the Triduum, Pentecost and Christmas. Priests must request permission to say the Mass ad orientem. While Cdl. Cupich justified the decision by referring to Traditionis Custodes, though nothing in the document instructs bishops to restrict the Traditional Latin Mass in this way or to regulate the liturgy in this manner.

Meanwhile, the archdiocese has struggled with vocations from its non-Latin Mass parishes. The archdiocese, with more than two million Catholics, ordained only two priests this year. One of those two priests came from St. John Cantius.