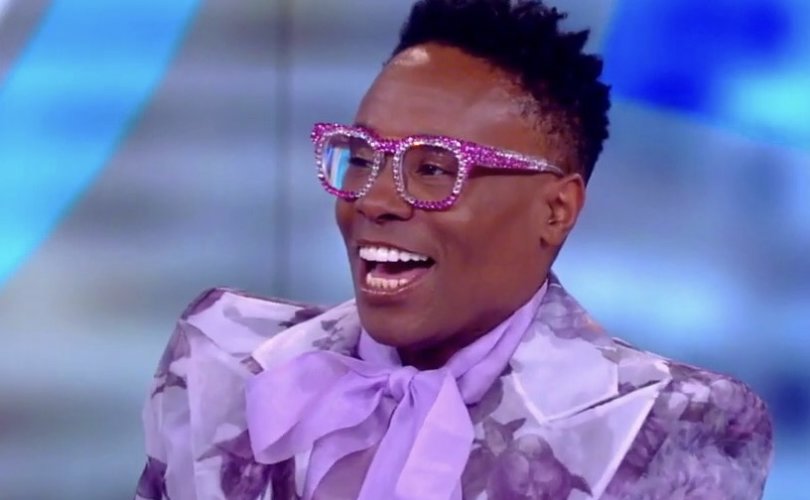 HOLLYWOOD, California, October 25, 2019 (LifeSiteNews) — The role of the fairy godmother in Sony’s upcoming live-action Cinderella movie will be played by a homosexual man.

Billy Porter, 50, has been known for his current role as Pray Tell in the FX ballroom drama Pose, as well as for the extravagant hats and dresses he wears. Due to be released in 2021, Sony’s version of the classic Cinderella tale has been billed as a modern story that features an orphan girl who finds true love with a prince despite years of enslavement by her wicked stepmother. The role of Prince Charming reportedly has not yet been cast.

The Emmy Award-winning Porter plays the role of a fairy godmother who grants a wish to Cinderella, who is played by popular Cuban-American singer Camila Cabello. According to a statement from Sony, Cabello will be “integrally involved in the music for the film.” The production is being directed by Kay Cannon, who has helmed the Pitch Perfect movie franchise, as well as several television productions.

Cinderella will be Porter’s seventh movie role. In The Broken Hearts Club, he played a jaded homosexual man who is cast aside by his lover. An acclaimed singer and actor, Porter has played in Broadway productions that have included Kinky Boots, Angels in America, Miss Saigon, Grease, Jesus Christ Superstar, Chicago, and King Lear. He has also recorded several albums.

According to People magazine, Porter became the first overtly homosexual black male to win an Emmy Award for best actor (2019) for the role of Pray Tell in FX’s Pose. He’ll also direct a forthcoming episode of Pose and is writing a memoir.

Pose is a television series that depicts black and Latino homosexuals and transvestites of the 1980s who participated in underworld ballroom competitions to contend for dance trophies and other recognition for their choreography and costumes. Created by Ryan Murphy, Brad Falchuk, and Steven Canals, the series premiered in 2018. Cast members have included Porter, Kate Mara, James Van Der Beek, Patti Lupone, Mj Rodriguez, Dominique Jackson, Dyllón Burnside, and Sandra Bernhard.

The show has received acclaim from legacy media. A CNN review said the series “revels in transgender joy.” Deadline noted that “Ryan Murphy sets largest transgender cast ever.” It has received award nominations, including the Golden Globe Award for Best Television Series – Drama, and the Golden Globe Award for Best Actor in a Television Series Drama to Porter. In June, FX announced that it has picked up the series for a third season.

Also in June during “Gay Pride” month festivities, an episode of Pose featured a lesbian activist who made false claims about the Catholic Church. On the show, the lesbian shouted her hatred of the Church to the approval of a crowd. “The Catholic Church has spent millions of dollars putting the false message into the world,” she shouted, “that condoms don't work and that abstinence is the only way to fight HIV. That is a lie. And that is morally wrong. So we're staging a die-in in the middle of that congregation as a peaceful protest against the annihilation of our community.”

In a press release, Bill Donohue of the Catholic League noted that it was not the Church but his organization that posted ads about the inefficacy of condoms in 1994. He said the ad campaign cost $10,000, not millions. The die-in to which the lesbian referred occurred in 1989 and was not peaceful. Protesters entered St. Patrick Cathedral in New York during a Mass, chained themselves to pews, blocked Catholics from going to Communion, yelled obscenities, and spat the Eucharist on the floor. “It was Nazi-like,” he wrote.

Donohue also recalled that Cardinal John O’Connor and the Catholic League did not demand that homosexual bathhouses remain open in New York City. After AIDS was discovered in 1981, he wrote, it was LGBTQ leaders who demanded that the places of contagion remain open.

“That’s how the annihilation of the gay community happened. Even gay activists such as Larry Kramer have said so,” Donohue said.

“Finally, Catholic bashing, just like gay bashing, can never be defended. Nor can lying about history to make a political point,” Donohue concluded.