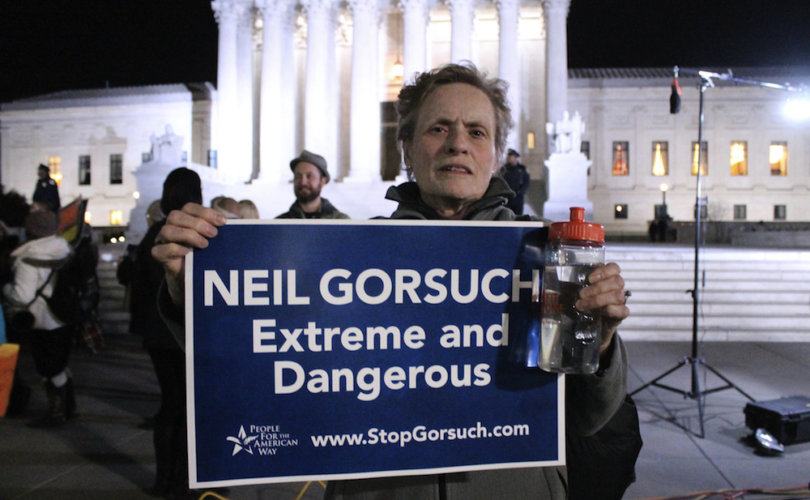 People for the American Way protest the nomination of Neil Gorsuch in front of the Supreme Court.Elvert Barnes / Flickr

Lambda Legal published an article titled “Neil Gorsuch has an unacceptable, hostile record toward LGBT people,” accompanied by a graphic of Gorsuch’s face with the word “Dangerous” covering his eyes. The article says Gorsuch’s decision in the 2013 10th Circuit Hobby Lobby case is “disqualifying.”

“The Hobby Lobby decision set a terrible and destructive standard for bosses being allowed to meddle in our sex lives and decide whether or not birth control is covered by the employer’s insurance plan. In Judge Gorsuch’s decision, he calls the inclusion of health coverage that includes birth control – ‘complicity … in the wrongdoing of others.’”

However, this example from a Gorsuch opinion cited by Lambda Legal is precisely why social conservatives are excited about his nomination. They agree with the implication that people or small businesses should not be forced to take part in practices they believe are morally wrong, whether it is subsidized contraception or a homosexuality-based “wedding.”

Social conservatives hope the same reasoning cited by Trump’s nominee of not forcing citizens to be “complicit … in the wrongdoing of others” would lead a potential Supreme Court “Justice Gorsuch” to also rule against laws compelling Christian- and faith-based businesses to participate in homosexual “marriages” if they believe that homosexual behavior is wrong.

As Mat Staver, founder and chairman of the Christian legal group Liberty Counsel, wrote, Gorsuch “supported the religious liberty arguments against forced abortion mandates under ObamaCare in [the decisions] Hobby Lobby and Little Sisters of the Poor.”

The Lambda Legal article states: “We absolutely must not confirm a Supreme Court nominee who has ruled that the religious beliefs of employers can trump the law. It is a short hop from birth control restrictions to restrictions on the intimate relationships and healthcare needs of LGBT people.”

“Judge Gorsuch’s record over the last 14 years, especially on religious liberty, gives Americans every reason to believe he will make a fine Supreme Court justice. His reputation as a judge with integrity and dedication to the Constitution should be an encouragement to all Americans.”

FRC, while fighting on a range of issues from abortion to pornography, is the leading pro-family opponent of the LGBTQ agenda in Washington, D.C.

Another major pro-family group that opposes the homosexual-bisexual-transgender agenda is American Family Association (AFA). Its president, Tim Wildmon, urged his group’s millions of followers to thank President Trump for the Gorsuch nomination.

“Gorsuch is a believer in a broad definition of religious freedom and sided with Christian employers and religious organizations in the cases of Burwell v. Hobby Lobby Stores, Inc. and Little Sisters of the Poor.

“In the Hobby Lobby case, he wrote: ‘The ACA's [Obama] mandate requires them to violate their religious faith by forcing them to lend an impermissible degree of assistance to conduct their religion teaches to be gravely wrong.’

The homosexual legal group also cites then-Circuit Judge Gorsuch’s ruling in a 2015 case, Druley v. Patton, involving a transsexual prisoner who sued “the Oklahoma Department of Corrections had violated her constitutional rights by denying her medically necessary hormone treatment and her request to wear feminine clothing.”

Lambda Legal faults Gorsuch for joining a ruling that stated, in part:

“To date, this court has not held that a transsexual plaintiff is a member of a protected suspect class for purposes of Equal Protection claims. . . . Ms. Druley [a biological man] did not allege any facts suggesting the ODOC defendants' decisions concerning her clothing or housing do not bear a rational relation to a legitimate state purpose. Thus, she has not demonstrated a likelihood of success on her Equal Protection claims.”

It cites the following as evidence for that charge:

HRC states that it “has taken the extraordinary step of opposing this Supreme Court nominee prior to his confirmation hearing — a first for the organization.”

For a conservative defense of Gorsuch and his judicial record, see The Daily Signal, put out by the conservative Heritage Foundation.

The Daily Signal piece reports on the “Chevron deference” below:

“Courts will typically defer to an administrative agency’s interpretation of an ambiguous statute if that interpretation is reasonable. Known as ‘Chevron deference,’ this practice is controversial and often criticized by conservatives.

“In 2016, Gorsuch authored a separate concurring opinion, explicitly calling Chevron deference into question. He wrote, ‘ … the fact is Chevron … permit[s] executive bureaucracies to swallow huge amounts of core judicial and legislative power and concentrate federal power in a way that seems more than a little difficult to square with the Constitution of the framers’ design.’”

Yet another homosexual-bisexual-transgender organization, the National LGBTQ Task Force, put out this harsh statement calling Gorsuch “out of touch.”

“Judge Neil Gorsuch’s record reveals a jurist who: believes that bosses should control their employees’ private health care decisions; supports the misuse of religion to legalize discrimination; and holds LGBTQ equality with disdain. He is also a darling of those who are vehemently opposed to marriage equality. He seems like someone who aligns perfectly with Donald Trump and Mike Pence’s view of the world, but is completely out of touch with the realities of most people’s lives,” said Rea Carey, Executive Director, National LGBTQ Task Force.”

The Task Force is a leftist organization that supports — beyond homosexuality and transgenderism — “polyamory” (multiple-partner sexual unions), sadomasochism and other practices on the sexual and gender fringe. Every year at its “Creating Change” conference for LGBTQ activists, it gives out a “Leather Leadership Award” to a prominent sadomasochism (“kink”) advocate.