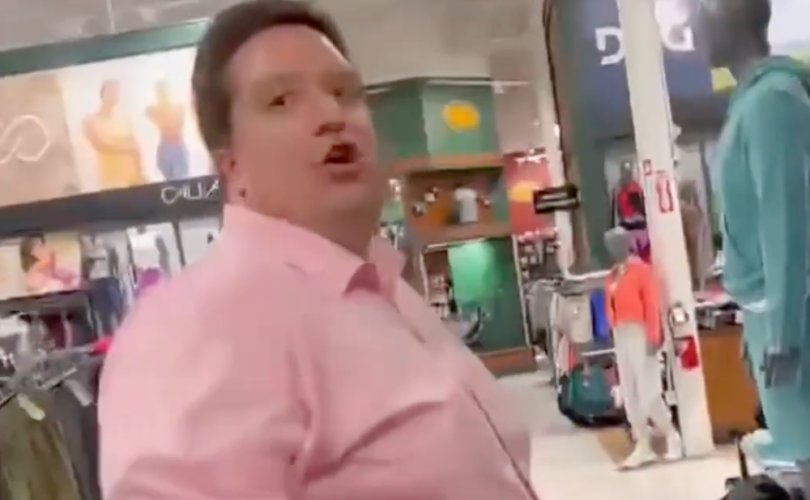 VESTAL, New York (LifeSiteNews)— A homosexual TV anchor working for an NBC affiliate has been caught trying to meet up with an underage boy.

An anti-pedophilia group called 607 Predator Hunters posted a video of them confronting Zach Wheeler, who then worked with WETM 18 in Elmira. The group confronted Wheeler in what appears to be a Dick’s Sporting Goods store in Vestal, three hours away from Elmira.

Wheeler initially claimed he thought the boy was at least 18, and then said he was “actually looking to do a story on this… I was here to talk to that kid, to get him off of these apps, that’s what it is” and not to “have sexual relations.” He identified the apps as Grindr and GROWLr, dating apps popular with homosexuals.

Wheeler then suggested 607 Predator Hunters were targeting homosexuals, asking why they “do this to gay and lesbian people.”

“We do this to everyone…We catch pedophiles,” the group responded.

The group then read him chat logs, which included the fictitious boy mentioning he was “almost 16” and in high school. When confronted with the evidence that he had talked about cuddling and watching a movie, Wheeler denied he had any plans to do so. He said he planned only to drive the minor back to the minor’s home.

WENY, a WETM competitor, posted screenshots of some of the chat logs.

“I’m actually a kind, Christian person,” the TV anchor said. “I have no desire [to have sex with a minor].”

He then backtracked to saying he planned to run a story on the sting, claiming he didn’t even plan to come to meet the boy. The group then reads him more of his messages.

WETM 18 announced on Monday that Wheeler no longer worked for them.

“Friday evening, WETM was made aware of a video posted to YouTube regarding one of our employees,” the news station posted on its Facebook page. “The local group that posted the video claimed that the employee engaged in inappropriate behavior.”

“WETM management investigated the questions raised by the video, and the employee is no longer employed by WETM,” the station announced.

The anti-pedophile group said it reported Wheeler to the state police. “Information has been turned over to the State Police!! Will continue to update as things unfold,” it posted on its Facebook page Monday.