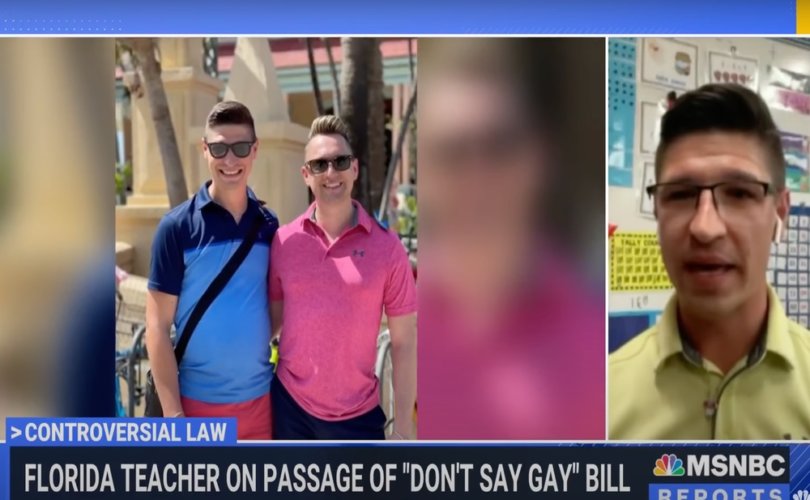 (LifeSiteNews) — A homosexual kindergarten teacher told MSNBC on Tuesday he’s worried he’ll no longer be allowed to talk with five-year-olds about his relationship with his “partner” due to Florida’s new law prohibiting teachers from instructing young children about sexuality.

The legislation, dubbed the “Don’t Say Gay” bill by opponents, bans classroom instruction regarding sexual orientation and gender identity for kids in kindergarten through third grade. While legacy media outlets, corporations, and activists have vocally opposed the legislation, its provisions appear to resonate with many Americans. A recent Daily Wire-commissioned poll found that 64% of Americans and 68% of parents supported the content of the law.

RELATED: Disney vows to fight Florida law that protects students from being groomed into LGBT lifestyle

According to the Florida kindergarten teacher, however, the bill “truly makes me feel like I am not trusted as a professional.”

“I know my kindergarten standards through and through and nowhere in our curriculum does it have anything about teaching sexual orientation or sexual identity,” Bernaert said, arguing it’s “crazy” that lawmakers believe sexual indoctrination is going on in classrooms, but adding that “We should be able to have discussions and that’s what we’re encouraged to do in kindergarten.”

“My kids do have questions,” he said. “They want to know who my partner is in pictures outside of my classroom, and I should be able to speak to that.”

Asked whether he fears he “won’t even be able to talk about” his “personal home life” with the children in his class, Bernaert responded, “Absolutely.”

“It scares me that I am not going to be able to have these conversations with my children,” he continued, “because they’re going to ask me what I did on the weekend. I don’t want to have to hide that my partner and I went paddle boarding this weekend.”

Florida’s HB 1447, signed into law Monday, states that “classroom instruction by school personnel or third parties on sexual orientation or gender identity may not occur in kindergarten through grade 3 or in a manner that is not age appropriate or developmentally appropriate for students in accordance with state standards.”

Florida Republican Gov. Ron DeSantis has rejected criticism of the legislation, stating that he won’t back down from protecting children and supporting parents.

Gov. DeSantis says that Florida will not compromise on the rights of parents: