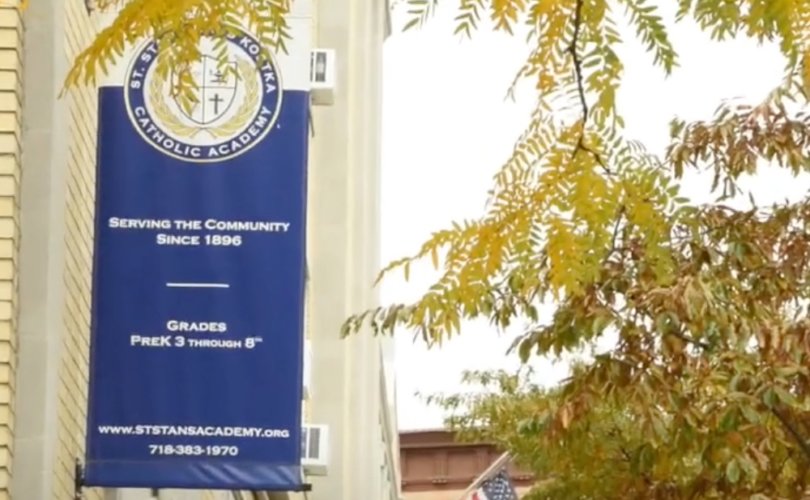 BROOKLYN, New York (LifeSiteNews) – A federal district judge in New York found in favor of a Catholic school in Queens against a homosexual teacher who claimed he had been fired for being gay.

In his opinion, Judge Eric Komitee of the U.S. District Court for the Eastern District of New York ruled that Cody Butler’s claims against St. Stanislaus Kostka Catholic Academy do not fall under the protections of Title VII of the 1964 Civil Rights Act. Komitee ruled that St. Stan’s and the Diocese of Brooklyn were exempt from Title VII because of the free exercise clause of the First Amendment, deciding that Butler was hired as a “ministerial employee,” helping St. Stan’s fulfill its “ministry.”

Shortly after signing his contract in 2015, Butler declared to the school his intention to “marry” his same-sex boyfriend. According to the contract Butler signed, as well as St. Stan’s school handbook, teachers are expected to live according to Catholic moral doctrines in their personal lives and could be viable for termination if found to violate “the tenets of Catholic morality or teaching contrary to Catholic doctrine.”

Komitee also noted that St. Stan’s principal testified that teachers are expected to “incorporate” Catholic values into lessons regardless of subject matter, and that teachers would “play a vital role in advancing the mission of the Catholic Church” and bear “the awesome responsibility of bringing the Gospel message to the students,” according to a letter sent to staff.

Komitee also referred to the church autonomy principle, which maintains that the government cannot interfere with church policies based on religious doctrine.

“That principle is broader than the ministerial exception,” Komitee noted and said it would apply when the defendant “has proffered a religious reason for termination.”

In addition, Komitee cited the Supreme Court’s 2020 decision in Our Lady of Guadalupe v. Morrisey-Barru, which dealt with religious schools’ rights to fire or hire teachers based on religious principles. Justice Samuel Alito, explaining the role of a teacher at a religious school, had written, “The religious education and formation of students is the very reason for the existence of most private religious schools, and therefore the selection and supervision of the teachers upon whom the schools rely to do this work lie at the core of their mission.”

“The bottom line is that courts have long recognized the church-autonomy doctrine, and no binding authority has ever said that the ministerial exception eclipses this doctrine in employment-discrimination cases,” Komitee noted.

“Under controlling case law, the church autonomy doctrine applies in the employment-discrimination context, as it does elsewhere. And this principle forecloses judicial inquiry into the plausibility of St. Stans’ asserted religious justifications in this case.”

Komitee also decided that, as state and local statutes are based on federal law, and that federal law protects St. Stan’s rights to fire Butler for refusing to follow Church teaching, he declined to exercise jurisdiction over local statutes.

In 2015, St. Stanislaus Kostka Catholic Academy hired Cody Butler as a teacher. After attending a new teachers’ orientation, Butler wrote the school a letter of complaint.

“I am concerned about my position within the diocese and school,” Butler’s letter states.

“The tones of the speakers were strident at times and I cannot tell if I would be accepted. I am homosexual and plan on marrying my boyfriend eventually, and after being told all day that I have to live church doctrine I feel wounded and unwanted,” the letter continues.

“I am concerned. I want to teach the kids at St. Stan’s more than anything, but I put the decision in your hands now rather than at some point down the line. Would I still be a welcome member of the St. Stan’s community?”

St. Stan’s principal forwarded the letter to the superintendent of schools for the Diocese of Brooklyn for advice, and the school fired Butler the following day. A letter was sent to Butler, but he did not receive it in time for the start of the school year, Metroweekly reported.

A physical copy of the letter was handed to Butler, and he filed a complaint with the Diocese and the New York City Human Rights Commission. He filed a lawsuit in June 2019, claiming that the school had violated his rights under Title VII of the 1964 Civil Rights Act, as well as rights protected by state and local statute. The Supreme Court ruled in Bostock v. Clayton County that Title VII protected sexual orientation and gender identity in addition to biological sex the following year.

The school argued that it had not fired Butler for his sexual orientation but for his “statement of intended conduct.”  The Catechism of the Catholic Church states, “Basing itself on Sacred Scripture, which presents homosexual acts as acts of grave depravity, tradition has always declared that ‘homosexual acts are intrinsically disordered.’ They are contrary to the natural law (CCC 2357).” The Catechism further explains that people with homosexual tendencies are called to live a life of chastity.

Teachers have been fired from Catholic schools for attempting to “marry” same-sex partners in the past. In 2013, Michael Griffin, a teacher at Holy Ghost Preparatory School in Philadelphia, was fired for announcing his intention to file for a marriage license with his boyfriend.

In 2017, a Catholic school in the Diocese of Charlotte, North Carolina fired Lonnie Billard, a drama teacher at Charlotte Catholic High School, for announcing on Facebook his intention to “marry” his boyfriend. Billard filed a lawsuit against the school and the diocese with the American Civil Liberties Union (ACLU). A federal district judge ruled in favor of Billard in September 2021, and the diocese appealed the decision in April this year.

In 2017, the Archbishop of Indianapolis, Charles Thompson, asked Brebeuf Jesuit Preparatory School not to renew the contract of a homosexual teacher for “marrying” his boyfriend. The school rejected his request, and in 2019, Thompson stripped Brebeuf of its Catholic status, announcing that he no longer recognizes the school as a Catholic institution.