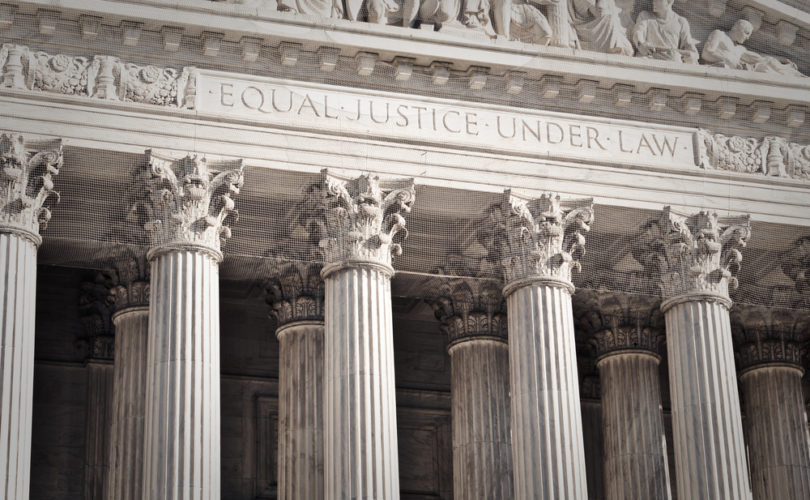 WASHINGTON, D.C., May 1, 2015 (LifeSiteNews.com) – As the Supreme Court prepares to decide on the redefinition of marriage in America, an unconventional demographic has come forward to support the status quo: same-sex attracted men and their wives.

On April 3, some 21 named parties (three of the parties' wives are not named) filed an amicus curiae brief in the four marriages cases before the Supreme Court. Ohio, Tennessee, Michigan, and Kentucky are defending marriage, as defined as between one man and one woman. The Court heard oral arguments for the consolidated four cases on April 28.

The men say in the brief that – like those suing to impose a redefinition of marriage on the nation – they, too, are “same-sex attracted men [whp] have a sexual orientation that attracts them to the same sex. Most identified their feelings at a young age.”

However, these couples “choose to build their families on the foundation of marriage between a man and a woman.”

“All agree that marriage between a man and a woman is inherently unique, and all have chosen to marry and remain married to their wives – notwithstanding their attractions to men – because of their realization that such marriages bring joy and happiness to themselves and to their spouses, children, grand-children, and communities,” the brief says.

The brief makes a sharp distinction between homosexual inclinations and chosen behavior. “[A]mici fully accept the reality of their same-sex attractions,” the parties state, “and fully affirm their individual self-worth, just as they are. But they also attest that their attractions do not dictate their relationships. While they do not have a choice about their attractions, they do have a choice about their relationships.”

The brief is replete with personal testimony from the amici, all of whom are married to women in spite of their admitted same-sex attractions.

“I can't imagine what life would be like without [wife] Erin and my boys,” says Danny Caldwell. “Some people would probably say, 'You're not happy; you're just suppressing things.' They can think what they want but…I wouldn't want it any other way.”

Joshua Jackson, another amicus, describes how as a young man he moved to California, to “an environment that openly encouraged same-sex relationships,” where “it felt so good to be close to other men.”

Yet he met and fell in love with Alyssa, who would become his wife, not long after the move.

“She had accepted me completely,” Jackson writes, “and I was completely comfortable with her.” The brief elaborates that “Alyssa recognized that she loved [Jackson] for who he was, not in spite of his attractions, but because of them.”

Bill Seger's testimony touches on the inevitability some men feel when they are pigeonholed as homosexuals. “After many confusing years,” the brief states, “he told himself, 'Okay, this is it, I'm gay, I can't do anything about it. I might as well just live it.”

Many of the amici echo this point: friends, relatives, and others, upon learning of their same-sex attractions, conferred upon them the status of “gay” and told them that their path was fixed. One amicus recalls being told that “you just need to accept this.” Another was convinced by a relative after nine years of marriage that his same-sex attractions constituted “who I am and [that] I needed to live my life that way.”

Doug Mainwaring, one of the amici and a frequent writer on children's rights, spoke to pro-marriage and pro-family advocates at the Tuesday rally that coincided with the Supreme Court oral arguments on the marriage case Obergefell v. Hodges. He explained how he had divorced his wife and pursued same-sex relationships but declared that he considered reconciling with his wife and repairing their marriage the best decision of his life.

“Don't allow marriage,” Mainwaring concluded to the crowd, “to be sacrificed on the altar of political correctness.”

Pro-redefinition advocates are not convinced by the amici's arguments. Slate's Mark Joseph Stern, for example, looks at these petitioners and their reasoning with a mix of incredulity and ridicule. He calls the idea “that a marriage between a gay man and a straight woman can be 'deeply fulfilling'” a “depressing delusion” and “bleakly mistaken.” “You can decide for yourself,” he continues, “why these men are so desperately eager to prove to the court that their marriages aren't 'fakes and shams.'”

Yet “Same-Sex Attracted Men and Their Wives” are not alone. Other unconventional parties who have come forward in defense of marriage include “Parents and Friends of Ex-Gays & Gays” and a number of individuals raised by same-sex couples.