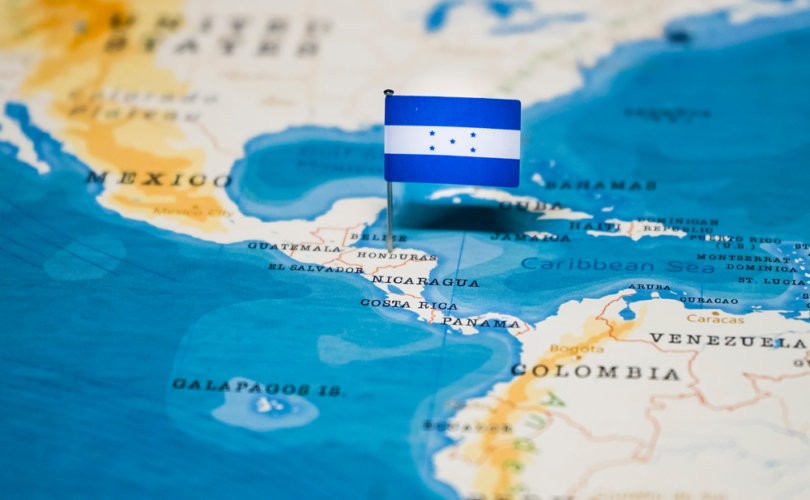 Map and flag of HondurasShutterstock

After recently voting to fortify its legal ban on abortion with a “constitutional lock,” voting 88-28 in favor of the reform in the previous legislature, Congress ratified that vote by the new legislature, increasing the vote share to 90 votes in favor, thus making the pro-life position even stronger.

Honduran law requires that, for a constitutional reform to be validated, it must be proposed and approved by one legislature and subsequently ratified by a second. Today’s ratification means that a three-quarter majority of Congress will be required to make any changes to the constitution of Honduras, which contains strong pro-life and pro-family protections.

It is expected that the new decree will be published Friday, January 29, in the Official Journal of the State of Honduras, La Gaceta.

All abortions, including in a case of rape or incest, have been illegal in Honduras since 1982. Currently, Article 67 of the Honduran constitution states that “(t)he unborn shall be considered as born for all rights accorded within the limits established by law.”

The new “Shield Against Abortion in Honduras” bill enshrines in the Honduran constitution the illegality of abortion, saying “it is considered prohibited and illegal by the mother or a third party to practice any kind of interruption of a life that is about to be born.”

Honduras’ new pro-life bill comes only weeks after the Senate in Argentina in December passed a law allowing abortion in the first 14 weeks of pregnancy. According to legislator Mario Pérez, the new law was brought forth in response to the push for legalizing abortion in other Latin American nations such as Argentina.

“This reform arises from the wave of constitutional reforms in Latin American countries, promoted by leftist governments led to legalize abortion, as happened in Argentina recently, and that cannot be allowed in Honduras,” said Pérez, a member of the conservative National Party, before the vote.

During a virtual floor debate of the bill, Pérez said the bill will enact a “constitutional lock” that will stop any future meddling or liberalization of the nation’s current pro-life laws protecting the unborn.

According to a BBC report, Pérez said “every human being has the right to life from the moment of conception.”

Francisco Rivera of the National Party said, “As a representative of my department in Olancho,” she knew that “putting the lock on this reform so that a qualified majority is needed is the right thing to do, and I vote in favor of the initiative.”

Many politicians in Latin American countries blasted the legalization of abortion in Argentina.

Brazil President Jair Bolsonaro came out strongly against pro-abortion laws, saying on Twitter: “I deeply regret the lives of Argentine children, now subject to being cut from their mothers' wombs with the consent of the state. As far as it depends on me and my government, abortion will never be approved on our soil. We will always fight to protect the lives of the innocent!”

Mexico President Andres Manuel Lopez Obrador has declined to entertain the idea of legalizing abortion via Mexico’s Congress. The day after Argentina legalized abortion, Obrador said abortion is “a decision for women” and a national referendum should be the only way for the nation to decide if it ever becomes legal.

In a recent pro-life victory, the Mexican Supreme Court ruled against legalizing abortion in a 4-1 vote.

With files from LifeSite’s Anthony Murdoch.