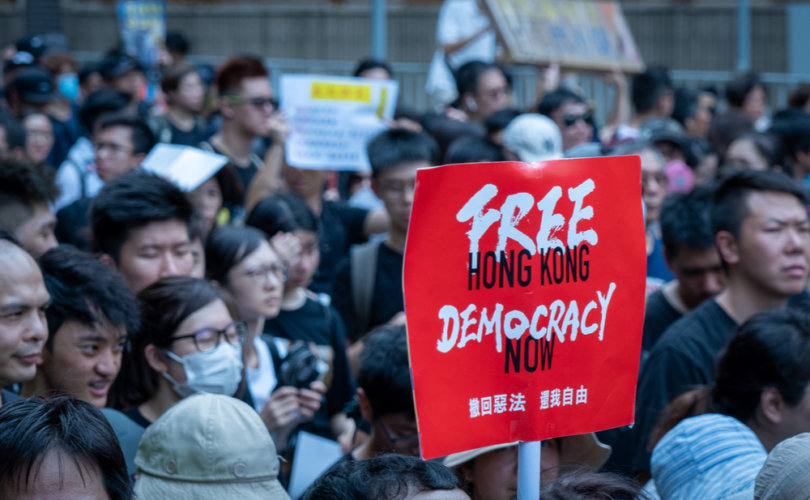 Hong Kong, January 7, 2021 (LifeSiteNews) — Officers in Hong Kong arrested dozens of prominent pro-democracy activists in early morning raids Wednesday, which are seen as Beijing’s latest attempt at stomping out any remnants of democracy in the former British colony that is now administered by China.

A total of 53 people were arrested by Hong Kong authorities under China’s new national security law (NSL). The individuals arrested were accused of “subverting state power” for allegedly holding and promoting primaries for pro-democracy candidates for the now-postponed Hong Kong election.

In July, Hong Kong’s leader Carrie Lam announced that the planned elections would be postponed for one year, until September 5, 2021, referring to an apparent worsening COVID-19 outbreak in the region.

According to the Hong Kong police, 47 people were arrested for participating in the primaries, and a total of six people for holding them. Police searched a total of 72 sites and ordered four media companies to hand over their materials, as well.

The arrests are seen as the most brazen attempt yet by Chinese President Xi Jinping, who has slowly been turning once free Hong Kong into an authoritative dictatorship under tight control by Beijing.

The NSL criminalizes any acts which are deemed to be secession, terrorism, subversion, or collusion with a foreign or external force.

Under the NSL, the CCP now has the power to effectively muzzle any resistance to Beijing’s ever-tightening control over Hong Kong.

Maya Wang, who is a senior China researcher at Human Rights Watch, said that any remaining “veneer of democracy in the city” has vanished.

“Beijing once again has failed to learn from its mistakes in Hong Kong: that repression generates resistance, and that millions of Hong Kong people will persist in their struggle for their right to vote and run for office in a democratically elected government,” said Wang, as reported by The Guardian.

In recent months, Hong Kong has undergone a dramatic transformation, seeing its once mostly independent institutions such as schools, legislature, and news media, all come under more control of the Chinese government.

— Article continues below Petition —
PETITION: Support Cardinal Zen's plea to stop the "murder of the Church in China"
Show Petition Text
22121 have signed the petition.
Let's get to 25000!
Thank you for signing this petition!
Add your signature:
Show Petition Text

In December, prominent Catholic media mogul Jimmy Lai was arrested in Hong Kong after he allegedly was caught committing fraud.

Retired Hong Kong bishop Cardinal Joseph Zen has been a top critic of the persecution of China’s Catholics. He has spoken out harshly against the Vatican-China deal, saying it is “the murder of the Church in China,” and that it showed the Vatican “selling out the Church to China.”

Zen also called out China’s national security law. He said in a recent interview that it makes it easier for the Chinese Communist Party to go after city protestors and further erodes the independence of Hong Kong.

“I went through the whole text of the law,” said Zen in an interview with EWTN’s Raymond Arroyo. “It’s easy to tell you in just one sentence: ‘Now they can do anything,’” he added.

“We are at the mercy of this new commission … We don’t have religious freedom because we don’t have freedom.”

In December, the CCP replaced all traces of religious references with CCP-style alternatives at a well-known Catholic pilgrimage site, which was done as part of increased targeting of the Catholic Church after the Vatican signed a secret deal with China.