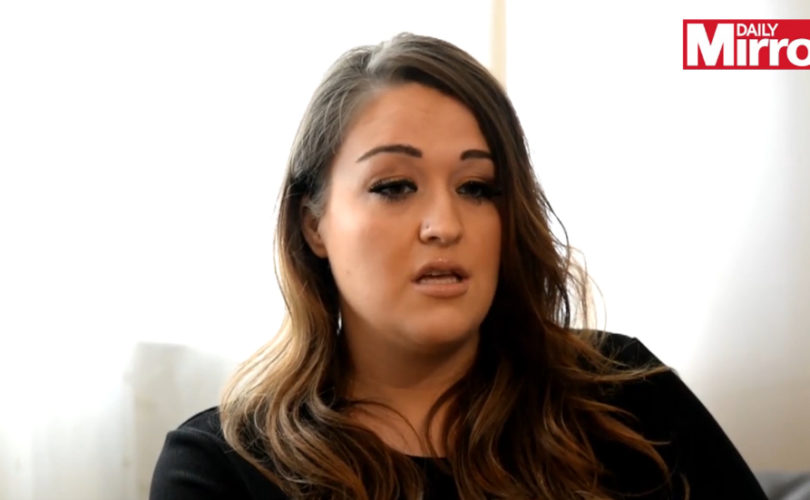 'I couldn’t even see through the tears of joy,' Nicholson said after finding out her baby was miraculously still alive.The Mirror video screenshot

(LiveActionNews) – A UK mother is now terrified for her child’s life and health after doctors wrongly gave her the abortion pill. According to the Daily Mirror, at eight weeks, Rachel Nicholson visited the hospital to obtain advice on pregnancy. Nicholson, 23, was required to have an ultrasound to confirm that she was pregnant, but during the procedure, the nurse gave her heartbreaking news.

“She said to me that she couldn’t find a heartbeat and that the baby had shrunk in size,” explained Nicholson.

Since Nicholson had a previous miscarriage, she felt that a similar tragedy was taking place once again.  Nicholson did what the doctor recommended and took a pill to expedite the miscarriage – the same one that women seeking first-trimester abortions often take.

Nicholson returned home, but described the pain and agony she experienced afterwards, noting that it “felt as though her insides were falling out.” Daily Mirror reports:

“It was the most traumatic experience of my life, ” Nicholson said. “It was something that I’ll never be able to explain or describe to anyone. It was kind of like a horror show. […] Obviously I thought I was having a miscarriage.”

Three and a half weeks later, Nicholson collapsed.

She went to the hospital where she a received a positive pregnancy test. A nurse did an ultrasound and apologetically informed Nicholson that she was 12 weeks pregnant. This nurse, believing Nicholson had an abortion, showed her the ultrasound screen.

“But I couldn’t even see through the tears of joy,” said Nicholson.

She was extremely happy, but the doctors informed her that her child may have disabilities, both physical and mental from the abortion drug. They asked her if she would like to abort, but she refused, telling the Daily Mirror:

“I also felt so proud of the baby because I thought, How on earth did you survive that?”

Nicholson is now 18 weeks pregnant, and she says she suffers daily from anxiety and depression. She is so frightened for her child that she wakes up in the middle of the night afraid that her baby may have passed away. She said she feels as though she’s been deprived of the joys of pregnancy.

While Nicholson will not know until her child is born whether there are any lasting effects from the abortion pills,  she doesn’t feel she is receiving proper support from the hospital. Even in the midst of the difficulty, Nicholson says she is very much excited to be a mother.