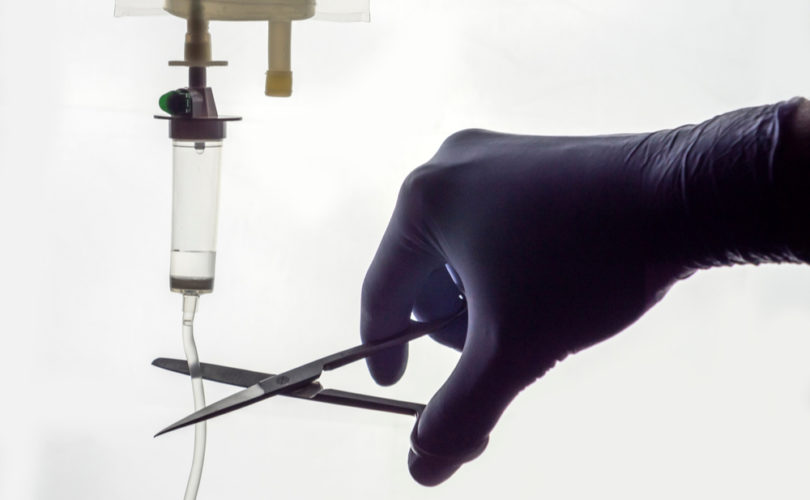 “We have sent thousands to people all across Canada. There is a palpable feeling among our supporters, of all ages, that they need to protect themselves,” Ireland told LifeSiteNews.

The DHS’s new DNE is a legal document protecting people against attempts to have their lives “terminated unnaturally” through lethal injection.

The DNE was officially launched in the early summer of this year.  Ireland said at the time that it was a “proactive response to those who think that our people have no right to medical treatment or to life itself.”

Ireland told LifeSiteNews that she believes the demand for the DNE is due to people realizing “that nationwide our medical system is not only broken but broke.”

“While we the people trusted that our tax dollars were going to be managed appropriately for services to keep us well, we find that our money has been squandered and medical professionals fired. Perhaps [the health system thinks] the most expedient way to balance the budget, and the backlog, is to eliminate the expensive patient altogether,” noted Ireland.

— Article continues below Petition —
PETITION: Demand the Conservative Party apologize for not resisting Trudeau's COVID regime
Show Petition Text
4427 have signed the petition.
Let's get to 5000!
Thank you for signing this petition!
Add your signature:
Show Petition Text

According to Ireland, there has been no new funding, in British Columbia, for “palliative care services but a disproportionate attention to increasing MAiD (Medical Assistance in Dying) teams to carry out their work.”

“Further, we see the eligibility for palliative care services being slashed from 6 months life expectancy to 3 months. What part of this national betrayal is simply cost-saving measures by the government?” she wondered.

Ireland told LifeSiteNews that the DNE is giving “people comfort that they can not only protect themselves from euthanasia but be in a position to demand palliative care.”

“If we hold the medical system to account and not allow it to kill us so easily, perhaps they will be forced to care for us,” she added.

The Delta Hospice Society’s new DNE is available to all society members at no cost. Membership for DHS costs $10 per year.

In addition, the DHS recently  released a new promotional video emphasizing the importance of protecting against attempts to have one’s life “terminated unnaturally.” The organization hopes that the short film will help spread the message of protecting life until one’s natural death.

In April of this year, the DHS scored a huge win for life at its annual general meeting: it elected a fully pro-life board and voted in a new constitution which affirms life to its “natural end.”

The Delta Hospice Society had earlier urged all of its pro-life members to attend the annual general meeting to ensure enough votes to pass a revised constitution and bylaws that “affirm life to its natural end.”

Euthanasia was legalized in Canada by the Liberal Party under Prime Minister Justin Trudeau in 2016 with Bill C-14.

In recent weeks, the Trudeau government said it would be expanding the nation’s assisted suicide law, starting in 2023, to include those with mental illness.

This had some politicians, such as Conservative Party of Canada MP Leslyn Lewis and People’s Party of Canada leader Maxime Bernier, calling out Trudeau’s expansion of the nation’s assisted-suicide laws.

Bernier said last month said those pushing euthanasia on the vulnerable should be held “criminally responsible” for their actions.

Lewis recently said Canada’s expanded euthanasia laws are a “betrayal” of the “vulnerable.”