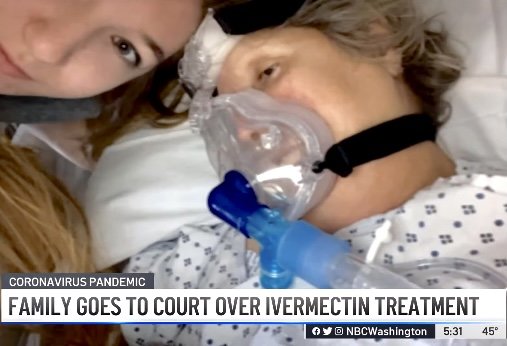 Kathy Davies is a Catholic wife and mother of five children and 10 grandchildren who has been receiving treatment for COVID-19 at Fauquier Health for several months.YouTube

(LifeSiteNews) — A Virginia hospital agreed to permit a COVID-19 patient to receive ivermectin after concerned family members filed a legal challenge against the hospital for initially refusing to give the woman the benign drug that has been shown to alleviate coronavirus symptoms.

The move came after a court found the hospital to be in contempt and threatened fines of $10,000 per day if they refused to obey prior orders to provide the desired treatment option.

The development underscores the value of taking legal action to defend medical freedoms and may serve as a warning to other hospitals that attempt to deprive patients of their right to try safe medical products not included in the hospital’s protocols.

Kathy Davies, a Catholic wife and mother of five children and 10 grandchildren who has been receiving treatment for COVID-19 at Fauquier Health for several months, was given her first dose of ivermectin on Monday night thanks to the court’s action.

“Kathy just started on her ivermectin last night, and that’s by the power of prayer,” a family friend (who asked to remain anonymous) told LifeSite in a phone interview Tuesday.

The Daily Wire reported that Virginia’s 20th Judicial Court found Fauquier Health in Warrenton, Virginia in contempt of court on Monday for failing to comply with previous orders to supply the treatment as requested.

In response to the court’s finding, the hospital moved to allow the use of ivermectin on December 13 rather than face a $10,000 per day fine that would have been retroactively imposed by the state beginning December 9.

News of the legal victory comes after Kathy’s husband Donald and son Chris, who works as a radiologist in the hospital, launched a legal battle earlier this month to push the hospital to allow Kathy to try ivermectin.

The family decided to take action after the standard protocols used by the hospital, including placing Kathy on a ventilator November 3, failed to produce positive results. The Davies’ family friend said the hospital had also been giving her Remdesivir, which some experts warn could increase the risk of renal failure and liver failure.

Meanwhile, several studies have shown that ivermectin, a widely-used generic drug that has been approved by the Food and Drug Administration (FDA) for several uses in humans, can be an effective treatment for COVID-19.

Federal regulators and drug makers have nevertheless aggressively suppressed the medication, though various leading experts like Dr. Peter McCollough, Dr. Vladimir Zelenko, Dr. Robert Malone and the 12,700 doctors and scientists who signed the Rome Declaration have endorsed it as a COVID treatment.

However, despite the endorsement of the drug by credentialed experts and Kathy’s steadily-deteriorating condition, Fauquier Health rejected the family’s request to try ivermectin.

That’s when the Davies family decided to take the matter to court, notifying the hospital on December 3 that they were hiring attorneys and filing a lawsuit on Kathy’s behalf.

One of the lawyers representing the family is Ralph C. Lorigo, a New York-based attorney who has won multiple cases pushing hospitals to allow patients to receive ivermectin, including a recent case in Pennsylvania.

Responding to news of the victory in the Davies’ family’s case, Dr. Pierre Kory wrote in a Twitter post on Monday that “Lorigo has won almost all of his MANY cases suing to get [ivermectin] to dying patients.”

“Every time the hospital refuses, delays or appeals,” Kory said, adding, “Now [it’s] THEIR turn to pay … instead of the patient.”

Referring to the court’s ruling Monday stating that the hospital would owe retroactive fines of up to $10,000 if they continued to refuse Kathy Davies the right to try ivermectin, Kory added, “One hospital will owe 50K if [ivermectin] not given by 9pm. Gee, I wonder what they’ll do?”

Attorney Ralph Lorigo has won almost all of his MANY cases suing to get IVM to dying patients. Every time the hospital refuses, delays or appeals. Now its THEIR turn to pay… instead of the patient. One hospital will owe 50K if IVM not given by 9pm. Gee, I wonder what they’ll do? https://t.co/IgAZlu8bsP

On December 6, the court ruled that under Virginia law Kathy had the right to try ivermectin, which could be administered by Dr. Martha Maturi, a doctor retained by the family who had first recommended the drug.

The court’s ruling apparently went unheeded by the hospital, with administrators blocking Chris and a registered nurse from giving Kathy ivermectin on December 7. The hospital notified Chris that they had filed an emergency hearing with the court to try to reverse the prior ruling permitting distribution of the ivermectin.

On December 9, the court issued another ruling, but not in favor of the hospital.

Judge James P. Fisher affirmed that Dr. Maturi could administer ivermectin to Kathy, arguing that Fauquier Health’s reasons for blocking the treatment were inadequate while declining to “descend into an analysis of the merits of ivermectin as a treatment protocol.”

Fisher said the hospital would need to make “all reasonable effort” to facilitate the desired treatment.

Despite the court’s decision, the hospital still failed to fully comply with the court’s orders, with the attorneys for the hospital and the Davies family spending the weekend in back-and-forth discussions about malpractice and liability.

Refusing to give up, on December 13 the attorneys for the Davies family argued that the hospital should be held in contempt of court for being unreasonable in providing care for Kathy Davies and adhering to the wishes of her family.

“Judge Fisher agreed and ruled on Monday that the hospital could appeal the order, comply, or face the 10K per day fines,” the Daily Wire reported.

As of Monday, Fauquier Health complied with the ruling. After 41 days on a ventilator, Kathy received her first dose of ivermectin and is due to continue receiving the treatment.

But for the Davies family, the fight with the hospital is not over.

Kathy is still in the hospital, and a spokeswoman for Fauquier Health released a statement on Tuesday announcing that the hospital requested the court purge its contempt of court ruling.

Nevertheless, the Davies’ family friend told LifeSite she has hope that the victory upheld thus far will help other families in similar situations who are seeking to try ivermectin or other therapeutic drugs to treat COVID-19.

“People are just going to the hospital and they’re just [getting] the same protocol that everyone’s going through,” she said, pointing out that Kathy’s family’s success could lead to similar successes for other families.

LifeSite readers have been asked to pray for the family as Kathy responds to the new treatment.