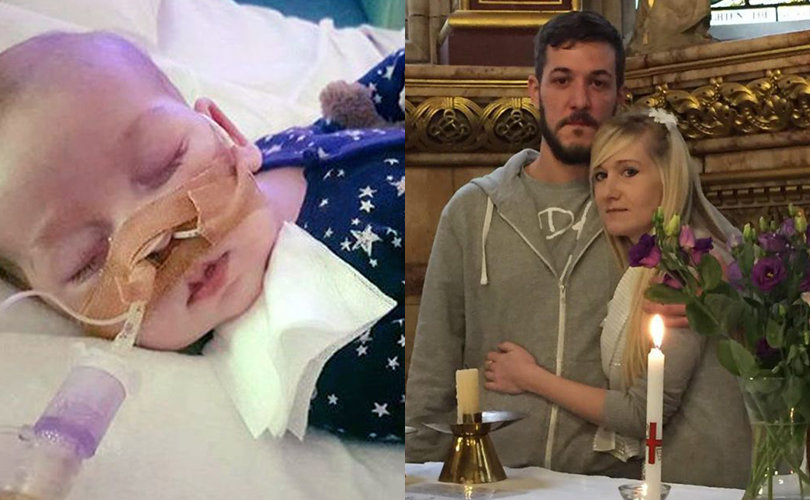 LONDON, England, July 25, 2017 (LifeSiteNews) – Great Ormond Street Hospital argued in court today that Charlie Gard's parents, who ended their legal fight to save their son from being removed from his ventilator, shouldn't be allowed to take him home to spend his final hours.

It's “absolutely tragic … to see the hospital fight over this issue,” human rights activist Rev. Patrick Mahoney, who is in England helping Charlie's parents, told LifeSiteNews.

Chris Gard and Connie Yates fought for months in British and European courts for the right to take their 11-month-old son, Charlie, to another hospital for treatment for his rare mitochondrial disease. Great Ormond Street Hospital (GOSH) argued that its bureaucrats, not Charlie's parents, should decide his fate. GOSH wanted to remove his ventilator.

Chris and Connie raised more than $1.5 million to transfer him to the U.S. Had Charlie been allowed a transfer months ago, his parents believe cutting-edge treatment could have greatly improved his life.

They announced Monday that they were ending their battle to allow Charlie to be transferred because tests from an American doctor showed Charlie's muscles had been allowed to deteriorate too much while the case was in court. Had the doctor been able to treat Charlie earlier, they say it would not have come to this.

“If Great Ormond Street Hospital had allowed Charlie's parents, which they maintained all along, to go to New York to seek this cutting-edge medical treatment, Charlie most likely would be greatly improved right now,” Mahoney said in a Facebook live video outside the Royal Courts of Justice. Now, GOSH is continuing its “extremely distrubing” pattern of arguing against Charlie's parents' rights, he said.

“Great Ormond Street Hospital, which is considered one of the finest children's hospitals in the world, just said in open court they did not want to transport Charlie home to his parents to spend his final hours with them,” said Mahoney. He said “as a parent and grandparent,” it was hard to believe GOSH was arguing this. The court is currently on a short break. Mahoney asked pro-lifers across the globe to pray that Charlie's parents prevail.