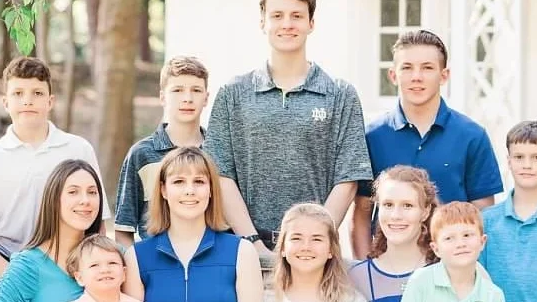 The Hicks family with Yulia in the centerGiveSendGo

(LifeSiteNews) — A 14-year-old rescued orphan from Ukraine has been denied a life-saving kidney transplant because her parents will not have her “vaccinated” with a COVID injection.

“I feel the same about this for my daughter Yulia as I do any of my eight biological children or other adopted children. Yulia is my child, and I am afraid that the COVID shot will kill her,” Chrissy Hicks told National File, adding that she has “done the research” on the issue and has a medical background.

Yulia has Senior Løken syndrome, a rare genetic condition in which the kidneys and eyes gradually fail. She is currently on dialysis and needs a kidney transplant to live.

Despite previously being told by a doctor at Duke Children’s Hospital that so-called COVID “vaccines” were not required for kidney transplants, Chrissy and Lee Hicks were informed in November that Yulia needs the jab to receive a kidney transplant.

Chrissy explained that on October 7, she and her husband spoke to “many doctors” at Duke and told LifeSiteNews that they were given conflicting accounts of the requirements for kidney transplants.

While Dr. Eileen Tsai Chambers, a pediatric kidney transplant specialist, said the COVID jab was required for such a transplant, Dr. Daniel Chang said the jab was “highly recommended” but not mandatory, and that “families had gotten transplants without it.”

Then, on November 9, wellness coordinator Catherine Thomas emailed the parents, informing them in a first email about what was “recommended” for the transplant surgery, and in a second email with “different verbiage,” what was “required” for the operation.

Chrissy told LifeSiteNews that the selection criteria for kidney transplants did not specifically mention COVID “vaccination” but indicated that “medical recommendations” were to be adhered to.

On November 10, Yulia was flat-out denied a kidney transplant by the hospital committee charged with its oversight because her parents would not have her “vaccinated” against COVID.

The denial culminated in a phone call on November 29 during which Chambers told the Hicks that COVID shots are now “recommended” for pediatric kidney transplants because the CDC now “recommen[ds]” the shots for “all ages.”

“Because otherwise it wouldn’t be medically safe for her to be transplanted,” Chambers told the parents.

Lee maintained that they themselves were willing to take on any risk involved in the surgery, Yulia being unvaxxed, but Chambers insisted, “The risk is on our center as well because we have seen people, not here but at other places not getting vaccinated, and they have a poor transplant outcome.”

Chambers later admitted that at Duke, before the jab was available, they were able to give patients “other treatments that were okay,” and that the patients are “still okay.”

Chang said during the call that the immunosuppressive treatments given to patients after kidney transplants renders them “vulnerable,” in an apparent attempt to help justify the jab requirements.

“So if it shuts down natural antibodies how does it not shut down antibodies from the vaccine?” Chrissy asked.

“That’s a great question. That’s why we want them to get vaccinated before the autoimmune suppression,” responded Chambers, adding that “transplanted patients” have a less “normal” immune response to the vaccine than those on dialysis, which she suggested is why Yulia should be jabbed before the surgery and not afterward.

“But that doesn’t answer the question,” Chrissy responded, maintaining that “immunosuppressive drugs should shut down” any antibodies, whether they are naturally occurring or induced by the jab. “I don’t understand how the vaccine is giving any extra protection,” she added.

“Well, because it boosts her immunity,” replied Chambers, without any further attempt at an explanation.

The Hicks underscored the fact that while Chambers kept describing the COVID injection as a “recommendation,” they were in fact communicating that it was a “requirement.”

“You’re basically saying it’s a requirement. It’s not really a recommendation,” Lee pointed out to Chambers.

“Well, I can’t require you to do anything. I can recommend these things. But if you don’t follow our recommendations then Yulia can’t be a transplant candidate here,” she retorted.

Chrissy told LifeSiteNews on Thursday, “The reason why we’re bringing this to the public is because this is really bigger than Yulia, it’s bigger than us. This is about medical freedom that we’re losing in America every day. The line has been drawn in the sand. And if we don’t stand up now, the time may come where we can’t stand up.”

“If we don’t have the right to choose what is injected into our body, then we’ve lost our rights altogether,” Lee added.

“We hope that whatever we find out or whatever we can change will help other families in our situation as well,” Chrissy said.

A GiveSendGo fundraiser has been set up to help pay for travel and lodging expenses not only for Yulia and her mother but also her potential donor, since the family is now forced to look for transplant opportunities out of state.

LifeSiteNews reached out to Duke Children’s Hospital for comment but did not receive an immediate response.

Abundant evidence has emerged since the COVID mRNA injections were rolled out in 2021 that they have corresponded with an unsettling number of life-disrupting severe side effects, as well as deaths.

For example, excess life insurance death claims spiked 37.7% in the third quarter of 2021 over a pre-pandemic baseline (2017-2019) according to a January 2022 report issued by the Society of Actuaries Research Institute (SOA).

“Just to give you an idea of how bad that is, a three-sigma or a one-in-200-year catastrophe would be 10% increase over pre-pandemic,” Davison said. “So, 40% is just unheard of.”

Significant spikes in excess non-COVID death rates have similarly been observed across the world.

The opinion that the COVID jabs and worldwide increase in sudden deaths are linked is held by top cardiologists. Dr. Peter McCullough and British cardiologist Dr. Aseem Malhotra are featured in a video released by the Vaccine Safety Research Foundation saying that “until proven otherwise” it must be assumed that the experimental COVID jabs are to blame for the massive uptick in sudden excess deaths in the young.