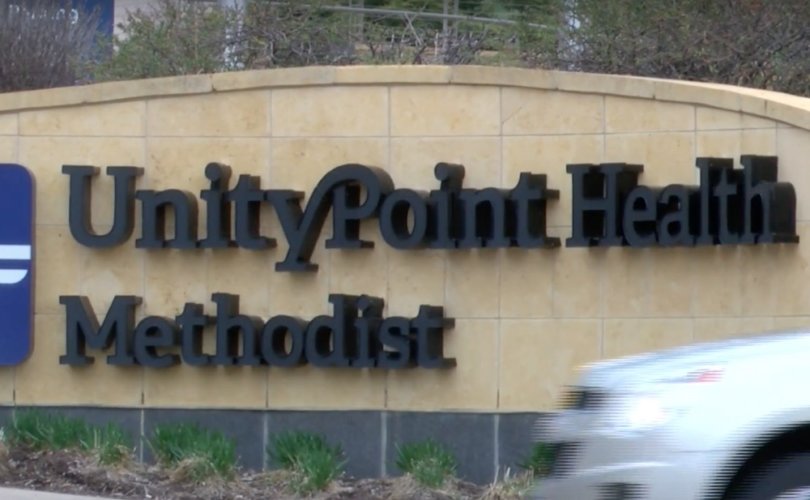 PEORIA, Illinois, April 12, 2019 (LifeSiteNews) — An Illinois woman has filed a lawsuit against a Peoria hospital for allegedly pressuring her to abort her wanted baby to avoid liability for having accidentally administered a drug that could have caused severe birth defects.

Reneizha Morris says that in November 2017, during a routine appointment at UnityPoint Health-Methodist’s area hospital, she learned she was pregnant with a healthy 7-week-old baby, ABC reports. But due to a “miscommunication,” she was allegedly injected with Methotrexate, which can cause severe birth defects.

Morris says the doctors held two meetings with her to inform her about the risks. She still wanted to give birth, but the hospital’s risk manager led her to schedule an abortion on November 29, which she refused after seeing an ultrasound of her child. Yet the risk manager allegedly called her family multiple times to keep pressuring her to abort, going so far as to offer her $2,000 for a consultation at a Planned Parenthood location in Chicago.

Morris ultimately gave in and had her baby aborted on December 17, which her attorneys suggest she wouldn’t have done without the hospital’s repeated pressuring to do so — or if the hospital had informed her that because it had given her the wrong drug without warning her of the risks, it would be the one covering her child’s medical expenses.

The suit, filed Thursday in Peoria County Circuit Court, seeks more than $50,000 in damages from UnityPoint Health. Several other individuals are named as respondents in discovery and could be added to the suit.

“This case has one of the ugliest fact patterns I have ever seen. A perfectly healthy fetus was given a deadly injection based on reckless communication,” family attorney Thomas R. Mulroy III said. “The hospital administration knew full well they would have been legally responsible for the considerable healthcare costs associated with the baby’s birth injury. The hospital purely had their own interests in mind and failed to take Reneizha’s wishes into consideration.”

“Patient privacy laws prevent us from discussing any individual’s care,” a hospital spokesperson responded in a statement to Becker’s Hospital Review. “At UnityPoint Health, we respect all patient rights in every aspect of the care we provide.”

Morris, who has two boys and was looking forward to adding a girl to her family, says she is heartbroken by the situation. “No one should ever have to make that decision,” she said. “I think about what happened every single day and I hope another woman will never have to feel the pain I have felt since this happened.”