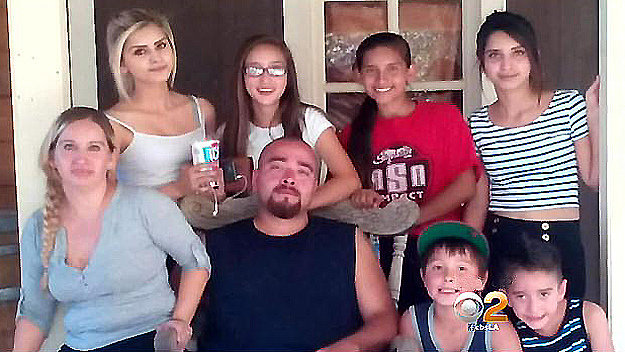 Lisa Avila with her husband and children during happier times

In February, Lisa Avila had a heart attack, a complication from an ectopic pregnancy. Now, doctors at Anaheim Regional Medical Center (ARMC) say Avila is brain dead, and are trying to withdraw treatment within the next few hours against the wishes of her husband and family.

Avila's husband, Roberto Chavez has accused doctors at ARMC of misdiagnosing and not properly treating her ectopic pregnancy, which led to her heart attack. He is also demanding that they continue treatment to sustain her life, despite the declaration that she is brain dead.

“When we talk to her, she reacts to us,” said Avila's aunt, Jessica Jule. “She’ll move her fingers when I hold her hand. Those are all stimulations from her brain.”

Hope is slipping away from Avila's family, including her seven children, however — doctors say they want to remove her ventilator at 4:00 p.m. today, Pacific Time. But her family refuses to give up, saying they want to transfer her to a long-term care facility.

However, such a transfer requires a hospital-provided document, which the ARMC has not provided, says Avila's lawyer. Chavez has therefore refused to leave his wife's side. “However long it takes, I’m gonna be here with my wife. I just want her home with us,” he said.

Anti-euthanasia activist Alex Schadenberg told LifeSiteNews, “if she's actually dead, withdrawing treatment is ethical. If there is doubt as to whether she is actually brain-dead, there will be nothing the family could do to keep her alive if she has passed away.”

“We don't know the details, but given the short timeline, and given the family's willingness to transfer her and take care of her, the hospital should agree to the transfer.”

In recent years there have been numerous stories that have emerged of people being declared “brain dead” or in a “vegetative state” who have subsequently recovered and revealed that they were fully aware of what was going on around them. Other cases have involved disputes between health care facilities and various family members about whether the patient is truly brain dead.

One recent case that has garnered support from life activists is that of Jahi McMath. McMath was declared brain-dead in 2013, but her family fought to keep her alive and in their care.

In one particularly chilling case, a young man, Zach Dunlap, revealed that he was fully conscious as doctors and his family members discussed how they would donate his organs. Only moments before he was scheduled to be wheeled into the operating room to have his organs removed, a family member dug a fingernail under his toenail, causing a sudden reaction. The surgery was called off, and Zach recovered.

Cases like these are fueling a growing debate about the accuracy of “vegetative state” and “brain death” diagnoses.