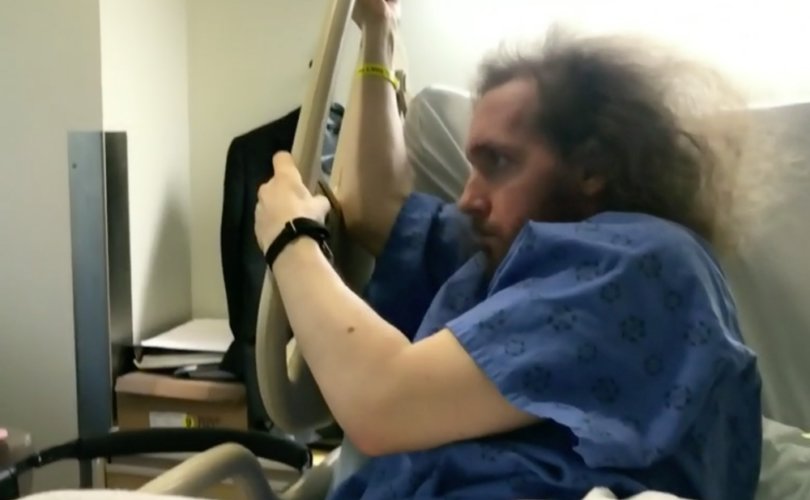 LONDON, Ontario, August 14, 2018 (LifeSiteNews) – A Canadian man is suing a hospital for offering him euthanasia despite his repeated requests for support so that he might live at home. He has released recordings of conversations that he says proves he was denied his right to “assisted life.”

Roger Foley, 42, has cerebellar ataxia, a degenerative brain condition that impairs his ability to move his arms and legs. He needs home care to live independently, CTV News reported.

He launched a benchmark case in February against Victoria Hospital London Health Sciences Centre, as well as two health care agencies, and the Ontario and Canadian government, claiming health officials have refused his request to live at home and be in charge of directing his own care.

Foley, who has been in the hospital for more than two years, claims in his lawsuit he was endangered by the care he previously received at home from the government-funded agency South West Local Health Integration Network.

“I have been given the wrong medications, I have been provided food where I got food poisoning, I’ve had workers fall asleep in my living room, burners and appliances constantly left on, a fire, and I have been injured during exercises and transfers,” Foley alleged.

“When I report(ed) these things to the agency, I would not get a response.”

Although euthanasia is legal in Canada since June 2016 for adults who request it and are deemed to have a “grievous and irremediable medical condition,” Foley has been clear he does not want to be killed.

But he says in his lawsuit the hospital offered him euthanasia.

Last week he sent audio recordings to CTV to back up his assertion, along with a statement that he decided to release the recordings “to all Canadians as my situation got very bad recently where I almost died.”

While “not in a position to elaborate on that currently,” Foley added, he wanted to let people know “the real truth before it is too late for my voice to be heard.”

“It is the real truth of what is going on in Canada regarding so many assisted deaths without appropriate safeguards, in combination with the lack of necessary care that is not being provided to persons who are suffering,” Foley says.

In the recordings, two staff at London hospital bring up euthanasia, or “medical assistance in dying” as an option, CTV reported.

In a September 2017 recording, the man tells Foley he may have to pay “north of $1,500 a day” to stay in hospital, to which Foley expresses shock and says he’s read the Ontario health minister says it’s “not legal” for hospitals to coerce patients.

The hospital does this “only in situations where somebody has a plan in the community that is feasible that they’re not going to accept and that’s OK,” the man says.

“You have already violated my preferences…So what is the plan that you know of?” Foley asks.

“Roger, this is not my show,” the man replies. “I told you my piece of this was to talk to you about if you had interest in assisted dying.”

The second conversation takes place in January 2018, in which a man asks Foley how he’s doing and if he feels he wants to harm himself.

Foley responds that he’s “always thinking I want to end my life” because of how the hospital is treating him and because he’s been denied self-directed care.

The man tells Foley he can “just apply to get an assisted, if you want to end your life, like you know what I mean?”

When Foley responds that he’s being compelled to end his life, the man demurs.

“Oh, no, no, no,” he says on the audio recording. “I’m saying if you feel that way … You know what I mean? Don’t get me wrong. I’m saying I don’t want you to be in here and wanting to take your life.”

Alex Schadenberg, executive director of the Euthanasia Prevention Coalition, which has launched a petition in support of Foley, warns Foley’s case shows what happens when euthanasia is legalized.

“The opposite side argues that it was their right to die, but in fact, now that we’ve legalized it, the question is protecting your right to live,” he told LifeSiteNews.

“It’s just the beginning, because when we look at the Netherlands and Belgium, the data shows that every year, there are significant numbers of euthanasia deaths without request,” added Schadenberg.

“You can see the kind of pressure that occurs once you’ve legalized euthanasia,” Schadenberg warned.

“You are giving far too much power over life and death to physicians when you say to them, you have the right to kill your patients, and that is of course actually what happens with euthanasia.”